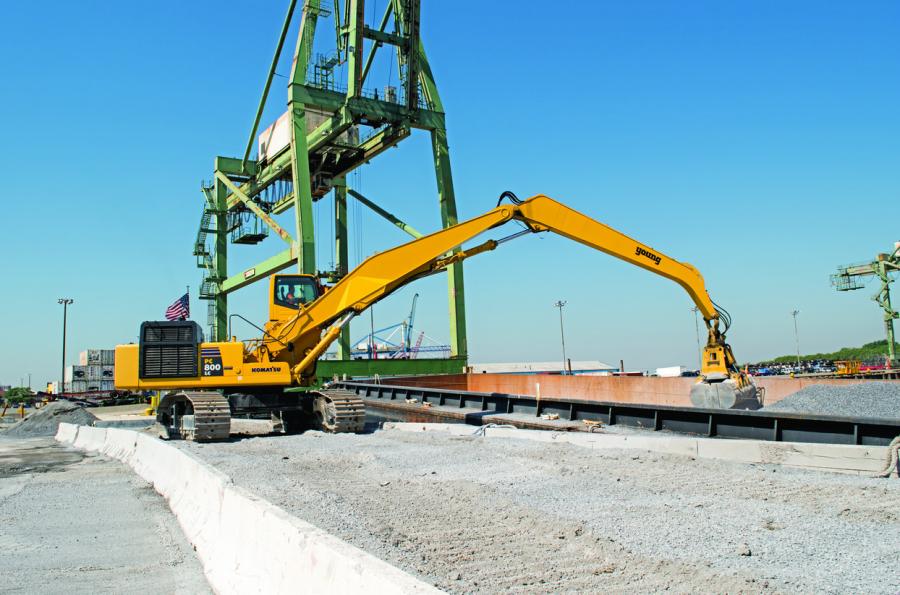 This Divine Management operator uses the company’s Komatsu PC800LC-8 excavator to unload a barge at its Brooklyn location. The company outfitted the excavator with an extended boom, a clamshell bucket and an extended cab to maximize efficiency and visibility when unloading material from barges.

Growing up in Salerno, Italy, Alfredo Lamanna always wanted to have his own trucking company. It was a dream that took him three continents and eight years of tossing pizzas to attain, but once he did, he never looked back.

“Our father was determined to get his own truck and make a go of it,” recalled Dino Lamanna, Alfredo's son and a Member of Divine Management. “In 1955, he moved our family to Venezuela and started a business, but returned to Italy due to political turmoil. He had a business in Italy, too, but the market was poor and there wasn't a future in it. Eventually, we moved to New York, where he had to work in a pizzeria for eight years. He hated each day of it, but he did it to support our family.

“He spent every free minute driving through all of the boroughs, learning how to get around properly and learning the language, so he'd be ready once he got his truck,” Dino added. “In 1972, a customer saw an honest future in my father and gave him a loan on a handshake. That was all he needed, and we're here today because of my father's vision and a stranger's generosity.”

The Lamanna family witnessed Alfredo's determination, and it's a trait that endures as they have entered the family business. Today, Dino's brother, Emilio, is an owner of Divine Management. Dino's daughter, Gena, and son, Alfredo, serve as bookkeeper and plant manager, respectively. In addition, Dino's sister, Rossana Bortone, is president of Almar Supplies Inc., a sister company that focuses on material hauling.

“We don't see this as a business, but rather a lifestyle,” said Dino. “My siblings and I didn't come to it on a whim. We are part of the business because we love it. Dad didn't have us here until we knew this is what we wanted to do — then he gave us the worst of the worst jobs. We worked our way up, but so did he. It's something we've passed on to the next generation as well. If they want to work here, great, but we want them to understand that they're going to miss out on things and be here on nights and weekends. That's what's expected when your name's on the company. It's more than a job.”

Even though Alfredo passed away in 2004, his presence is felt throughout the company to this day.

“We still visit customers and the first thing they say is how much they miss Dad,” shared Dino. “It's his memory that drives us. He loved this company, and we come here every day to make him proud.”

From the years when the elder Alfredo hauled material with one truck in Queens, the Lamanna family business has evolved into a multi-faceted aggregate service with customers throughout the five boroughs.

“Three years ago, we launched Divine Management after growing Dad's original business into a full-blown, aggregate-transfer station,” said Dino. “We found a site in Brooklyn along the water, and we developed a partnership with a company upstate that barges aggregate material to our location.”

Divine Management typically handles five varieties of stone, ranging from three-quarter-inch to three-eighths-inch, in addition to finer materials and custom-made products for customers.

“We unload the barges at our site, stock pile the aggregate in bins and then load trucks for delivery,” he continued. “Nearly 90 percent of the material is delivered via our sister company, Almar Supplies, but we do have customers who come with their own trucks.”

Despite being a new company, Divine Management achieved early success thanks to an extensive background in the industry and a dedication to customer service.

“Since we've been in operation, we've seen some growth, which is fortunate in this industry because there is a lot of competition,” explained Dino. “We're focused on a gradual build by going the extra mile for our customers. If that means deliveries at midnight or on weekends, we do it. My dad built his reputation one customer at a time, and that's what we're doing here, too.”

When Divine Management opened its location, it needed an equipment upgrade. To do that, it turned to Edward Ehrbar and Sales Rep Steve Gambutti for a Komatsu PC800LC-8 excavator and a pair of WA500-8 wheel loaders.

“We went with a PC800LC with an extended boom and cab and a three-yard clamshell bucket,” stated Dino. “It's been everything Steve promised. We went from taking an entire day to unload one 900-yard barge to doing two 1,400-yard barges with no problem. It's a big, beautiful, powerful machine. I look forward to the days that I operate it. I get in, crank up my music and I'm in my glory.”

“It's like playing a big video game,” joked Alfredo. “The controls are smooth, and it's very comfortable. The visibility from the extended cab is fantastic, plus we installed a camera on the elbow of the machine, so we can see all the way inside the boat.”

“The WA500s are a dream to operate,” said Dino. “They have it all – maneuverability, power and size. They don't strain when we drive them into the pile or bounce when we carry a full bucket. Now, we can fill a truck in four passes instead of five, thanks to the WA500s.”

With space at a premium on the busy 2.5-acre site, employee well-being is always a top priority. All three of Divine's Komatsu pieces have helped to make the site more productive and provide greater comfort for employees.

“The cab, mirrors and rearview camera on the PC800 give the operator a clear picture of the area around them,” noted Alfredo. “The wraparound windshield and handling of the WA500s are amazing. You can see everything from the cab and really get into some tight places, which makes a big difference.”

While the Komatsu machines are producing on the ground, Divine Management appreciates all that Ehrbar and Gambutti do behind the scenes as well.

“We couldn't do what we do without Ehrbar and Steve,” said Dino. “We consider them a partner in our business. We can call Steve at any time of the day, and he gets us an answer. He helped us when others wouldn't, and we remember that. It's a relationship we value.”

The name and focus may have changed since the days when the company's founder drove his truck, but the family will always emphasize customer service and a tireless work ethic.

“Our goal is to be a successful company with good people,” commented Rossana. “Dad instilled strong values in us, and we think that comes through in our long relationships with customers and employees. We appreciate our customers, suppliers and employees. We wouldn't be where we are without them.”

Dino said that longtime employees who have been with the company for 15-20 years, including Reynold Moonilal, Garfield Simpson, Ivanhoe Thompson, Robert Guest, Augie Estevez, Denzile Buckle and Edward Rosa, are just as central to the company's fabric as the generations of Lamanna family.

“We try to treat people the right way, and we see our employees as family members,” he added. “They are the key to our success. We can continue to grow and have success because of them.”

(This story was reprinted with permission from Ehrbar Advantage Magazine, Sept. 2017 issue.)