Doggett, John Deere Pair Up for Habitat for Humanity 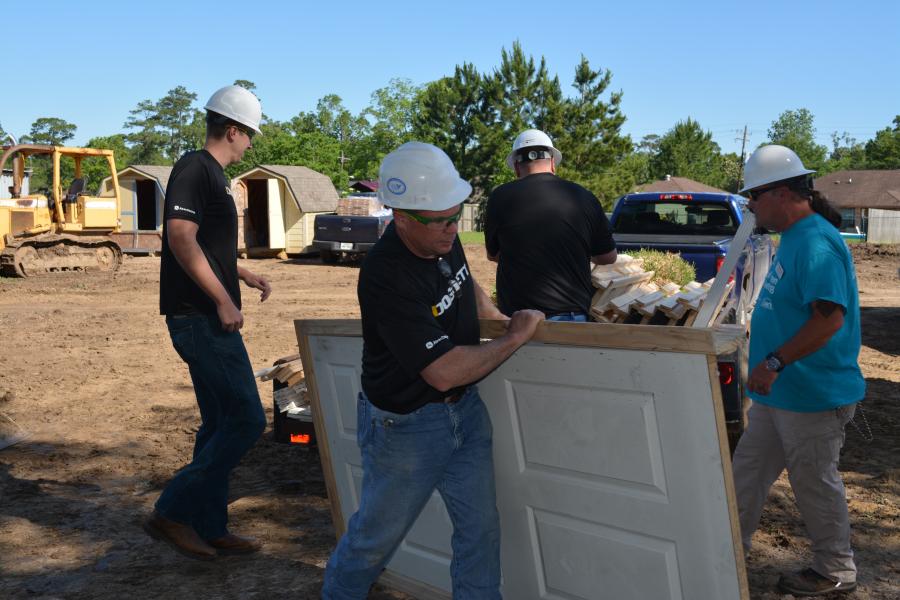 Mike Ortiz, vice president of Doggett’s construction and forestry equipment division, led a team of about 20 volunteers from Doggett at a Habitat for Humanity jobsite in Beaumont, Texas.

For Habitat for Humanity to continue the important work it has done for decades requires the assistance of many stakeholders, especially those businesses that take community stewardship seriously.

One such business, Doggett Machinery Services, recently demonstrated its commitment to the east Texas communities that were devastated by Hurricane Harvey nearly two years ago. 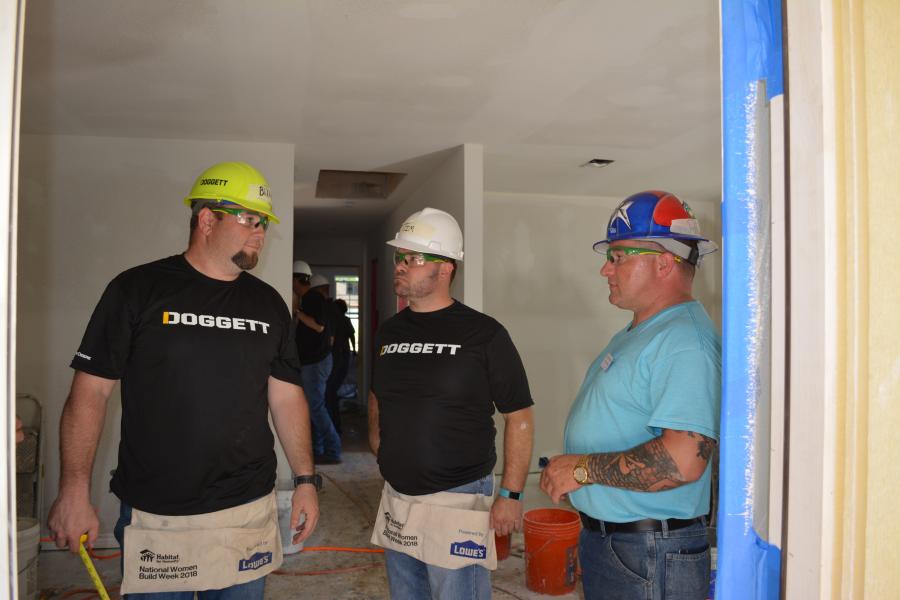 Alongside several employees from John Deere, about twenty Doggett employees spent an entire day assisting Habitat on a build in Beaumont, Texas. Doggett also donated equipment for use on the project.

Donated labor included painting, landscaping and finish trim work on a house that will be home to a single mother and her three daughters who lost their rental property in the hurricane.

According to Mike Ortiz, vice president of Doggett's construction and forestry equipment division, the Habitat project was a continuation of the company's earlier involvement in the rescue and recovery relating to Harvey.

"Doggett was involved from the get go as far as recovery efforts right after the storm. We were involved with cleanup efforts with our equipment. We also were involved in the rescue efforts, especially in the Beaumont area. We donated use of articulated dump trucks which could go through extremely high water to bring out people and their belongings. The Habitat opportunity came along and gave us another way to give back to the communities we are a part of," he said. 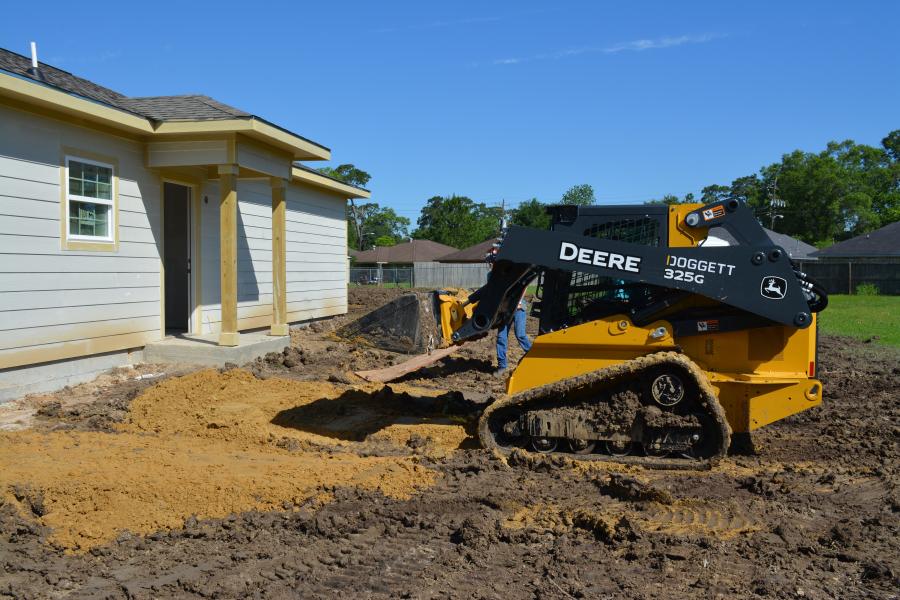 Doggett donated the use of a John Deere 325G track loader for Habitat for Humanity's use in the neighborhood they are developing.

"When the storm hit, we worked with John Deere to determine if there was anything we could do to help. At the time there wasn't a whole lot that could be done. We had the equipment here, but there wasn't a need yet for resources. We continued to work together with John Deere to find a way to help, long after much of the public attention to the storms and their impact had faded," he said. "This has been a team effort all along with John Deere that has allowed us to do something for those devastated by the storm."

Nathan Clark, associate director of corporate citizenship of John Deere and vice president of the John Deere Foundation, said that John Deere has been a supporter of Habitat for decades but partnering with one of John Deere's dealers is what made the time spent in Beaumont stand out.

"We saw this as a special opportunity for us to partner with a dealer to show our joint commitment to a community affected by Hurricane Harvey. The thing that makes this special is that volunteerism is the lifeblood of the work. Financial investment is one thing, but it is another thing to take the time to come together and bring that commitment to life with a little sweat. This was a very unique opportunity," he said.

John Deere has made a $1 million dollar commitment to Habitat for Humanity to assist with those most affected by hurricanes of the last three years, according to Clark. 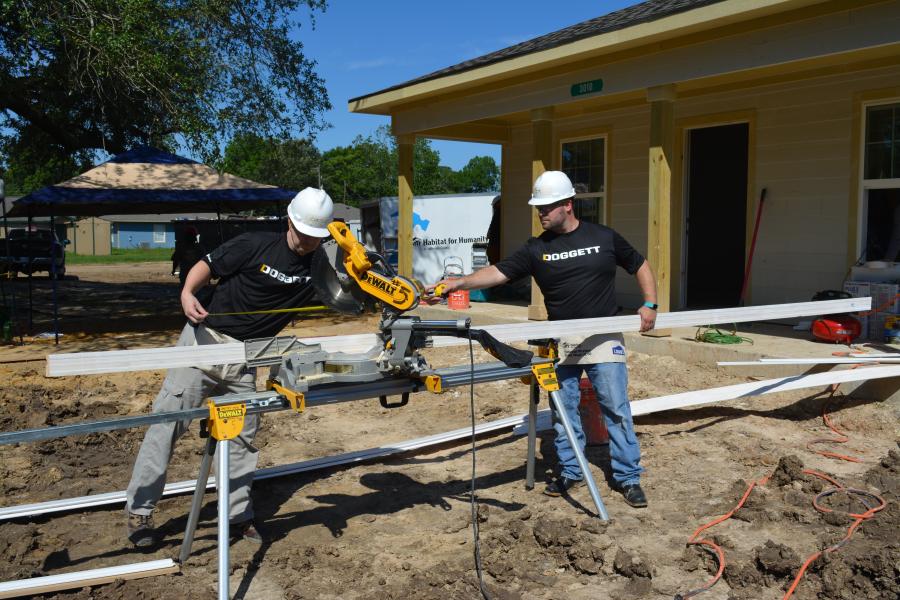 Chris Holden (L) of John Deere and Tim Holmes of Doggett cut interior trim for the house which will become home to a single mom and her three daughters who were affected by Hurricane Harvey.

"We're fortunate to have Doggett and John Deere out here helping along with their equipment. Our area is basically a swamp, and building codes say we have to build homes 12 feet above the road. There is going to be a lot of dirt work to be done before we can lay the slabs for additional homes. When they told us we could have use of this equipment, you saw nothing but clapping and dancing around here," she said.

Ortiz feels like his company has a unique responsibility to the coastal region of Texas and is fortunate to be in a position to help.

"With our footprint in the eastern third of Texas and the state of Louisiana, there were a lot of markets where we do business that were drastically impacted by Hurricane Harvey. From where it made landfall in Corpus through the coastal area up into Louisiana. Not only were communities and our customers affected by the hurricane, but so were many of our employees. Some lost homes, other had damage from the wind and water," he said.

"I hope we can continue to do this type of volunteer work. Our employees from throughout our organization were glad to lend a hand." CEG