Ritchie Bros. Auctioneers is bidding to remain the world’s largest industrial auctioneer and become the best-managed one as well. 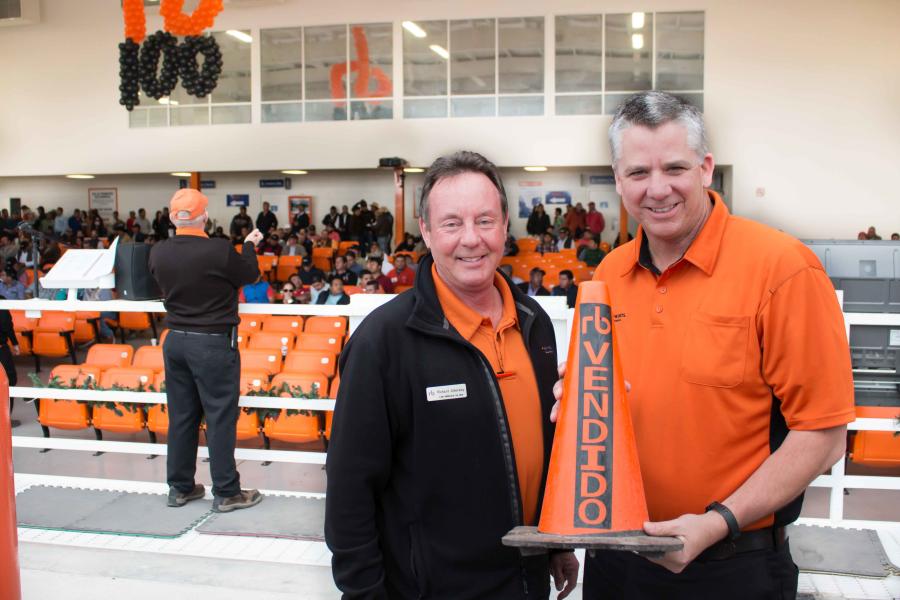 In a photo taken at Ritchie Bros.’s auction site in Polotitlan, Mexico, are Terry Dolan (R) and Richard Aldersley, vice president of sales. In May 2015, Dolan was named president of the U.S. and Latin America division of the company.

Ritchie Bros. Auctioneers is bidding to remain the world's largest industrial auctioneer and become the best-managed one as well. To that end, the company's board of directors welcomed a new chief executive officer in July 2014, Ravi Saligram. As part of Saligram's reorganization of the executive team, he brought aboard Terry Dolan in May 2015, as president of the U.S. and Latin America division of the company.

“I always had a ton of respect for Ritchie,” Dolan said. “I was confident about how our equipment sales would be handled. I loved the company's integrity. Since I have been here, I have come to know the passion of the people in this organization for customer satisfaction. Whether someone is selling his 100th piece of equipment at one of our auctions, or selling his 500th piece of equipment or buying his first one, our focus always is on the customer.”

Ritchie Bros. customers were numerous in 2015. With the last of the year's unreserved auctions in the books Dec. 18 — in Los Angeles and Kansas City — Ritchie rolled out year-end statistics, including the following numbers for what the company calls its “average industrial auction:”

• 200 consignors of equipment to be sold

In addition, Ritchie Bros. Financial Services delivered a most-ever amount of financing for equipment buyers at its auctions — $220 million — with total gross auction proceeds for the year reaching a record $4.25 billion through 345 unreserved auctions and its online equipment market Web site.

Following is the rest of the interview with Dolan:

CEG: When you were hired, Ravi Saligram cited your leadership and U.S. market experience as great assets. How do you see Ritchie Bros. benefiting from your being a member of the executive team?

Dolan: I have a strong working knowledge of the U.S. and Latin America region, having worked in this construction and industry space for upwards of 25 years. I have years of global sales and marketing experience, and have worked in a lot of different areas of the equipment industry, including with dealers and manufacturers.

CEG: Is there a makeover of some kind occurring at Ritchie, a significant change in how the company will operate in the U.S. and Latin American markets?

Dolan: Ravi Saligram has put a lot of changes in place already. Ritchie Bros. has gone to more of a regional focus, which gets us a lot closer to markets, to the buyers. It lets us be more agile in responding to the market. Those are some big things. We also want to expand our offerings beyond unreserved auctions. We are known as the world's largest auction company, but we want to branch out into other areas. For example, we want to expand our presence in the private sales market through our EquipmentOne secure online marketplace. We want to do more to support our customers through our equipment refurbishing service centers, where machinery can be refurbished, repaired and repainted.

CEG: In 2015, Ritchie Bros. had $1.9 billion in equipment sales to online buyers in auctions and EquipmentOne transactions. That was a 6 percent increase over 2014 and the most-ever annual online sales for the company. EquipmentOne sales were up 9 percent from a year ago. Will online sales continue to be an expanding segment?

Dolan: Online auctions will continue to be a growing aspect of our business, certainly, and sales through the EquipmentOne online marketplace is another choice — putting a piece of machinery up for auction in a controlled, online sales process for up to 14 days with the option of placing a reserve price. EquipmentOne has been around as a company for more than 10 years, and as a part of Ritchie for two years and it gives sellers another format to reach more people and control the timing, location and price of a sale.

CEG: What is the biggest challenge facing Ritchie Bros. in the next few years—competing auction houses, the economy, or what?

Dolan: Availability of used equipment in general is a challenge. But we also have the challenge of meeting customers' demands for more and more information about the pieces of equipment they are buying. Customers have stronger demands today than they used to have, so we continue to scale up our ability to provide that information.

CEG: Does the increasing reliance by contractors on rental equipment have any impact on the equipment auction business?

Dolan: Contractors are going to continue to rent equipment products. The increasing rental presence in the construction industry is an indication of the value to contractors of renting. But rental companies use auctions to move and sell their equipment when they change their inventory. Furthermore, contractors still are buying products for their use in six-month or 12-month jobs. It is largely still a buying-and-selling market.

CEG: Have the recession and slow-motion recovery of recent years been hurtful to the auction business or have auction companies such as Ritchie benefited from the slower economy and reluctance of contractors to buy new equipment?

Dolan: It probably is a little of both. We probably did benefit in some respects from the downturn, but it depends on the equipment. Right now, oilfield equipment is in flux. Construction, on the other hand, is picking up and customers are holding onto construction equipment a little bit longer. Our business is kept busy whether an economy is shrinking or growing.

CEG: A recent look at the Ritchie Bros. Web site showed almost twice as many agricultural machines for sale than construction machines — though the latter included 315 excavators, 200 compactors, 196 loaders and 103 skid steers, to mention a few. Yet $797 million of Ritchie Bros. sales in 2015 were from transactions involving transportation assets like trucks compared to $414 million from agricultural equipment. Just what type of equipment does account for most auction dollars?

Dolan: More items will be added to our Web site daily as we get closer to our auctions in February, but the biggest piece of the auction market is construction equipment, for sure. However, transportation is one of the fastest-growing segments; there has been a huge growth in truck sales, both over-the-road and vocational. The type of equipment being sold in volume is very much dependent upon regions. In the Midwest, there has been more growth in agricultural equipment. We've had a large presence in agriculture in Canada for years, but there was a significant growth in agricultural equipment sales in the U.S. in 2015.

CEG: You are president of Ritchie business in the U.S. and Latin America. Which market is bigger?

Dolan: Today the U.S. market is the larger one, as it is in general for industrial equipment. Of Ritchie's record $4.25 billion in sales in 2015, $2.1 billion of it was in the U.S. However, we have a growing presence in Latin America.

CEG: What separates Ritchie Bros. from its competitors? What edge does Ritchie have among auctioneer companies?

Dolan: One of the biggest things we offer is the always-unreserved live auction. When people come to one of our auctions, they know the market will determine the price of equipment that day and that it will sell that day. They also know that every transaction is free of risk. For sellers of equipment, we bring the largest audience of buyers in the world. Not only do we attract buyers from the immediate region, we will have tens of thousands of buyers from around the globe.

If they come to our five-day auction in Orlando, Fla., Feb. 15-19, they will see the largest auction in the world. Last February in Florida, we sold $179 million in equipment and attracted some 9,000 bidders. This year, we again expect to see thousands of buyers from around the globe. At our auctions, we absolutely offer to customers the largest seller and buyer base of any auctioneer company.

CEG: Ravi Saligram, Ritchie's CEO, has called 2015 “a transformational year for Ritchie Bros.” Do you see 2016 being more of the same?

Dolan: We think there will be very strong business activity in 2016.