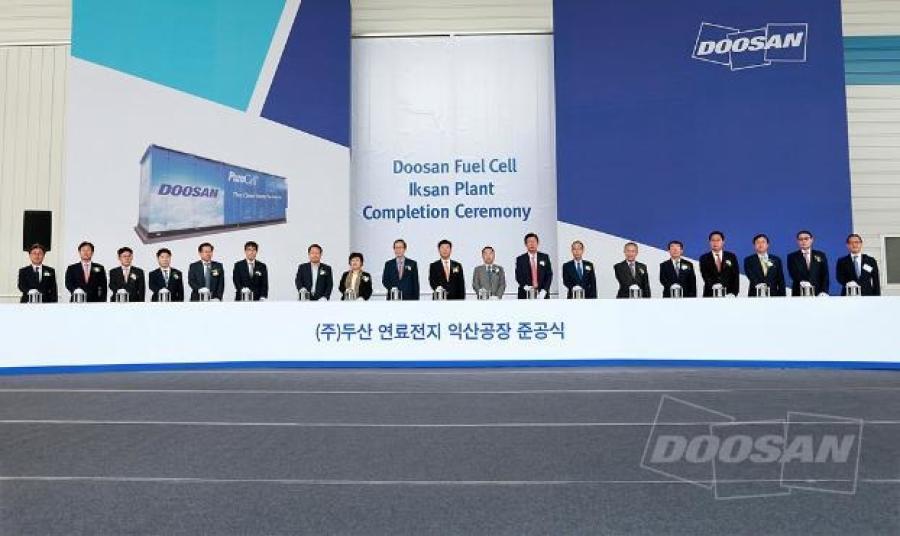 On May 23, Doosan Corporation celebrated the completion of the construction of its new 10,744-square-meter fuel cell production facility at the second General Industrial Complex, Iksan-si, North Jeolla Province. The company invested about 40 billion won ($36 million) in building the facility. A fuel cell is an electrochemical device that converts hydrogen and oxygen into electricity and heat through a chemical reaction. Fuel cells are regarded as environmentally-friendly devices with high energy density resulting from their compact size, and high capacity utilization rates.

The Iksan Factory is capable of producing 144 units of 440-kilowatt fuel cells per year, which adds up to an annual production capacity of 63 megawatts, the highest in Korea. Combined with its fuel cell factory in the U.S. state of Connecticut, the company will be able to respond more promptly to global demand.

By adopting an automated production system for stacks*, an essential fuel cell component, the Iksan Factory has drastically improved product quality and production capacity. Furthermore, the domestic production has allowed the company to achieve balance of plant**, and improve its cost competitiveness.

*A stack refers to the assembly of individual cells, the smallest units that are capable of generating electrical energy from chemical reactions.

**Balance of plant (BOP) refers to the ancillary equipment that helps supply the fuel and water required for the fuel cell reaction.

The company has also established a stable supply and demand system by producing electrodes, another main fuel cell component that induces a catalyzed reaction of hydrogen and oxygen, in-house. Previously, the company depended on overseas suppliers to obtain electrodes.

By concentrating its continuous R&D efforts on the development of clean technology, the company plans to launch the production of fuel cells that use by-product hydrogen*** fuel and supply them to the Daesan Petrochemical Complex in South Chungcheong Province.

***By-product hydrogen refers to hydrogen generated as a by-product from refinery processes.

Hyunsoo Dong, president of Doosan Corporation, said: “With the completion of the construction of the Iksan Factory, we are in a better position to contribute to the growth of the renewable energy business and create jobs in Korea. By partnering with more than 80 domestic suppliers, the company also expects to benefit from the cost reduction and enhanced product competitiveness. Based on our experience and technology built in Korea, we plan to further expand to Europe, the Middle East and other new markets.”