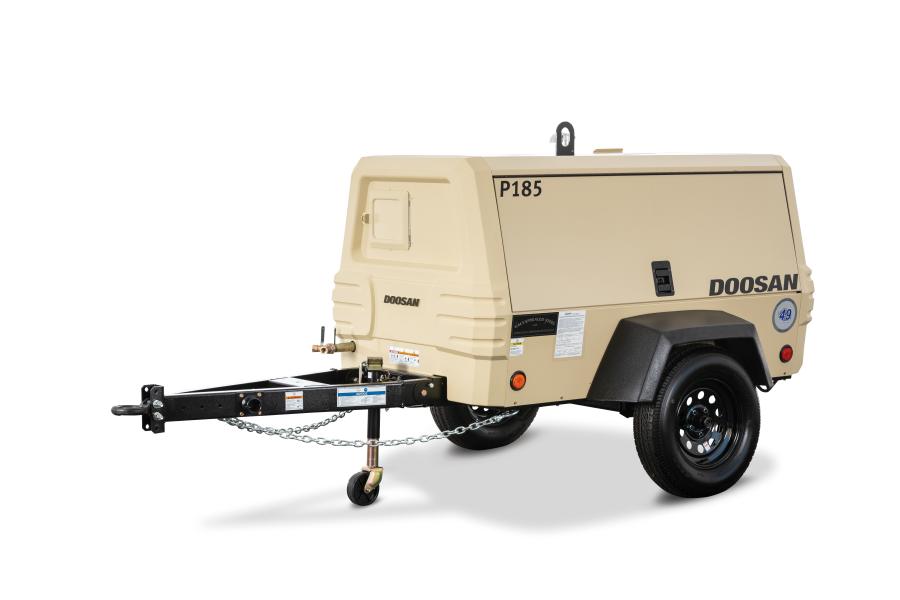 The P185 is equipped with a Tier IV Final Doosan D24 engine and a Doosan DSN100 airend. Together, they deliver 185 cfm of air at a rated operating pressure of 100 psi.

Doosan Portable Power has released a newly updated Doosan P185WDO portable air compressor featuring increased runtime and a proprietary Doosan airend as well as a Doosan engine. Doosan is the only air compressor manufacturer to use both proprietary engines and airends in its products, according to the manufacturer.

"By manufacturing both its own engines and airends, Doosan can make sure its air compressors meet high and consistent standards," said Jeremy Bailey, Doosan Portable Power air products manager. "Customers can trust that the two major components of a Doosan air compressor are of Doosan quality."

The P185 is equipped with a Tier IV Final Doosan D24 engine and a Doosan DSN100 airend. Together, they deliver 185 cfm of air at a rated operating pressure of 100 psi. The unit runs 12 hours at 100 percent load, which is two hours longer than the previous P185 generation model. The P185 achieves longer runtime because of its 34.5-gal. fuel tank.

The high-performance Doosan engine provides the P185 with reliable power and improved cold starting capabilityin temperatures as low as -10F, which is 20 degrees colder than its closest competitor, according to the manufacturer.

Bringing both the engines and airends in-house in the new P185 also has simplified machine maintenance. The P185 has new, convenient curbside discharge valves and safer clean-out ports, with best-in-class cooler access. All filters are readily accessible and clearly marked, and the separated oil tank has a new fill and sight gauge. Diagnostic connections also are easier to reach while an LED backlit control display allows gauges to be read in almost any working condition.

For storage, the P185 has a long, deep toolbox. The compact footprint provides easy towing and maneuverability while the galvanneal-steel enclosure withstands harsh jobsite conditions and resists rust and corrosion.

The performance of the P185 is bolstered by multiple warranties, including a 1-year/2,000-hour bumper-to-bumper warranty; a 2-year/4,000-hour airend warranty; and a 5-year/10,000-hour Doosan extended warranty.