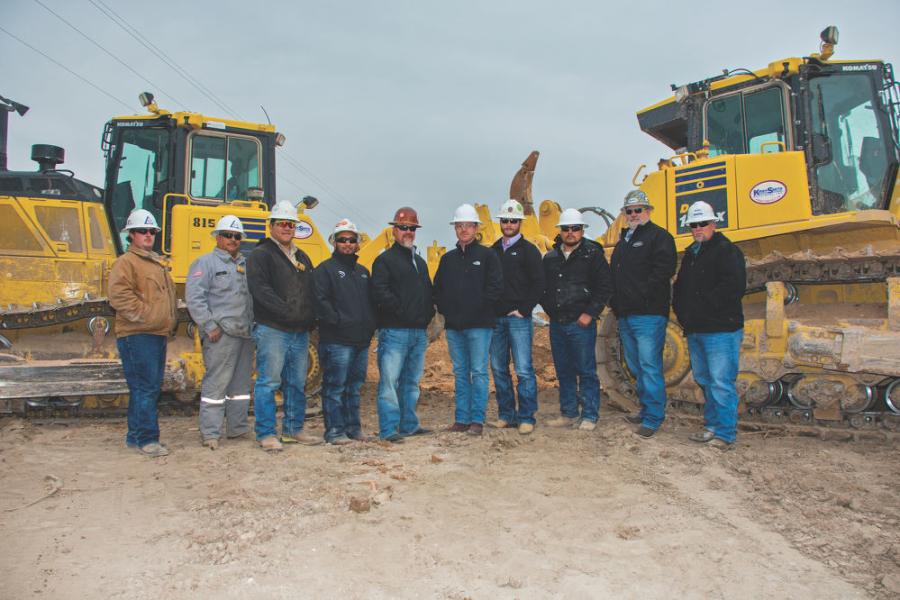 In their younger years, Casey Poynor and Clay Butler started several of what they describe as "tiny" businesses. In its earliest form, that was the idea for Dorado Construction Group as well, but through the past eight years, the landscape has changed dramatically.

"In November 2011, Clay and I were visiting with my uncle, who told us we should look into building secondary containment solutions around tank batteries and saltwater disposal units for oilfield companies," Casey recalled. "After some research, we decided it could be a very favorable venture and began writing a business plan." 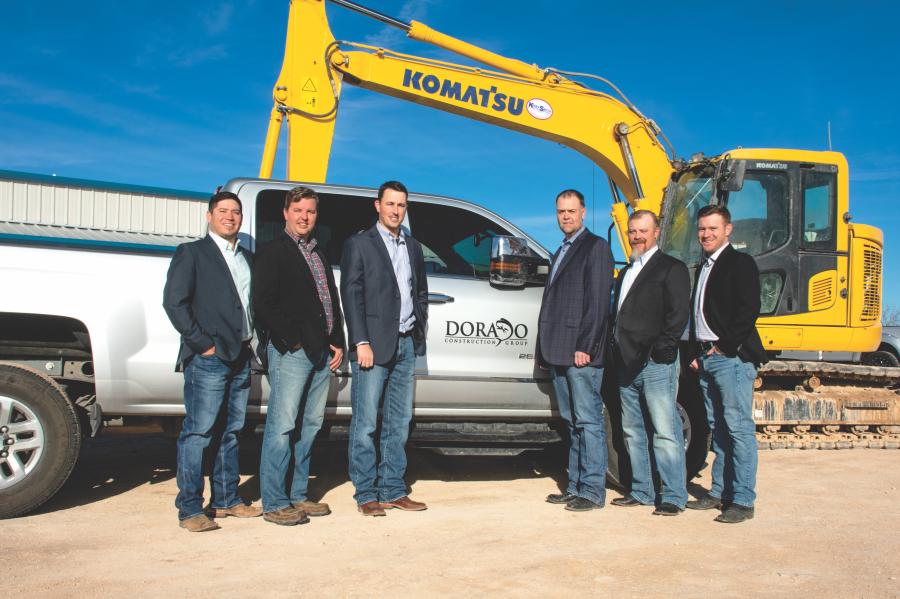 They recruited their stepbrother, Shawn Poynor, to join them as director of business development. Casey and Clay have since become general manager and fleet manager/equipment manager, respectively. Today, the ownership group of the San Angelo, Tex., enterprise also includes Account Managers Rocky Robles and Blake Leggett as well as Finance Manager Bryce Leggett.

This group oversees a firm that is vastly different than its humble beginnings. Dorado Construction Group — originally BP Surface Solutions — now has five divisions, which primarily serve oilfield customers in Texas, Oklahoma and New Mexico. One of those divisions is dedicated to building secondary containments. The others include civil construction, rock crushing, roustabout and mechanical resources; plus general contracting, which offers design-build services for oilfield and commercial entities.

"We want to reach a point where we are a one-stop shop for oilfield companies," said Clay. "Other than instrumentation and electrical work, we pretty well have it covered. Our growth has really been fueled by taking care of customers. They saw that we did a good job and met their deadlines. Now, repeat business is a significant portion of our overall project list."

At the end of 2011, Casey, Clay and Shawn met with a potential investor, who advised them to take their business plan to a financial institution.

"He was interested and confident that a bank would finance us," recalled Casey. "On the way home, we stopped at a gas station where Clay bumped into an acquaintance who asked if we could do a job for him at a certain price. It was a no-brainer. Within a month, we had a master service agreement, insurance and a spray rig, and we never looked back."

That project started in February 2012. Approximately two years down the road, they'd added three more rigs and were building multiple secondary containment systems simultaneously. Little did they know at the time, another big opportunity was just around the corner.

In late 2014, a civil contractor, who had employed Casey and Clay, approached them about buying out his business. He was ready to retire and had a small staff, who handled earthwork for oilfield firms.

"That put our toe in the water in terms of dirt work," Clay said. "Roughly three years later, we fully dove in with the acquisition of a second civil contractor, who had about 40 people on the payroll. This move really expanded our capabilities into building lease roads, oilfield locations and facility sites. The contractor also did rock crushing, and we kept that aspect of the business as well."

Dorado Construction currently runs four crushing sites. With mobile equipment it can crush at an oilfield or, as in most cases, at a quarry location of the customer's choosing.

"We have our own drills, so we make blast holes. Once a shoot is done, we turn the rubble into usable product," said Casey. "Customers either pick it up, or we will deliver with our trucks." 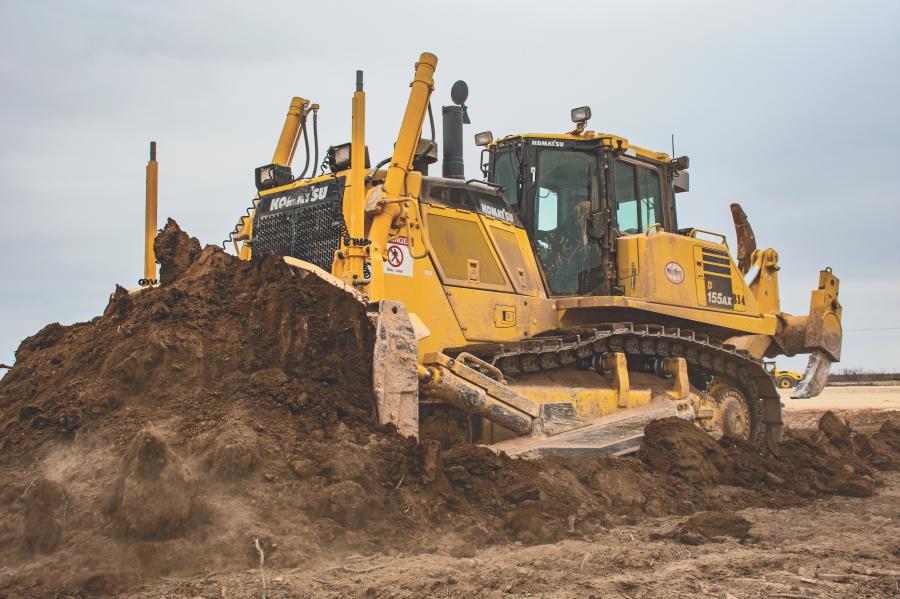 "We heard a lot of good things about Komatsu, so we contacted Ron to set up a demo on a D155," said Casey. "From our standpoint, the D155 is the most efficient machine for building drilling pads, where we are moving 6,000 to 8,000 yards of heavy materials. That often involves pushing them uphill as we construct ponds. We also encounter rock quite often, and the dozers are great for ripping. The D155s power through every situation without issue."

Impressed with the performance of the machines, Kirby-Smith's backing and Komatsu Financial, Dorado purchased the D155AX-8 and added a D85EX-18 dozer, PC138USLC-11 and PC290LC-11 excavators, in addition to WA380-8 and WA500-8 wheel loaders.

The wheel loaders are part of crushing operations for digging into blasted soils and material banks and then loading into crushers, as well as moving finished products onto trucks. Dorado Construction Group uses the D85s for general pushing, shaping and grading. Crews put the Komatsu excavators to work digging in lighter materials. 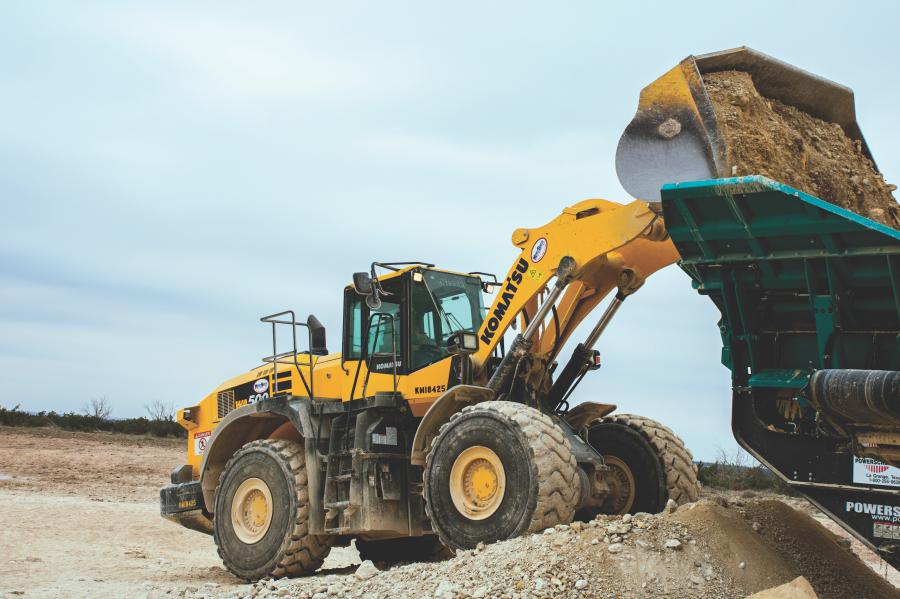 Operator Alfonso Mendoza charges a crusher with a 353-hp Komatsu WA500-8 at a quarry site near San Angelo, Tex.

"The increases in productivity and efficiency we get across the board with Komatsu are fantastic," stated Clay. "I see them every day when I look up the machines through KOMTRAX on my desktop computer or tablet. If a code pops up, it alerts us so that we can address it quickly. I contact Kirby-Smith, and we walk through the issue to decide whether the operator can fix it, if it's something we can take care of with one of our mechanics or if we need a Kirby tech to come out."

Because all the Tier IV Final units are covered by Komatsu CARE, Kirby-Smith technicians perform scheduled services for the first 2,000 hours or three years. That has freed up Dorado's mechanics to take care of other tasks and reduces overall owning and operating costs.

"Any savings is significant," Casey pointed out. "A benefit of going through Komatsu Financial for purchases was getting zero percent interest or a much lower rate compared to a bank, depending on the machine. It adds up to much less interest and better cash flow."

The closest Kirby-Smith Machinery branch to a Dorado Construction Group project takes care of service and needed parts, including ground-engaging tools. "We can call any of them and know they will respond quickly," said Clay. "Ron has been great about ensuring that we have the right equipment to meet our needs, and our product support representative Cody Christopher makes sure we have the proper cutting edges and teeth. We view those guys and Kirby-Smith as partners in our success."

Employees Are ‘Best in the Business'

Dorado Construction Group has the means to branch out beyond the oilfields. It is licensed for Texas Department of Transportation projects and has already completed a few small jobs.

"Further governmental work is a consideration, and we think commercial sites are more likely going forward," said Casey. "We can do anything from an earthwork standpoint, and we have staff members experienced in asphalt-related paving."

That may mean reassigning some of the nearly 100 employees who are currently divided among approximately 20 Dorado Construction Group crews.

"Our staff is the best in the business," stated Casey. "We sincerely believe that. Their hard work and dedication are responsible for where Dorado Construction Group is today. We appreciate everything they do on a daily basis and know that they will be key to our future success."

This article originally appeared in the KirbySmith Connection Magazine which is produced by Construction Publications, Inc.