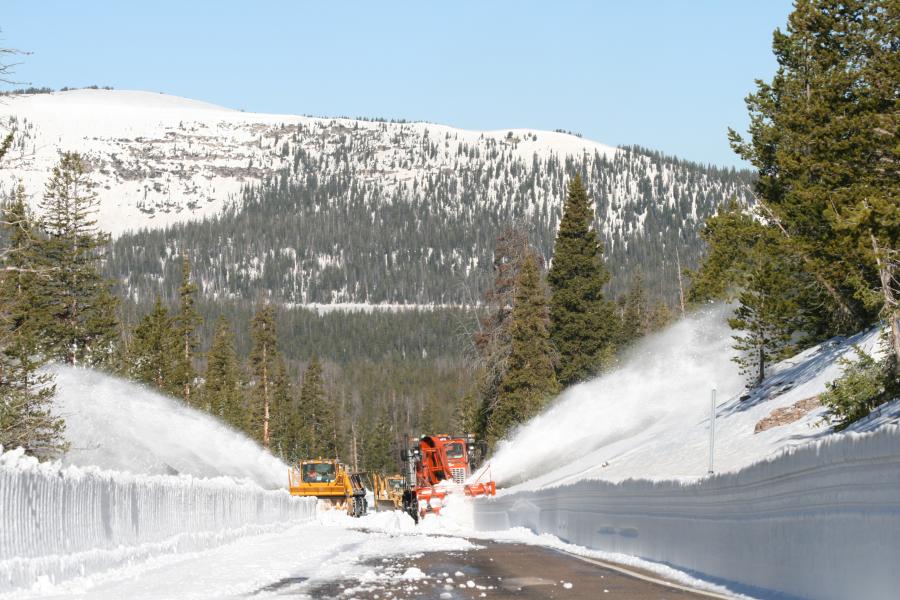 The Wasatch Range is a rugged area that regularly gets pounded by winter storms — producing more than 500 in. per year in some places. (UDOT photo)

The job of getting heavy snow off the roads and freeways of western mountain states is an expensive, but essential process.

While many operators of snowplows, spreaders, blowers and other equipment work seasonally, for the professionals in charge of maintaining that equipment, it's a year-round job.

That is particularly true in places like the Sierra Nevada Range in California and Utah's Wasatch Range, where snowfalls are sometimes measured in double-digit feet, rather than inches.

In the warmer months, maintenance experts work to get their snow-removal machines back to the fit-and-fiddle shape they were before winter. That's also the time to shop for new and replacement equipment, before leaving time to get them properly dressed for the upcoming snow season.

"We never stop preparing for the next season," confirmed Greg DeAlba Jr., the Donner Pass Area superintendent for Caltrans in California's Sierra Nevada Range, an area known for notoriously high amounts of snow each winter. "At the close of each season every piece of our equipment is gone through, plows are taken off and seasonal bed changes are made. Our equipment shop works throughout the year on preparing equipment for the next season."

Both California and Utah have two things in common: massive snow totals in the high passes; and Interstate 80, an important route which passes through rugged mountain gaps in each state.

There are many reasons to keep I-80 open — no matter the conditions. The road is important for truckers moving freight to all points between San Francisco and New York. In addition, the freeway also brings Golden State snow-sport enthusiasts to the popular resort areas around Lake Tahoe. 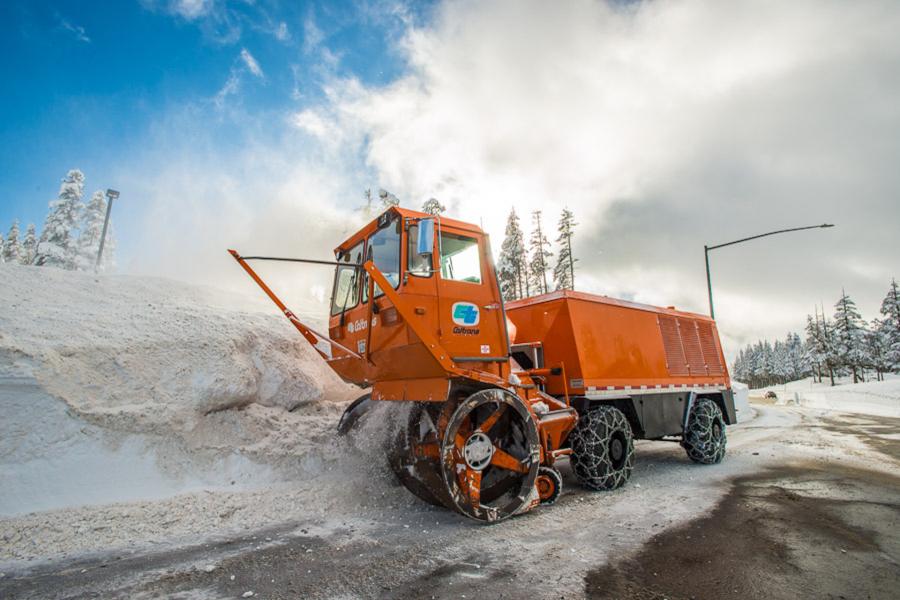 Caltrans' job is to keep traffic moving safely on an interstate built to cross the Sierra crest at the Donner Summit, two miles north of the pass itself, at an elevation of 7,240 ft.

"We have 24-hour support from our equipment shop with mechanics stationed at our four Donner Pass area facilities," DeAlba said. "Seasonal employees and valley crews also are sent up to assist and provide us with the bodies we need to run the large number of equipment it takes to maintain this stretch of interstate highway."

It's a good thing too, because the Donner Pass is noted for being one of the snowiest and windiest places in the lower 48 states with an average of 411 in. of frozen precipitation per year.

To battle often-whiteout conditions along I-80 in the high Sierras, DeAlba and his people employ a variety of equipment to keep the roadway clear. They primarily rely on a tandem of two snowplow attachments and one sander for each dump-truck chassis. Other equipment in the fleet includes loaders, motorgraders, rotary blowers, pusher trucks, pickup trucks and a 16-ton wrecker.

"Our operation will change with every storm," he explained. "Lighter snowfalls will require less of the specialty equipment, like blowers and graders, but everything will be ready to go should the need arise. Our heavy trucks typically are outfitted with either a sander or dump-style bed. Recently, we added some Henderson spreader beds with brine application capabilities."

The operation also operates six trucks with campers for chain-control and truck-screen operation, and most pickups are outfitted with push bumpers to assist vehicles over the summit.

Utah Bullies Aside a Lot of Snow, Too

About 550 mi. to the east of Donner Pass along I-80 is Salt Lake City and the beautiful Wasatch Range, part of the western Rockies. Although the Wasatch peaks are not quite as high as the tallest mountains in the Sierra Nevada range, don't for a minute think the Utah mountains run short of heavy snow, too. 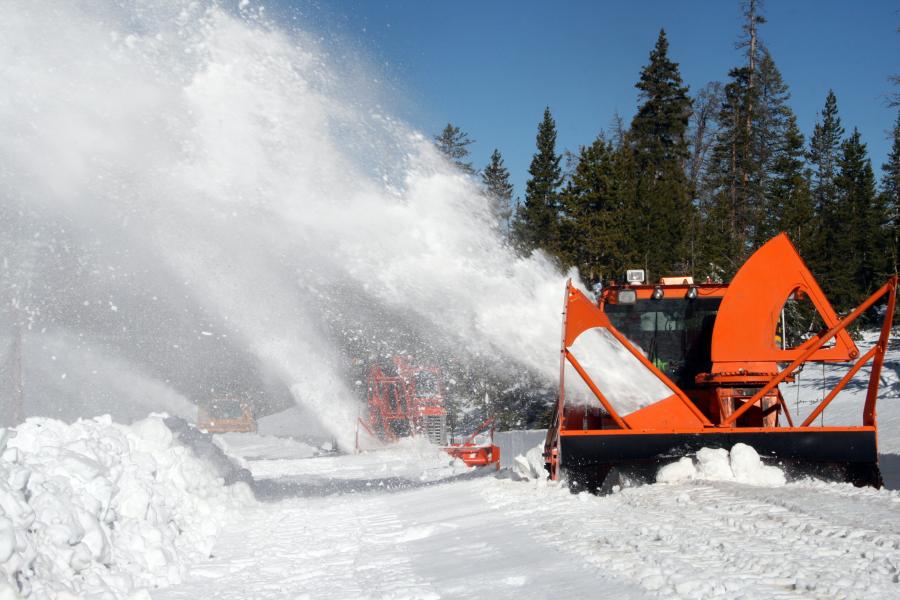 In fact, the Wasatch Range is a rugged area that regularly gets pounded by winter storms — producing more than 500 in. per year in some places.

But, as in California, Utah snow-sport lovers, and truckers that drive I-80 through the Wasatch Range, must be able to rely on experts doing the grunt work of clearing the roadway.

On the eastern outskirts of Salt Lake City, I-80 winds through Parley's Canyon and toward the self-same-named Summit at 7,120 ft. Here the interstate is the highest point for the roadway in Utah — one that is regularly buried by deep snow each season. 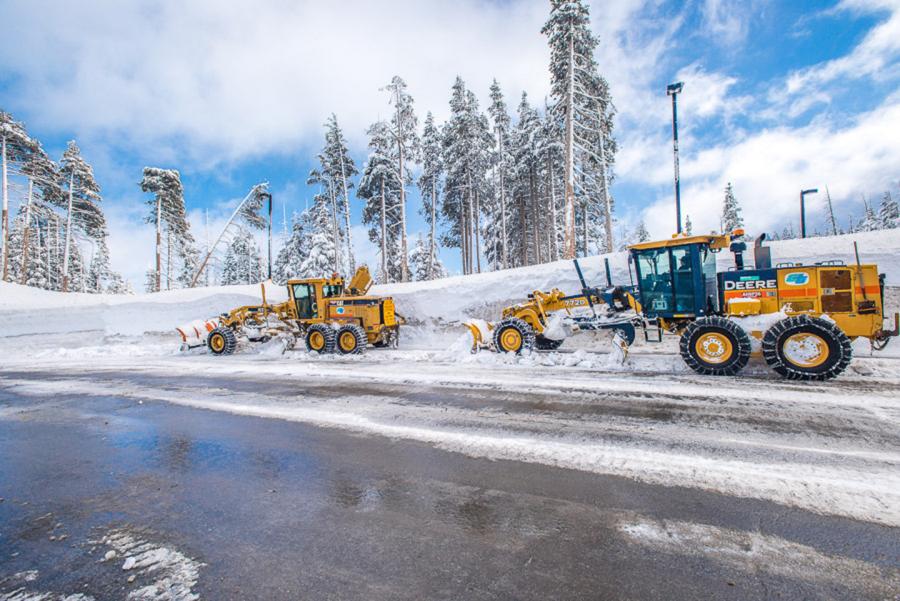 "Last year was a pretty heavy winter for us," explained Daniel Page, UDOT's director of Maintenance, Asset & Facility Management. "Between Parley's, Little Cottonwood and Big Cottonwood canyons [all near Salt Lake City] is our most concentrated area for snowfall. It's not uncommon in Parley's Canyon and the other areas to see three- to four-inches an hour for a considerable amount of time."

UDOT prefers to employ the echelon plowing method on many freeways, where several dump-truck snowplows move along the road in a staggered formation. Page described the practice as being much faster than what can be accomplished in one pass by a single snowplow. UDOT promotes echelon plowing because it clears the major routes quickly and efficiently, he said.

The combination of deep snow and steep grades can cause problems with a plow operation, but for those trucks designated to work in the higher elevations, UDOT mechanics boost their horsepower and outfit them with higher torque range, Page explained.

In the UDOT yard at Kamas, due east of Salt Lake City, the agency has big, loader-mounted snow blowers, imperative for moving snow off the area's mountain roads. Page said these machines are Kodiak models that "are big, turbo-charged, jet-fired vehicles that our guys use to throw around a serious amount of snow."

"Usually, we take them up into our mountain passes that are closed seasonally. Then, as spring and summer approaches, we use them again to clear the rest of the snow and in some cases lately, we bring them down from the canyons to help us clear the snow packed against the sides of barriers. 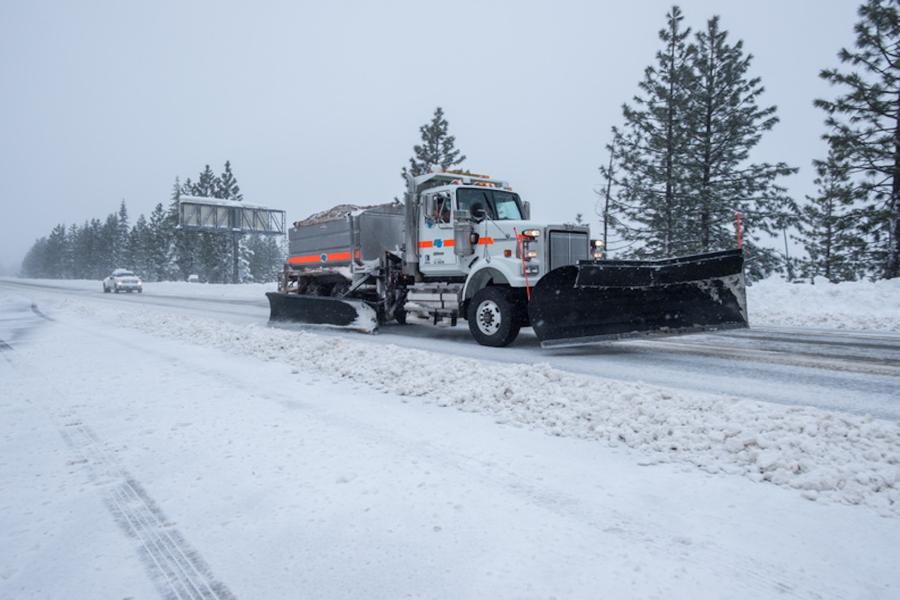 As an example of the performance of these snow blowers, on the scenic Mirror Lake Highway (SR 150) is a pass that saw a 23-ft. snow accumulation last winter. Page said UDOT's pros used the blowers to clear the road with little trouble.

And, UDOT also has begun using infrasonic avalanche detection systems to keep highways safe from snow slides. The systems include a series of percussion instruments known as "exploders" that ignite an oxygen-propane mixture to generate a blast strong enough to trigger a controlled avalanche. They are detonated from long metal towers atop mountains prone to slides. After the avalanche has stopped and it's considered safe to proceed, Page said, UDOT crews move in to clean the snow off the highway and reopen the route.

With new wintry weather fronts coming through California and Utah on a weekly basis, each state's DOT is staffed by some of the world's leading experts in heavy-snow removal. That means they know the right equipment tough enough to withstand the daily bitter conditions in the high mountain passes. CEG