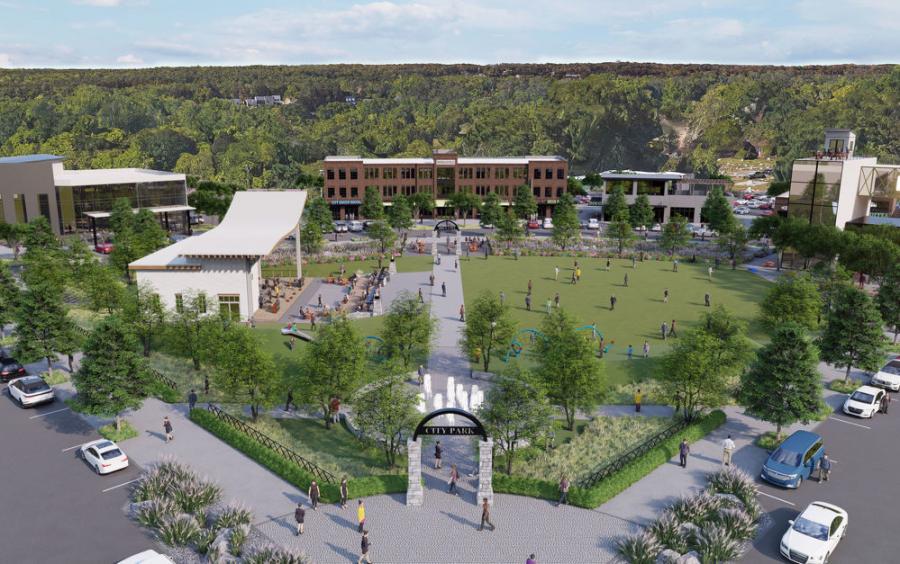 A central plaza is home to a small performance venue and fountain that serves as the backdrop for festivals and events like Douglasville’s annual Christmas tree lighting.

Just 20 miles west of Atlanta, Ga., the city of Douglasville has created a 10-year downtown master plan to revitalize the growing community's center. The city of Douglasville, along with the city's Downtown Development Authority, Main Street Douglasville and the Douglas County Development Authority, challenged the project team comprised of TSW, Bleakly Advisory Group and Croy Engineering with creating a plan for the downtown district.

Patrice Williams, project manager and director of community development for the city, says Atlanta-based architectural firm TSW was retained not only to create a plan, but also to further catalyze development of the downtown district while addressing challenges such as the Georgia Department of Transportation's plan to reconfigure West Broad Street – which will remove 90 public parking spaces – the relocation of Highway 92, the eventual sale and redevelopment of the former county jail and a lack of nightlife and daytime attractions. If fully implemented, the plan would add nearly 1 million square feet of new development, according to Williams.

In response to the relocation of Highway 92, the Highway 92 Corridor Study established a plan for a multimodal transportation corridor with greenway and mixed-use activity along it. Dallas Highway and Fairburn Road will be transformed into complete streets, which will become part of downtown extending both north and east.

The study also calls for revitalized neighborhood areas that will increase the range of housing types and the amount of open space, developing pedestrian-scale blocks and incorporating a "complete street" approach for new streets and streets under redesign. It was also deemed important to preserve historic districts and buildings and to incorporate art, monuments and memorials in public spaces, as well as to encourage the creation of pocket parks and gardens throughout the area.

As part of the planning process, Douglasville officials and TSW, the city's design contractor for Phase I of the Downtown Master Plan, sought input from the public regarding a variety of methods, including a Downtown Block Party booth and intercept survey, Visioning Workshop, Community Input Survey, Master Plan Committee Meetings and a Draft Plan Presentation. The collective goal is to attract the interests of developers, business owners, prospective residents and tourists to downtown Douglasville. If fully implemented, the plan would add nearly 1 million square feet of new development and recommended improvements. 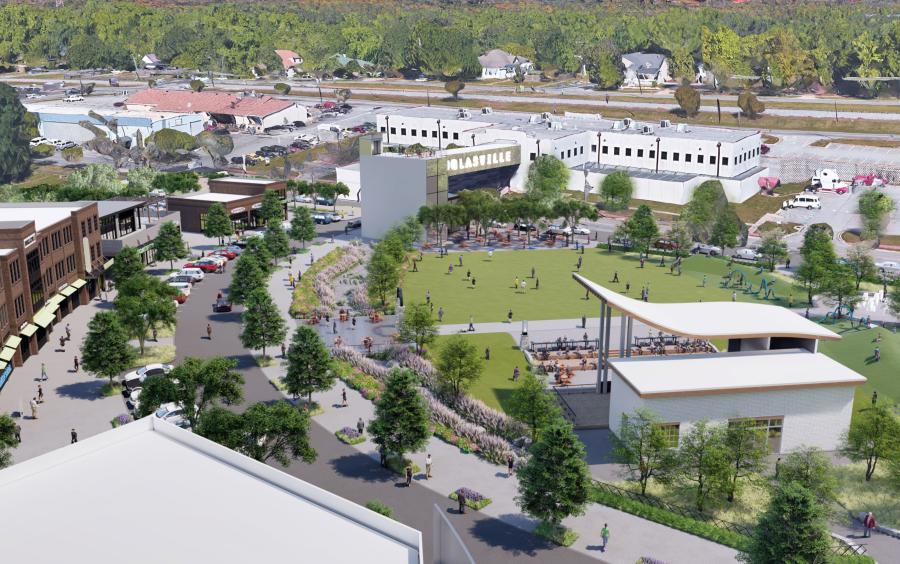 This new 10-year plan builds on another downtown renovation that was completed in 2008. The goal of this $40 million project includes fusing Douglasville's small-town atmosphere with a walkable urban space that radiates a metropolitan vibe. The objective is to enhance the business environment, stimulating growth while protecting nature preserves and greenspaces at the same time, promoting historic resources by repairing historic buildings and encouraging arts and culture through the construction of an art museum, concert hall, performing arts center and history museum. Additional goals involve adding loft apartments and transportation options to improve the quality of life and encourage people to live, work and visit the downtown area.

Also in the plans are the purchase of property for a future park and proposals for bicycle and pedestrian facilities. The concept is to retain open space and use natural resources that promote healthy lifestyles and reduce the impact of development.

While preserving nature and historic elements is important to the project, the driving force behind the plan was redevelopment, according to Williams. "The old county jail is located in the heart of our downtown," she explains. "In most recent years, the building has been used for filming. However, this was not the best use of the area." It will be demolished to make room for new structures and greenspaces outlined in the Master Plan. 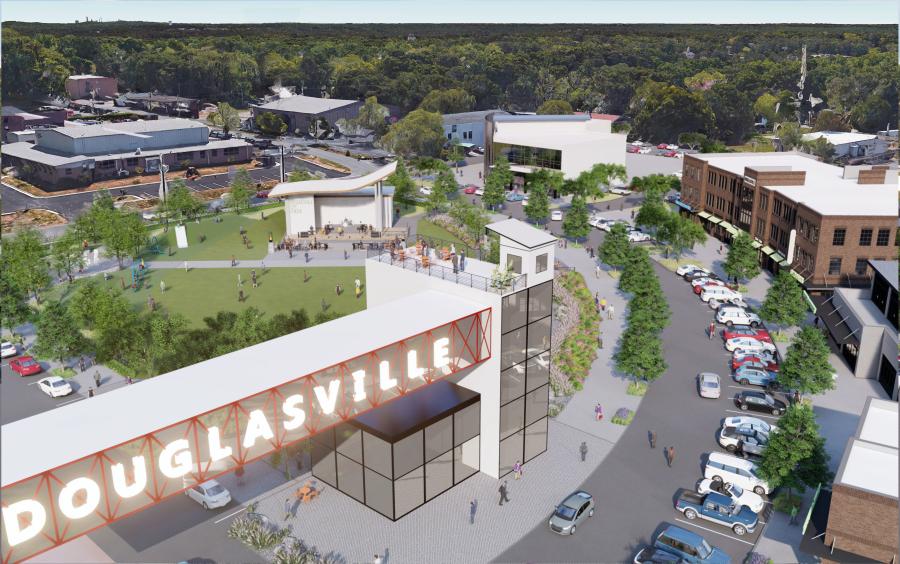 Once the prison structure is removed, downtown Douglasville will become a mixed-use area accessible to everyone that will feature diversity in both building design and usage. "We are looking to create a unique gathering space for residents and visitors that would allow both the public and private sector[s] to host events," Williams elaborates.

Populated by roughly 35,000 and divided by Interstate 20, the seat of Douglas County is known as a shopping destination between Atlanta and Birmingham, Ala. In fact, the central business district is listed on the National Register of Historic places as an historic district and is the epitome of a turn-of-the-twentieth-century southern railroad town. Many of the one- and two-story brick buildings that sit flush with the sidewalk date to the mid-19th century and feature Victorian design, although there's also Romanesque, Italianate and Queen Anne architecture as well, with Gothic doorways and windows.

A central plaza is home to a small performance venue and fountain that serves as the backdrop for festivals and events like the annual Christmas tree lighting. The downtown area is so quaint that it has been featured as the setting for several movies and TV shows. That's why it is so important to preserve the character of Douglasville during this makeover.

The recommended improvements are expected to cost around $40 million, Williams reports. "The plan takes into account current funding structures and other funding structures that can be easily taken advantage of by the city and its partners," she says.

Douglasville has already received approximately $8 million in funds from the Atlanta Regional Commission. In addition, Williams says the city has set aside money that includes SPLOST funds to build the amphitheater and greenspace. A SPLOST is a special-purpose local-option sales tax used as a financing method for funding capital outlay projects in Georgia. It is an optional one percent sales tax levied by any county for the purpose of funding the construction of parks, schools, roads and other public facilities.

Adding to that, Williams says Douglasville recently passed a TAD in hopes of providing an incentive for private development. A TAD, or TIF, is a financing incentive tool in which bonds are issued to pay for infrastructure and other improvements.

Douglasville officials hope to complete the entire project by 2027. Phase I – the Amphitheater and Greenspace – has a two-year schedule. With environmental studies for Phases 1 and 2 having been already completed, Williams says the city hopes to issue Request for Proposals before the end of June.

After the city's announcement that it had received approval to move forward with the demolition of the former Douglas County Jail site, Douglasville officials were presented with updates to Phase I of the Downtown Master Plan. TSW presented their new amphitheater and greenspace concepts based on their findings from community engagement meetings. 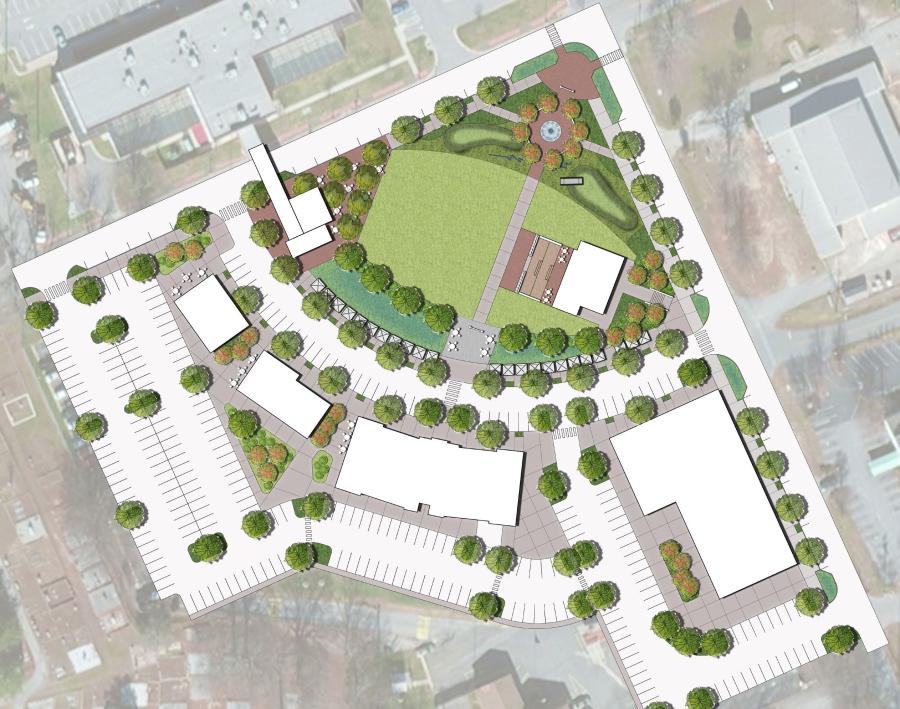 The new 3-D renderings depict a 360-degree view of the greenspace, amphitheater and mixed-use structures. The mixed-use structures will allow for retail, restaurant, office and residential spaces. The presentation ended with Adam Williamson, TSW's project manager, elaborating on a 24-month design and construction schedule. "We propose a project timeline that includes one year for the design phase and one year of construction that is contingent on the former County Jail demolition," Williamson said. "Once that is completed, we will most likely have to re-survey the site before further construction takes place."

City staff is currently drafting the Request for Proposal for the demolition of the former county jail site. Once RFPs have been accepted and approved, the next step is to demolish the old jail. Williams says routes to bypass the development will be created to avoid any major traffic concerns, but because few businesses are adjacent to the project area, she doesn't anticipate any issues.

This historic small town nestled between Atlanta and Birmingham could soon see a booming tourist business and a vibrant economy once the entirety of this ambitious downtown revitalization project is completed.

"We are elated to begin making progress on this phase of the Downtown Master Plan," Douglasville Mayor Rochelle Robinson said, "everyone is excited to see this planning effort become reality."