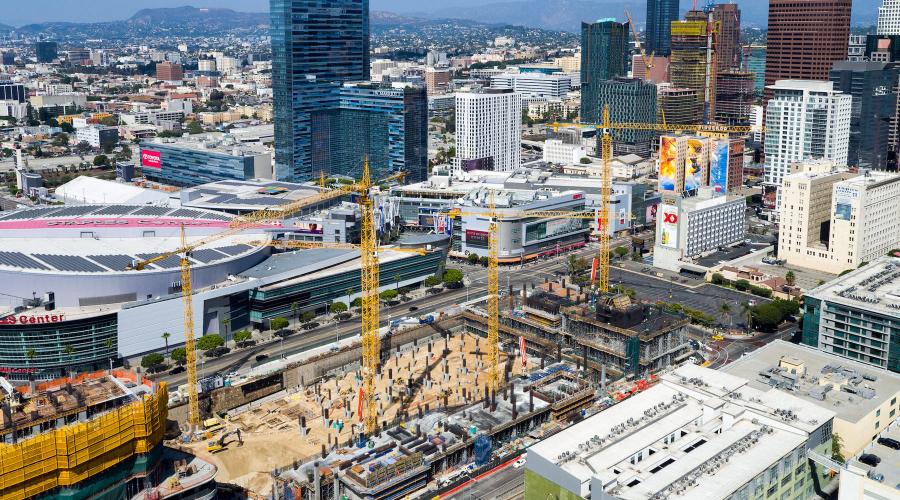 Giant cranes dominate the forefront of this aerial view of the city. (Hunter Kerhart)

In downtown Los Angeles, it's hard to walk more than a few blocks without having to wind around a construction zone.

And construction is making traffic even worse than usual, said 34-year-old Amy Robinson, an aspiring screenwriter.

“One time, I was on the bus and we waited like 20 minutes just to cross to the green light to go one block,” she said.

People on the bus started cursing out the driver.

“It was just a madhouse.”

“We are becoming a vibrant city center, which is befitting as the second-largest city in the country,” she said.

Schatz pointed to the Wilshire Grand Center, a gleaming $1.2 billion tower. The 73-story skyscraper, which includes hotel rooms and office space, will be the tallest building west of the Mississippi once it's finished later this year.

Since 2010, 115 new retail, housing, hotel and office projects have been built downtown, according to real estate data firm CoStar.

The revitalization started in the early 2000s after the city made it easier to convert blocks of old office buildings into apartments. Lots of new housing came onto the market. Then the financial crisis hit.

But when the economy began to recover, LA's downtown was ready.

“In a lot of places, you'll see new offices or new retail centers being built, and the housing will follow where the jobs and people are going,” said Steve Basham, a market analyst with CoStar.

But in Los Angeles, the housing came first.

“It became a cool place to live, and that has generated new office development and new retail development,” he explained.

Since 2000, about $30 billion has poured into downtown construction, which has led to more than 200,000 new jobs, according to Schatz.

Downtown LA has also been getting attention from foreign investors, said Michael Soto, researcher at the real estate firm Transwestern.

“Overseas investors and developers are really looking to place money here in the U.S., which is seen as a safe investment environment,” Soto explained.

Over the last five years, Chinese developers have sunk more than $4 billion into upscale apartments and hotels, according to Transwestern.

The average rent for a one-bedroom apartment is about $2,500.

But with so much construction happening so fast, the vacancy rate has climbed to about 9 percent — the highest in Los Angeles.

“That's the question with this all of this new building: Are there enough affluent renters to fill these spaces and, if not, what happens?” Basham asked.

It's a fair question considering more than 7,000 apartments are under construction right now.