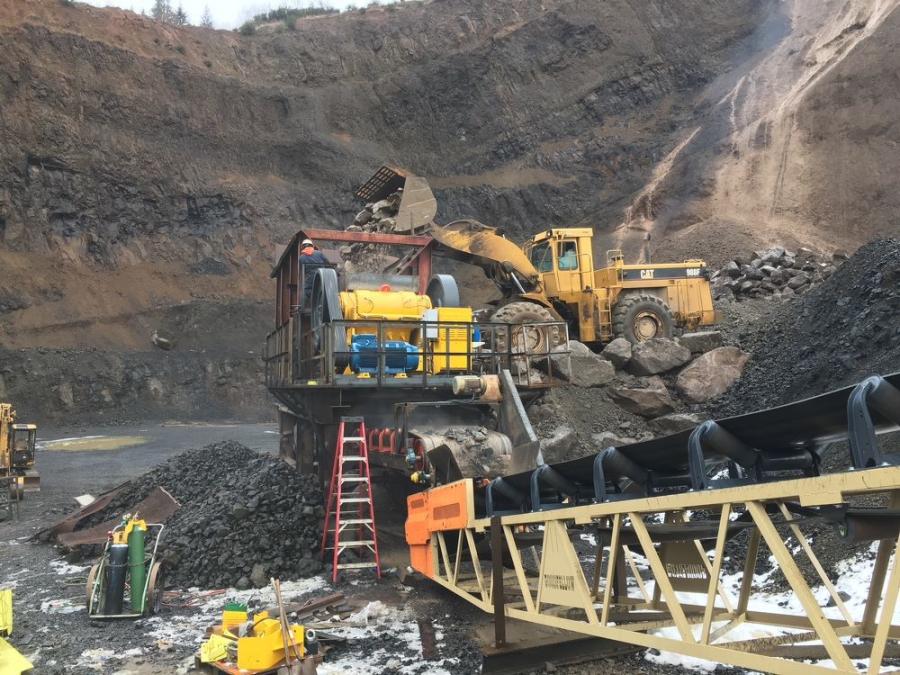 Dave Turin loves to operate heavy equipment and is licensed to do so.

Dave Turin didn't hesitate when asked to sign. After all, the unique petition expressed his sentiments on infrastructure. 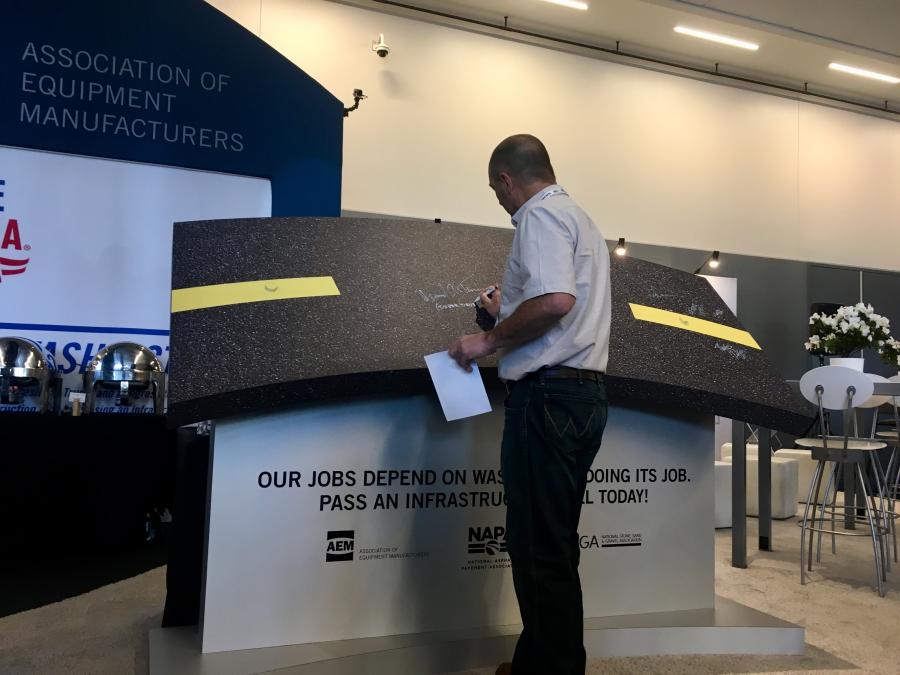 A 3 by 6-ft. piece of plastic molded to look like asphalt was made available at the World of Asphalt Show in Houston to send a message to Washington, D.C. The decision brought a no-brainer to “Dozer Dave” formerly of the hit TV show “Gold Rush.”

“You know, President Trump keeps talking about infrastructure, infrastructure,” Turin said. “Well, come on; Fund it, so that we can start building and fixing our roads. The economy is booming, but our roads suck. Man, we've got to do something with the traffic.”

Turin, who lives in Gresham, Ore., knows the importance of associations and how they work in conjunction with the government.

“The government doesn't always make real good decisions based on the business end of it,” Turin said. “There was a time when I traveled to Washington, D.C., with the Asphalt Pavers Association and met with senators and congressmen, so I understand that they need to hear our voice.

“So many times, we become as business owners too stinking busy to do the political stuff, and it needs to be done. When the AEM [Association of Equipment Manufacturers] asked me to [sign the petition], I was like, 'Heck yeah, that's something that everybody has to do.'”

Turin is an advocate of the construction industry, simple as that.

“It's such an honorable profession,” Turin said. “Sometimes we get overlooked. And it's not sexy, but it's hard work. I've always told my wife when I come home — I'm dirty and everything, but I tell her it's good, clean dirt. At the end of the day when we build something we see the fruit of our labors.

“We can see the road that we built and have pride in it. To me that's America. We're building something and we're making people's lives better. I think it's a great industry. If I look another contractor in the eyes and shake his hand, I know he's going to follow through with what he's doing.”

Growing Up in the Industry

Turin grew up around heavy equipment and the construction industry.

His father Jim taught at a high school in Sandy, Ore., and he coached the football team.

Turin grew up on the back of a paver. He and his brothers served as his father's crew at Jim Turin and Sons.

“We started doing driveways,” Turin said. “We paved Mom and Dad's driveway first. Then the neighbor liked it and we paved theirs, and off we went. We started a paving company.”

Initially, they used a “drag-box” style paver. The first ones they owned were Layton pavers, and as the company grew the went to Blaw Knox pavers, which were bought out by Ingersoll Rand. Volvo bought them out, so that's what they use today.

“I believe that they are the best paver on the market,” Turin said.

Turin played high school football, and went on to play at Oregon State, where he also studied engineering. Eventually, he finished his work for a civil engineering degree at Portland State.

After Turin got married and had three kids, he came to the realization that the family paving business wasn't lucrative enough to support his parents and his three brothers (all of the brothers were part owners of the business), so Turin ventured out to find a job.

“I actually got in a wood-paneled station wagon, packed up my three kids and my wife,” he said. “We went to Arizona, went to Nevada, we went to California, and I was just passing out resumes. This was early '80s when the economy tanked. At that same time, we had an asphalt plant at a rock quarry, and the rock quarry was going into bankruptcy. Dad and my brothers said, 'Let's look at buying them out of bankruptcy.'”

Turin, his father and brothers pooled their money and added the rock quarry to their paving business. The operation has run smoothly since.

“It's been good,” Turin said. “Our family's still tight to this day. Mom and Dad are still alive. They're not in the business. The brothers bought them out about 15 years ago. And we've been running it ever since.”

In the midst of being a part of a family business, Turin found his way onto “Gold Rush,” a show that included the father and son team of Todd and Jack Hoffman.

“I knew Todd Hoffman and he asked me to look at some equipment that he had bought at auction, because he was going gold mining in Alaska,” Turin said. “I went and looked at the equipment, and it was a mess, but I helped him out. I taught him about mining, screening, moving dirt, we wired up his first generator, we tested his pumps for him, just helping a brother out.”

During that process, Todd told Turin he planned on doing a TV show.

“I said, 'Yeah, right, good luck with that,'” Turin said. “He called me up in May and told me he was loading up and asked me if I could help, I said sure, I showed up and low and behold there was cameras, sound guys, and producers. Wow, he did it. He pulled it off, we were making a tv show.

“I went up to Alaska two different times to help Todd's crew mine. That first season I appeared in three episodes out of 10 and did not get paid. Season two they asked if I would join the crew, and I split half my time with the family business and half time gold mining. I was on the show for seven years.”

Looking back at his time on the show, Turin especially enjoyed the process of leading a group of guys, who did not have any mining experience, and turning them into a team.

“The first year I helped them, there wasn't much team work, so I vowed to turn them into a team,” Turin said. “We met every morning in year two and did a Bible Study and my wife cooked breakfast for us. It was a great way to start the day and build team work.

“The other thing I enjoyed was the actual gold mining element, I loved the whole challenge of finding gold and then trying to figure out how to get it out of the ground and make money doing it. At the end of the day when you walk up to a sluice box and see it all lit up and glittering in the fading sunlight, there is no other feeling like it. That feeling hooks you.”

Even though he's no longer hunting riches on TV, Turin remains busy. 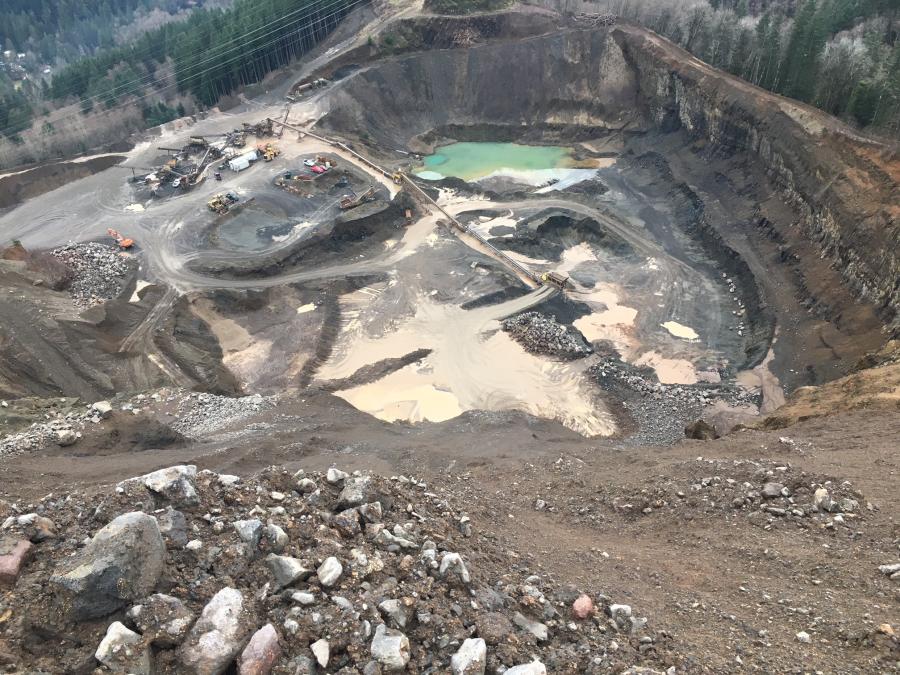 He continues to help the family quarry/paving company — Jim Turin and Sons, and Mount Hood Rock Products. And he is consulting for a group of venture capitalist who want to get into gold mines and gold properties.

Turin will always be a hands-on guy. He loves to operate heavy equipment and is licensed to do so.

“My favorite equipment to operate is the big dozers and cranes,” Turin said. “I like to operate our Cat D10 because you can close the door and you can't hear phones or radios, so you're on your own, just me and my machine, it's just lots of horsepower and brute force.

“Cranes, on the other hand, take some finesse. You have to be careful and in control. The hardest piece of equipment that I have operated is the rock drill, I had a hard time with that because you could not see what was going on down that hole.”

While Turin is passionate about big equipment, he's equally as passionate about finding a solution to the lack of skilled workers in the United States. He's been working with the AEM to try and rectify the problem.

“I truly believe our education system has made a huge mistake by taking trade-related profession things out of high schools and middle schools,” Turin said. “Now it's like you're looked down upon if you didn't go to a four-year college. That's bad. And I want to change that.

“I've been advocating with AEM in trying to get kids back into the trades. It's almost like you're a second-class citizen if you go into the trades. Well, let's change that. Let's get the good, motivated students into the trades and they'll make good money without being in a lot of debt.”

Who knows, they might even end up mining for gold.