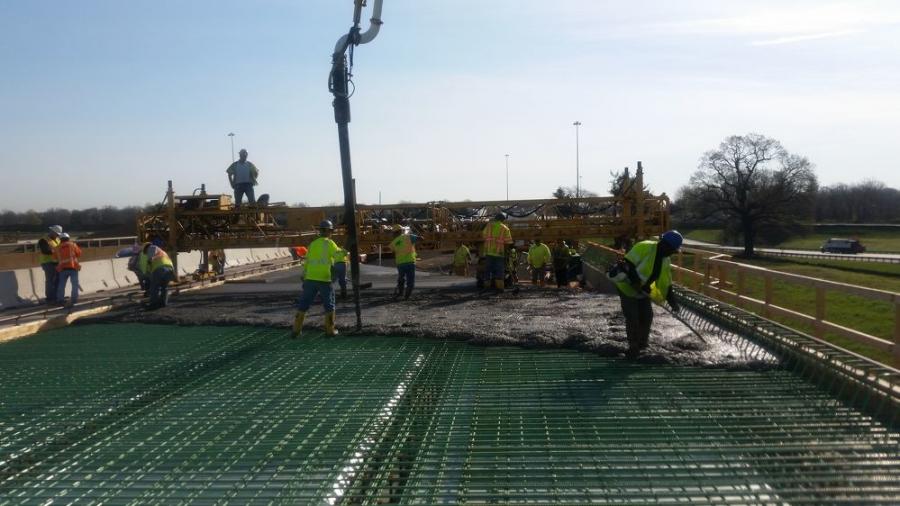 Concrete work finished up in summer 2017 with Mumford & Miller Concrete at the helm.

Multiple efforts are taking place simultaneously to make the Delaware Memorial Bridge and connecting highway a safer, more reliable thoroughfare now and in the future. From widening interchanges and rehabilitating ramps to new suspension ropes and a dehumidification system, these improvements will ease travel for the millions of motorists traversing between Delaware and New Jersey each year.

The Delaware Memorial Bridge links Delaware and New Jersey in twin suspension spans above the Delaware River, just north of the mouth of the Delaware Bay. The twin spans touch down in New Castle, Del., and in Pennsville, N.J. The bridge is a self-supporting toll bridge operated by the Delaware River and Bay Authority (DRBA), a bi-state agency. It also represents a lasting memorial to those soldiers who gave their lives in World War II, the Korean Conflict, Vietnam and Operation Desert Storm. Each year on Veterans Day, a special ceremony is held at the Bridge War Memorial, which overlooks the Twin Span.

The first span was built in April 1945 when the Delaware State Highway Department was authorized to construct and operate a crossing of the Delaware River. It took $44 million to build the graceful 440-ft.-high span, which opened to traffic on Aug. 15, 1951.

By 1955, nearly 8 million vehicles were crossing the bridge each year — almost double the original projection. As a result, talks about building a second bridge were soon under way, and a twin span was dedicated in 1968. Although the spans look identical, there are differences. Today, more than 80,000 vehicles cross the twin spans daily on their combined eight lanes. 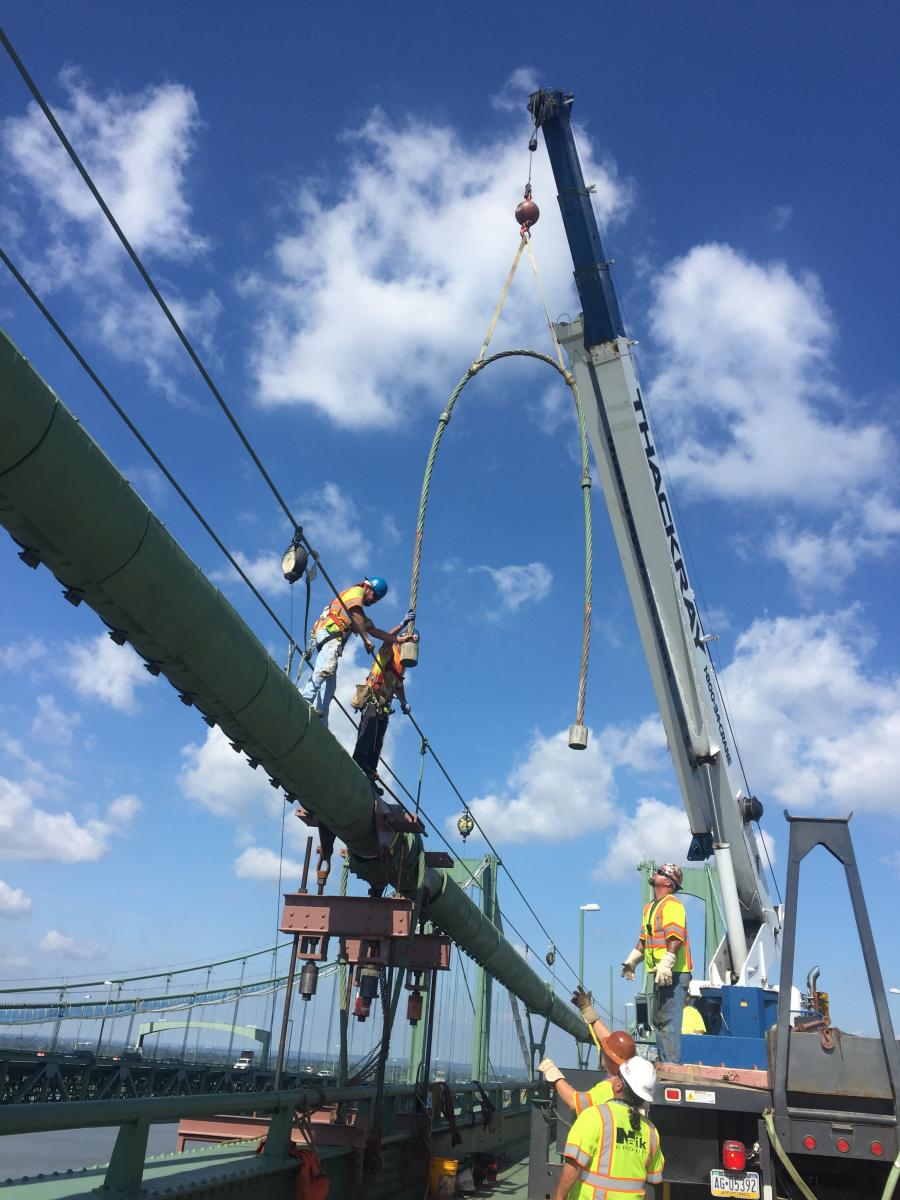 As a result of the cable investigation work done in 2010, it was determined that preventive measures were necessary to maintain the service life and capacity of the Delaware Memorial Bridge structures. The project includes designing and constructing a dehumidification system to preserve the main suspension cables. The process requires the fitting of air-tight wraps around the main cables, positioning injection and exhaust ports, and installing advanced dehumidification plants inside the anchorages of the two bridges.

The $34 million system also will be equipped with remote sensors and advanced monitoring systems to ensure it is functioning as intended. American Bridge Company of Coraopolis, Pa., began working on this in February 2016 and the system will be up and running this year. 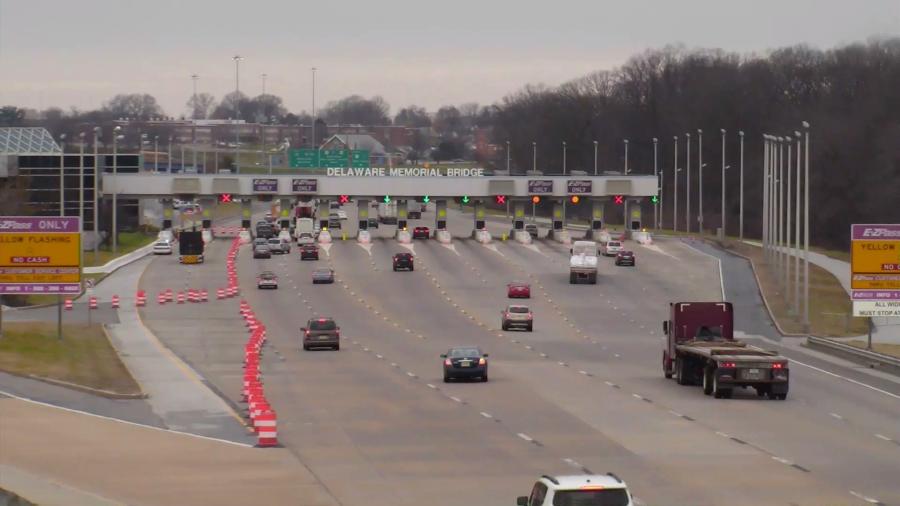 The existing electronic toll collection (ETC) system located at the southbound base of the Delaware Memorial Bridge is more than 10 years old and, by industry standards, is nearing the end of its useful life. The project includes replacement of system hardware and software with a new advanced ETC system that will safeguard against having unplanned interruptions and provide for more reliable toll collection. Xerox State and Local Solutions of Germantown, Md., began installing the new $7.6 million toll system in 2016. The system will be operable this summer.

“The new system is more technologically advanced. The transponder reader and antenna equipment will be replaced with new multi-protocol equipment. This effectively positions our bridge for the evolution of national interoperability standards mandated by Congress, which is quickly gaining momentum,” explained Jim Salmon, DRBA public information officer.

The bridge repairs, tolls system and I-295 improvements have all been funded by tolls collected at the Delaware Memorial Bridge Toll Plaza, apart from $7 million allocated by the Delaware Department of Transportation (DelDOT). Toll rates have remained constant for the last seven years, but with the depletion of funds for the aforementioned projects, Salmon said the DRBA is currently evaluating the toll structure and an increase is quite possible in the next year.

In February 2016, the DRBA began the first stage of the I-295 Southbound Reconstruction Project from Landers Lane to I-95. 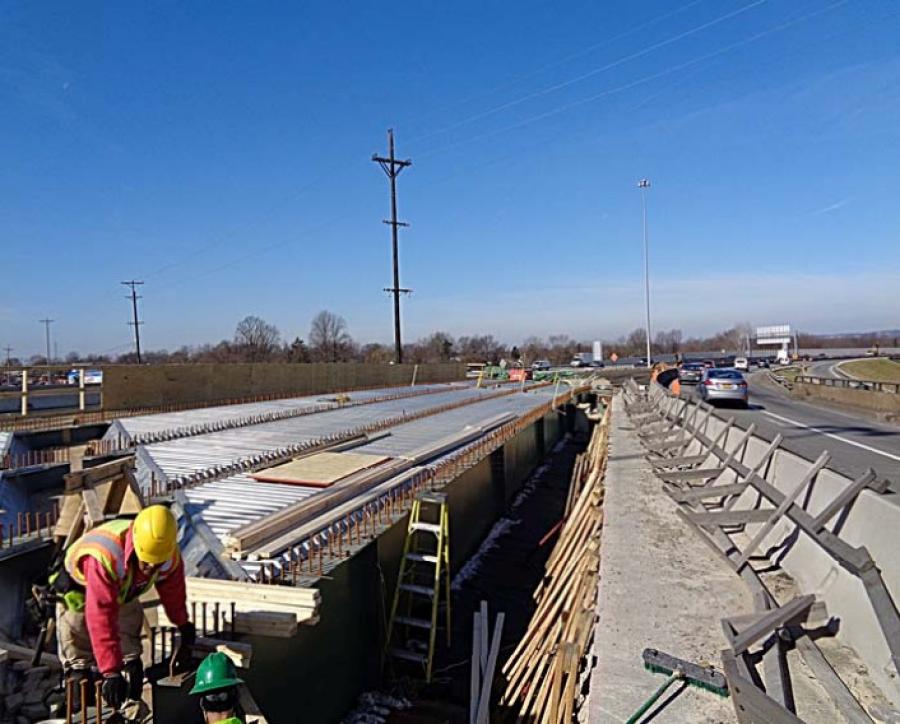 The I-295 southbound ramp and approach improvements to the Delaware Memorial Bridge are designed to improve roadway safety while rehabilitating aging roadways, ramps and bridges. New traffic patterns are being created and bridges over abandoned railroad lines are being removed. An important element of the construction is the elimination of traffic weaving, a big safety concern, across I-295 south between the I-95/I-495 and U.S. 13 interchanges.

Additional elements include: adding a third lane through the U.S. 13 interchange to provide adequate space and lane continuity; reconstructing and upgrading pavement; restructuring merge lanes at the U.S. 13 interchange; and superstructure replacement/substructure repairs on the I-295 south bridge over U.S. 13. Crews also will remove the low-clearance ramp bridge over I-295 north. The DRBA is responsible for all ramps and approaches on the Delaware side of the twin spans and is working with DelDOT to make these improvements.

The goal of the reconstruction project is to rehabilitate the approach roads and ramps to improve the highway's efficiency and safety while limiting the impact on the traveling public during the construction. At the conclusion of the project, I-295 southbound mainline traffic lanes will have 50 percent more capacity. Mumford & Miller Concrete Inc. of Middletown, Del., is executing the construction work at a cost of $33.7 million.

The I-295 southbound Landers Lane to I-95 project marks the final phase of safety improvements along I‐295 in New Jersey and Delaware which began in 1999. Upon conclusion in April 2019, the Authority will have invested more than $90 million to improve the region's infrastructure during the course of the I-295 Delaware Memorial Bridge Approach Road Rehabilitation program.