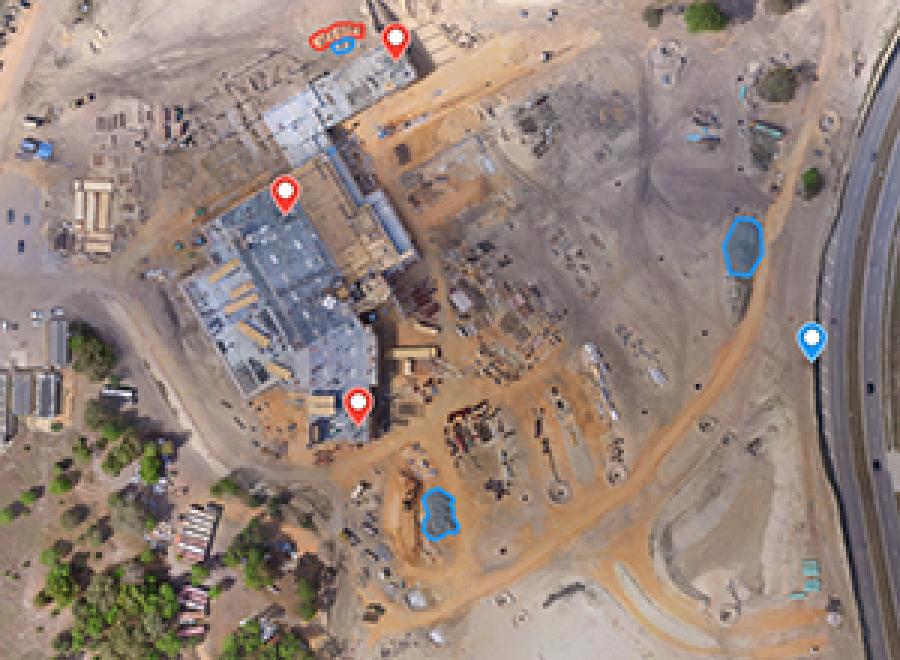 Image collected by drone of hospital project in Apopka, Florida.

Drone technology is helping create greater efficiency in construction. On a hospital project in Apopka, Florida, our team used drones and related new technologies to conduct mapping that resulted in significant time and schedule savings.

Following grading work on the 61-acre hospital construction site, Brasfield & Gorrie's project team needed to verify the completed earthwork and determine the difference between the overall site grade and the proposed finish grade. The size of the site made it a great candidate for drone mapping, since measuring the elevations of the earthwork using traditional methods would have been expensive and time-consuming.

Because the map would be used for comparative analysis, it was important that the map overlay properly with the design drawings. To ensure a high degree of accuracy, Brasfield & Gorrie incorporated ground control points.

After flying the site, Brasfield & Gorrie used the captured imagery to create an orthomosaic map, elevation map, and 3D model.

Entering the ground-based measurements of the ground control points ensured the map could be aligned with a high degree of accuracy. Then, the team clean-cut-and-fill-final-vs-design-editexported the 3D model as a point cloud and used software to project the model into the same local coordinate system used in the design file.

Once the two models were properly aligned, the team compared the model of the actual site with the design file. The final output was a heat map showing the subcontractor's earthwork progress relative to the plan. Green indicated areas where actual elevations matched the design plans. Areas in blue were too low, while areas in red were too high.

From the heat map, it was clear to see the progress completed to date and determine that more grading was needed.

Using a drone to map the area allowed the team to assess earthwork on the site much more quickly compared to traditional methods, while also providing a higher degree of detail.

According to the project team, completing the same task with traditional methods would have required more than 1,000 survey shots. Collecting this volume of shots manually would have seriously impacted the project schedule or required significant, expensive overtime.

Using the drone, the team easily captured far more than 1,000 data points in a much shorter timeframe, saving time and money, and resulting in a much more detailed model of the site's elevation.

Overall, the use of drone mapping resulted in significant time and cost savings for the project.

“Our team estimated that we spent approximately one third of what it would have cost to verify these conditions using traditional methods,” said Brasfield & Gorrie VDC Coordinator Jesse Creech.