Years ago, the owners of a home on Camelback Mountain near Phoenix, Ariz., began removing approximately 14,400 cu. ft. (407.8 cu m) from the side of the mountain. 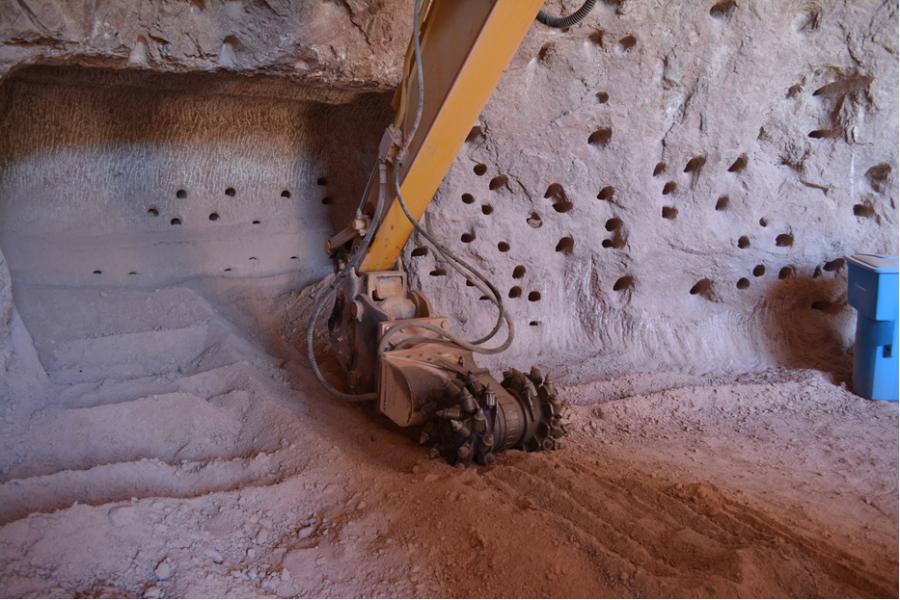 The ER 650 attached easily to the stick of the Komatsu PC228.

Years ago, the owners of a home on Camelback Mountain near Phoenix, Ariz., began removing approximately 14,400 cu. ft. (407.8 cu m) from the side of the mountain. They hoped to create what they called a “garage.”

The 20- by 20-ft. (6- by 6-m) wide by 36-ft. (11 m) high space took years to create, using a combination of hydraulic drills and hammers. But work stalled when the original owners sold the property and the space sat unfinished — until this year, when new owners decided to complete the project.

The house sits on the southwest facing side of the mountain, while the “garage” faces in a more northerly direction. The new owners' goal was to have a walkway through the mountain connecting the garage to the living quarters.

Employing the same hydraulic drills and hammers, the contractor quickly determined that another solution was needed to create the walkway from the garage to the home. Their limited efforts to open the passage through the mostly granite mountain resulted in noise and vibration complaints from the surrounding neighborhood, grinding the project to a slow crawl. In the words of Mike Mitchell of Landis Mitchell Engineers, “The hammer was noisy and not at all cost-effective when you consider the time involved.”

The engineering firm, which also owns the property, found the answer in a partnership between Komatsu dealer Road Machinery and Drumcutters, a manufacturer of hydraulic attachments for cutting and grinding.

The Drumcutters ER 650, which Mitchell had seen on a similar job in the area, is a revolving rotary drum cutter unit and is often used in tunneling. Using the attachment on a Komatsu PC228 LC has proven effective in tunneling — and quietly so — through the hard rock.

The rock removal portion of the garage project, which includes the walkway up to the living quarters, was completed in late February, and work on the entire project, which, in part, involves constructing a garage door, will wrap up soon.

According to Mike Denton, account manager of Road Machinery, “in three weeks, the contractor was able to do the equivalent of nine months of work if he had been using the drilling/hammering method.”

The ER 650's 10,900 ft*lbf of cutting force was powered effectively by the Komatsu excavator.

“It was the perfect application for the PC228 LC,” said Denton. “The Komatsu has the perfect combination of needed hydraulic power and torque to turn the drum cutter and the tight tail swing necessary to maneuver in the garage area.”

In addition to cutting the 20- by 9- by 5-ft. (6- by 3- by 1.5-m) walkway, a “tool area” was cut farther into the mountain on the back side of the garage. All of this was accomplished in approximately three weeks, according to Tim Schutte, regional sales manager of Drumcutters.