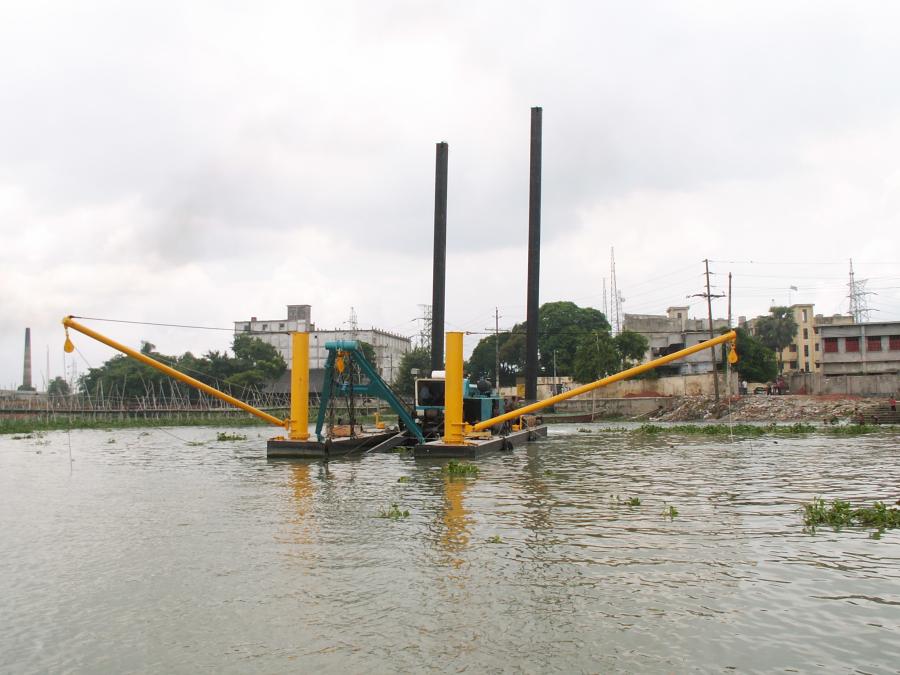 DSC Dredge LLC, based in Reserve, La., recently shipped one of three new 18-inch Shark Class portable cutter suction dredges to contractors in Bangladesh. The first dredge unit left DSC's Louisiana facility in June, and the second unit will leave DSC's Mississippi facility later in July. The third unit is scheduled to be completed and shipped in February 2018. The contractors will use the new dredges to restore navigability to Bangladesh's 24,000 km of rivers, streams and canals under Bangladesh Inland Water Transport Authority (BIWTA) and Bangladesh Water Development Board (BWDB) projects.

Bangladesh's waterways together cover about 7 percent of the country's surface; its 53 separate water routes serve an important role in linking parts of the country together. The network of waterways reaches its maximum size during the country's monsoon period, with a total 5,968 km navigable by mechanized vessels during that time. The network shrinks to about 3,865 km during the dry period. The BIWTA is the agency that controls and is responsible for development and maintenance of the inland water transport system in Bangladesh. The BWDB manages water resources – including flood control, drainage, and irrigation projects aimed at increasing agricultural and fishery resources.

Following a 2009 study, the BIWTA has been calling on private contractors to help meet the demand for river dredging in Bangladesh. DSC delivered its first 18-inch Shark dredge to a contractor there in 2010. In 2011, DSC delivered the country's largest dredges – two 24-inch Marlin Class dredges, each with 23-meter digging depth capability. During their first three years of service, the units worked 20 hours per day, six days per week. They both have well over 10,000 hours of use to date, and are still hard at work today.

Each of the three new Shark dredge units is powered by a single Caterpillar C32 ACERT diesel engine, rated 1125 hp, and features 17-meter digging depth capability. The modern DSC design of a single engine and advanced hydraulic system provides maximum fuel efficiency and long component life. Older designs require two engines for peak performance, one for the dredge pump and one for the hydraulic system. With fuel being the highest single cost of operating a dredge, the fuel savings realized by the elimination of one engine are significant. The DSC hydraulic system design provides the same peak level of performance with just one engine.

DSC provides its clients with complete OEM spare parts information, allowing them to keep their dredges operating at peak efficiency with commonly sourced parts – a practice that is critical for international clients. Many other dredge manufacturers change OEM part numbers to their own numbering system, resulting in a single source for spares that is often located on the other side of the world. With the DSC spare parts policy, clients can purchase parts from a local distributor and quickly resume operation, rather than waiting on international air shipments, customs and all the costs associated with lengthy downtime.