Within minutes, the revelry of New Year's Eve in Dubai turned to horror as flames raced up the side of one of the glistening city's most prominent buildings. 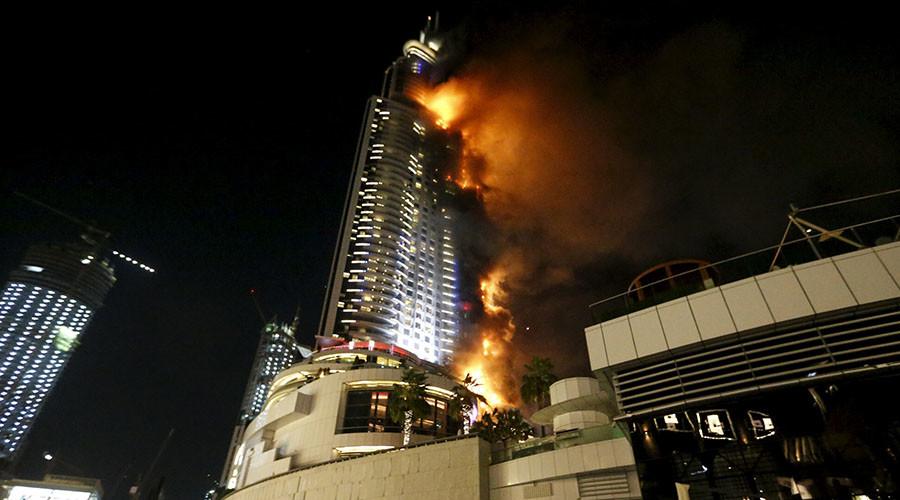 Within minutes, the revelry of New Year's Eve in Dubai turned to horror as those gathered for fireworks downtown watched flames race up the side of one of the glistening city's most prominent luxury hotels.

DUBAI, United Arab Emirates (AP) _ Within minutes, the revelry of New Year's Eve in Dubai turned to horror as those gathered for fireworks downtown watched flames race up the side of one of the glistening city's most prominent luxury hotels.

But the fire at the 63-story The Address Downtown Dubai wasn't the first, second or even third blaze to spread swiftly along the exterior of skyscrapers that have risen from the desert at a torrid pace in and around Dubai over the past two decades.

It was at least the eighth such fire in the Emirates alone, and similar blazes have struck major cities across the world, killing dozens of people, according to an Associated Press survey.

The reason, building and safety experts say, is the material used for the buildings' sidings, called aluminum composite panel cladding. While types of cladding can be made with fire-resistant material, experts say those that have caught fire in Dubai and elsewhere weren't designed to meet stricter safety standards and often were put onto buildings without any breaks to slow or halt a possible blaze.

While new regulations are now in place for construction in Dubai and other cities, experts acknowledge they have no idea how many skyscrapers have the potentially combustible paneling and are at risk of similar fast-moving fires.

“It's like a wildfire going up the sides of the building,” said Thom Bohlen, chief technical officer at the Middle East Center for Sustainable Development in Dubai. “It's very difficult to control and it's very fast. It happens extremely fast.”

Cladding came into vogue over a decade ago, as Dubai's building boom was well underway. Developers use it because it offers a modern finish to buildings, allows dust to wash off during rains, and is relatively simple and cheap to install.

Dubai has since burgeoned into a cosmopolitan business hub of more than 2 million people. As in other Emirati cities, foreign residents far outnumber the local population. Expatriate professionals in particular are drawn to the ear-popping apartments the city's hundreds of high-rises offer, and skyscraper hotels accommodate millions of guests each year. The city-state aims to attract 20 million visitors annually by the time it hosts the World Expo in 2020.

That means the risk of high-rise fires touches people from all over the world.

Typically, the cladding is a half-millimeter (0.02-inch) thick piece of aluminum attached to a foam core that is sandwiched to another similar skin. The panels are then affixed to the side of a building, one piece after another.

The biggest problem lies with panel cores that are all or mostly polyethylene, a common type of plastic, said Andy Dean, the Mideast head of facades at the engineering consultancy WSP Global.

“The ones with 100-percent polyethylene core can burn quiet readily,” Dean said. “Some of the older, even fire-rated materials, still have quite a lot of polymer in them.”

The panels themselves don't spark the fires, and the risks can be lessened if they are installed with breaks between them to curb a fire's spread. The panels' flammability can be significantly reduced by replacing some of the plastic inside the panels with material that doesn't burn so easily.

However, when installed uninterrupted row after row, more flammable types of cladding provide a straight line of kindling up the side of a tower.

That was the case in 2012 when a spate of fires struck Dubai and the neighboring emirate of Sharjah. Blaze after blaze, though some ignited differently, behaved the same way: fire rushed up and down the sides of the buildings, fueled by the external panels.

The day after an April 2012 fire at a 40-story building in Sharjah, Dubai issued new building regulations barring the use of cladding constructed with flammable material. Officials elsewhere in the United Arab Emirates followed suit, though by that time, the building boom had subsided in the wake of a global recession.

But the rules did not call for retrofitting buildings with flammable cladding already installed _ nor is there any clear idea of how many of these buildings stand in Dubai or the UAE's other six emirates.

Local experts have suggested as many as 70 percent of the towers in the Dubai may contain the material, though they acknowledge the figure is only an estimate as there are apparently no official records.

“There's an exposure because there's a lot of them and unfortunately they don't come with an `X' on the building to know which ones they are,” said Sami Sayegh, global property executive in the Middle East and North Africa for insurance giant American International Group, Inc.

Emaar Properties, which developed The Address Downtown and nearby properties including the Burj Khalifa, the world's tallest building, said authorities are still investigating the New Year's Eve fire. It has hired an outside contractor to assess and restore the damaged tower, and it plans to reopen the hotel, based on orders from Dubai's ruler himself. It has not released specific details about the type of cladding used.

However, The National, a state-owned newspaper in Abu Dhabi, has reported that the cladding used on The Address Downtown was the fire-prone type seen in other blazes.

A nationwide survey of existing buildings has been ordered in the wake of The Address fire, and additional guidelines will be put in place in March to ensure new buildings are constructed to a higher standard, he said.

However, Ibrahim insisted that the type of cladding that was involved in previous tower fires appears to have been used on only a small number of all buildings in the emirate _ a figure he suggested could be as little as 5 percent. But he acknowledged that officials don't know how many buildings are at risk.

“Without (doing) the survey or something, we can't say the number exactly,” he said.

The problem is not Dubai's alone _ cladding fires have struck elsewhere in the world.

In 2010, a similar fire at a Shanghai high-rise killed at least 58 people. An apartment fire in May in Azerbaijan's capital, Baku, killed 16. Another dramatic blaze hit Beijing's TV Cultural Center in February 2009, killing a firefighter.

All bore similarities to the Dubai fires, with flames racing up the sides of the building, and experts attributed each fire's speed to the cladding.

Peter Rau, the chief officer of the Metropolitan Fire Brigade in Melbourne, Australia, knows firsthand how dangerous such fires can be. In November 2014, a fire erupted at a 23-story apartment building in Melbourne and raced up more than 20 stories in just six minutes as flaming debris rained down below. While no one was injured, the fast-moving blaze did millions of dollars' worth of damage to the building.

In the aftermath of the blaze, fire officials discovered some 170 other buildings in the Melbourne area had similar, flammable siding, Rau said.

“You know you've only got to step back a little bit further and say: `What does it mean for Australia and what does it mean (when) you're talking to me from Dubai?”' Rau said. “This is a significant issue worldwide, I would suggest... There is no question this is a game changer.”