The Minnesota Department of Transportation (MnDOT) is testing a pilot program in which a bonus is paid or penalty assessed, based on temperature readings for every 150-foot segment. 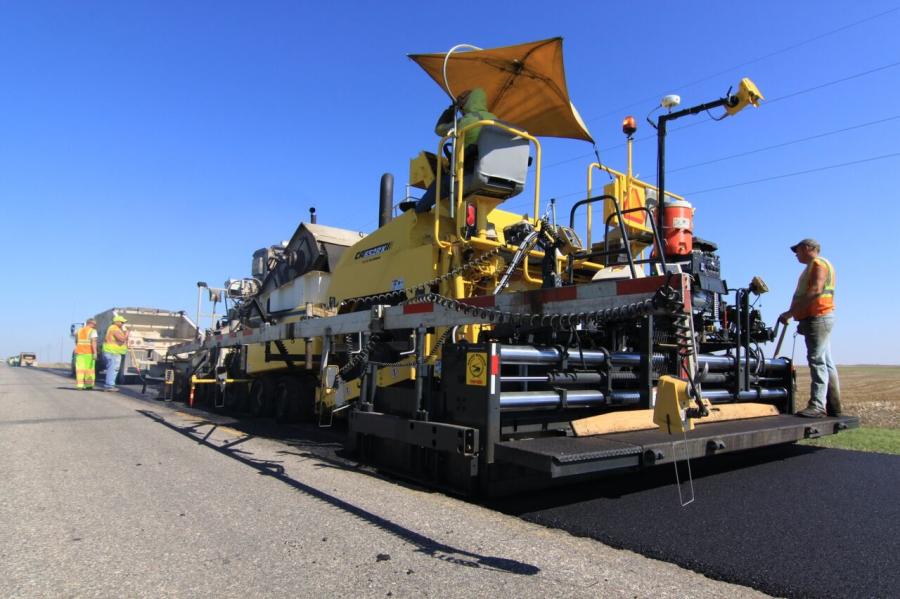 For Jason Duininck, partner of Duininck Inc. of Prinsburg, Minn., trying out the Cedarapids CR652RX Remix paver was all about building a higher quality road. “We were seeing some segregation at the end of the truck dump and were hoping to eliminate the shadow,” he said.

The road rehabilitation project was State Highway 86 in Jackson County, Minn., which required milling the top 2 in. (50.8 mm) of asphalt and widening the road by 2 ft. (0.61 m), so the crew was paving 14-ft. (4.3 m) wide lanes. Spanning 9.4 mi. (15.1 km), the $3.2 million paving project ran from the Iowa-Minnesota border at the south end to Interstate 90 at the north end, where it joined a previously reconstructed bridge spanning I-90.

The contractor also wanted to achieve consistent mix temperatures across the entire mat width, so the crew could attain the 92 percent compaction density and receive bonus for temperature uniformity. “The Minnesota Department of Transportation (MnDOT) is testing a pilot program in which a bonus is paid or penalty assessed, based on temperature readings for every 150-foot segment,” said Bill Rieken, paver application specialist of Bomag Americas.

When contractors begin seeing shadows from particle segregation, then chances are that invisible-to-the-eye thermal segregation also is present. The trucking pattern Duininck established for the Highway 86 project included 8 belly dump trucks hauling only mix and 32 hauling both mix and millings along the 20-mi. (32.2 km) one-way trip, which allowed the mix to cool from the plant to the jobsite. “The asphalt left the plant between 305 degrees to 315 degrees, so it would arrive to the site at 270 degrees,” said Heglund.

“By design,” said Dave Hosch, vice president of Ruffridge-Johnson Equipment Company Inc. of Minneapolis, Minn., a Bomag distributor in Minnesota, “the slat conveyor of a conventional paver pulls material from the front of the hopper back to spreading augers.”

Neither was the windrow pick-up machine attached to the front of the paver. It does not offer reblending capabilities, so segregated material in the windrow remains segregated behind the paver. “A contractor could add an MTV to the train, but this adds costs to the paving process,” said Rieken. “Some larger material transfer vehicles add up to $1.50/ton to the paving costs and are costly to move.”

So Duininck worked with Bomag Americas and Ruffridge-Johnson to schedule a demo of the Cedarapids CR652RX Remix Anti-Segregation System paver to see if it could help address some of the shadowing issues and help deliver uniform mat temperatures.

After the milling crew removed the 2 in. (50.8 mm) surface layer and holes in the base were patched, Duininck's paving crew worked to establish continuous paving. The plant and trucking strategy resulted in an average of 330 TPH (299 t/hr) of material flowing to the job site and laid in windrows. The asphalt was conveyed to the paver's hopper via a Cedarapids pick-up machine, which provided a continuous, non-contact paving process.

The pilot program on Highway 86 paving tested the feasibility of paying a bonus structure based on temperature differential and compaction densities as well as ride smoothness. Both the paver and compactors were equipped with sophisticated monitoring equipment to quantify temperature and compaction results, helping Duininck's crew to meet specifications.

Intelligent compaction technology installed on the rollers helped to ensure proper compaction specifications of 92 percent density were met without over-compacting. These systems are designed to take the guesswork out of reaching optimal compaction. They log detailed compaction documentation to back-up core testing results.

The mainline paver was equipped with the MOBA PAVE-IR system to map surface temperatures across the mat. The system uses infrared sensors to produce a thermal profile for the entire Highway 86 paving project. A full-color Thin Film Transistor (TFT) touchscreen displays real-time temperature data to the screed operator, and the system stores all the files for post-paving review. This data was then analyzed by MOBA Mobile Automation and MnDOT to determine mat temperature uniformity and the amount of bonus or penalty assessed.

Detecting temperature differentials during the paving process allowed Duininck to make corrective actions to asphalt production, truck loading, hauling and paving practices. Adding the Remix Anti-Segregation System paver to the train was one such corrective adjustment, as it offered mix reblending capabilities at the last stage of the paving process.

Whereas the slat conveyor simply channels asphalt from the paver hopper's front to the feed tunnel, the large-diameter, variable-pitch augers of the Remix paver provide a differential material draw-down across the shaft length to pull asphalt from all areas of the hopper. The interleafing augers aggressively reblend 100 percent of the asphalt in a figure-eight motion to diffuse segregated material over an area five times greater than traditional slat pavers. The end result is a more homogeneous mix with more uniform temperatures behind the screed.

Duininck's crew used a hopper insert inside the CR652RX paver to give some additional surge capacity to maintain continuous paving as much as possible. “Finding the right paving speed is the key to continuous paving, so that you are not outpacing plant production,” said Heglund.

The Cedarapids insert also helps to eliminate “dead flow” areas, so the asphalt does not cool. “It allows the material to free-flow and further helps to reestablish temperature uniformity,” said Rieken.

Upon adding the CR652RX to the Highway 86 paving train, operator's quickly picked up on the differences in operating the Remix paver, and they started to notice a difference in the mat behind the paver.

“The Remix augers offer a better asphalt reblending, and there were no shadows in the mat behind the paver,” said Heglund.

After inserting the Remix paver in the train, crew members checked some preliminary temperature uniformity data from the MOBA PAVE-IR system while paving. “We looked at three test shots of mat temperatures, and the ranges were 15, 18 and 20 degrees, said Heglund.

This put the contractor in the maximum bonus category for these mat project segments.

The CR652RX paver was used to pave one lane the full length of the project. After the demonstration, Duininck returned to paving with its traditional 10-ft. (3 m) mainline slat paver to complete the rest of the project.

Post completion analysis of the temperature data showed that the Remix paver produced a much higher percentage of 150 ft. (45.7 m) lane segment grids falling within the maximum bonus level than the slat conveyor. “This is the first opportunity we have had to look at data from both Remix auger and slat conveyor pavers on the same job, using the same mix, the same paving crew and reviewing data over a short time period of 15 days,” said Paul Angerhofer, product manager Pave-IR of MOBA Mobile Automation.

The analysis included five random project segments from both the Remix and slat pavers. Nearly 63 percent, the Remix paver readings fell within the 0 to 25 degree (0 to 14 degree C) temperature variation/ bonus range per 150 ft. (45.7 m) segment. Another 36 percent of the thermal readings landed within the 25 to 50 degree (14 to 27 degree C) category. Only 1.2 percent of the average class segregation readings fell above the 50 degree (27 degree C) temperature variation.

“With the variables of mix design including modified oil and long haul distance between plant and jobsite,” said Hosch, “there was a high chance of seeing segregation. This was not an easy job to pave, and that's why we recommended the Remix paver to Duininck.”

“The CR652RX has outboard spread auger drive, which allows the augers in front of screed to back up to each other,” he said. “This eliminates the center drive gearbox and the potential for centerline segregation and top-down cracking. Plus, the cost of ownership between a Remix and conventional slat paver is about the same, so contractors who regularly encounter high-profile jobs with tight specs should consider the addition of a Remix paver to their fleet.”