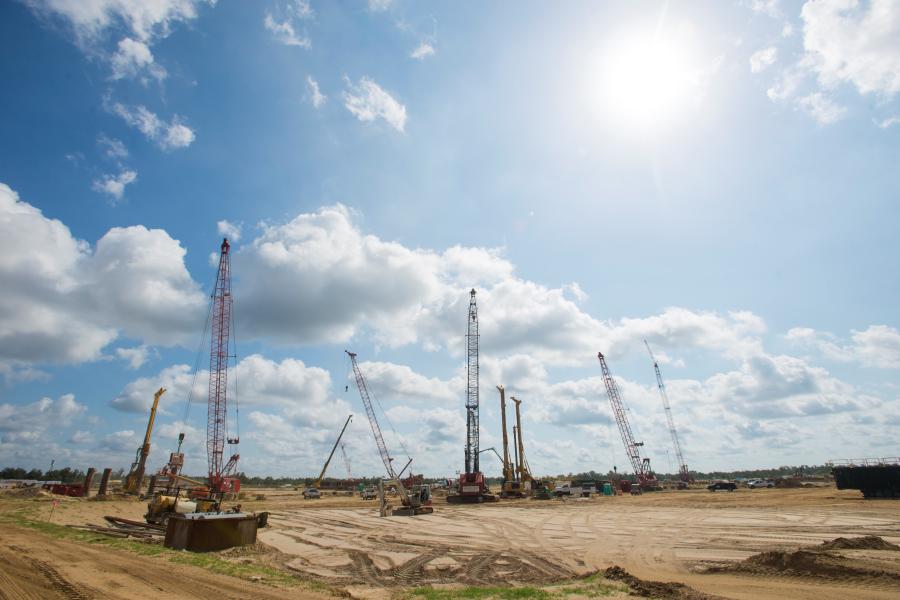 Duke Energy photo Considered one of the most important projects for Duke Energy, the combined-cycle natural gas plant in Citrus County, Fla., is among the largest under construction in the industry.

Considered one of the most important projects for Duke Energy, the combined-cycle natural gas plant in Citrus County, Fla., is among the largest under construction in the industry. The $1.5 billion, state-of-the-art plant will supply 1,640 megawatts of electricity to help serve the state's approximately 1.7 million customers in 2018.

“The one message about this project is our commitment to transforming the customer experience, modernizing the electric grid, generating with cleaner energy,” said Alex Glenn, Duke Energy Florida's state president.

At the formal groundbreaking in March 2016, which included more than 200 attendees, Glenn said, “We're going to change the face of our generating fleet with this new power plant. This is going to ensure the reliability of our system, and it's going to help reduce our air emissions.

“This is a great day, not only for our company, but for Citrus County.”

The plant will use clean-burning, highly efficient technology. It also will benefit the local economy and tax base. Construction and other activities are predicted to have an economic benefit of more than $600 million and create hundreds of temporary construction jobs.

Mike Delowery, Duke Energy vice-president, project management and construction, said, “It represents for us a chance to build our most advanced combined-cycle plant on the Duke system.”

The facility will receive natural gas through a 500-mi. (804 km) pipeline that Sabal Trail Transmission is constructing. The $3-billion pipeline will start in Alabama, extend through Georgia and end in central Florida. Sabal Trail Transmission will license, construct and operate the natural gas pipeline. The company expects to receive the natural gas as early as October 2017 to facilitate startup testing for the structure. In May, 2015, Duke Energy announced a $225 million investment and became a 7.5 percent owner of the Sabal Trail pipeline. As part owner, Duke Energy will be able to closely monitor the pipeline.

The plant will be built on 400 acres near the existing Crystal River Energy Complex in Citrus County. Officials have stated a combined-cycle plant is the most cost-effective option that can be constructed to meet customer demand expected by 2018.

Officials note the structure will be environmentally responsible, as well. Since 2005, Duke Energy has reduced its air emissions by nearly 80 percent and its carbon footprint by 15 percent. When the facility becomes operational in 2018, Duke Energy also will retire Crystal River coal-fired units 1 and 2, which were both built in the 1960s.

The structure will not require more ground water resources than what is already permitted at the Crystal River Energy Complex. The primary source of cooling will be salt water. The plant will be built on the east side of the property to minimize impacts to wetlands.

In October 2015, crews from engineering, procurement and construction contractor Fluor began clearing the land and building the site up eight feet for flood protection.

According to Heather Danenhower, Duke Energy communications manager circulating water pipe is being installed for the second power block, and major foundation work has started for the first steam turbine generator and the first heat recovery steam generator.

Laydown and warehouse personnel are unloading large modules for the heat recovery steam generators, combustion turbines and generators and the steam turbines and generators, as well as other materials for construction. All spools for power block 1 circulating water pipe have been placed underground, and back fill activities are currently underway. The drilled shafts for the steam turbine generator have been completed. The elevation for power block 1 and surrounding areas also has been raised.

“The primary focus has been earthwork and underground installations, leaving the majority of main construction tasks to be complete,” said Danenhower. “Major foundation work still remains for both power blocks. Next, the focus will be on setting major equipment for the combustion turbine generators, heat recovery steam generators and steam turbine generators. In addition to setting the major equipment for the power blocks, crews will erect structural steel.

“Any project of this magnitude faces challenges, but some unique challenges to the Citrus project include co-location and coordination with other generating facilities at the Crystal River Energy Complex, including four coal-fired units, a decommissioning nuclear plant and a Mariculture Center.”

Environmental sensitivities, such as protecting Florida's main source of drinking water, wetlands, gopher tortoises, eagle's nest, etc. also are concerns, along with threats of hurricanes and thunderstorms and the installation of unusually long runs of makeup water pipe to and from the existing plant's intake and discharge canals.

Handling the large heat recovery steam generator module sections, which require more coordination on the front end and the use of cranes with more capacity, also is a significant consideration. Although the heat recovery steam generator module sections are more challenging to lift, they will require less onsite assembly, which benefits the project. In addition, on-site pre-assembly of pipe rack module sections to cause less congestion and a safer work environment will require larger engineered lifts, compared to a traditional stick-built approach.

Structural steel will be used for structures, such as the pipe racks that will run between the heat recovery steam generators and combustion turbine generators. The various piping systems on site will contain various materials, such as high-density polyethylene, ductile iron, chrome molly, stainless steel, carbon steel and concrete for the underground circulating water pipe. More than 280,000 ft. (85,344 m) of power and control cable will run in a combination of underground duct banks and above ground cable tray.

The plant will feature combined-cycle technology, which includes a heat recovery system.

“The first process includes a combustion turbine that operates like a jet engine that draws in outside air and compresses it to high pressure,” Danenhower said. “The pressurized air mixes with natural gas and is then burned, creating hot exhaust gases. These gases power the combustion turbine, spin a generator and, ultimately, make electricity.

Danenhower said combined-cycle technology is highly efficient, because of this heat recovery system.

“Without this system, all of the heat from the hot exhaust gases would be released to the atmosphere instead of being captured and used to generate steam and make more electricity without the need of an additional fuel source. The site received the heat recovery steam generator modules in March 2016.

Onsite assembly will begin with a crane standing the module panels up, and then assembling the panels together. This pre-fabrication allows various systems that are contained within the heat recovery steam generator to fit-up and tie-in to the module panels.”

The project will reportedly benefit dozens of companies around the world, across the United States and locally. For example, the back fill material for the foundation, dump trucks hauling the material and fencing are all from local suppliers.

Industrial construction projects require specialized skills, training and qualifications. A variety of workers, including equipment operators, iron workers, welders, pipe fitters, concrete pourers and electricians have been hired to complete the highly anticipated project. Between 50 to 75 workers will be required to operate and maintain the plant when it comes online.

Employment will peak at roughly 700 workers and average 450 employees for approximately two years, with the highest employment during 2017.

According to Josh Wooten, the president and CEO of the Citrus County Chamber of Commerce, “We are very fortunate to have been chosen for this project. Between the closing of the nuclear facility and crash of the housing market, Citrus County was hit especially hard.”

Wooten said the gas plant will give the area — best known as the home of the manatee — a much needed push, both in jobs and putting a billion dollar facility on the tax rolls.

“The initial jobs created to build the facility will create a much needed economic boost, especially to our small businesses. The 70 projected permanent high wage, full-time jobs upon completion will be most welcome, as we fight our way back to a healthy economy.

The plant will pay approximately $4.1 million in yearly property taxes once both units are operational.

“Citrus County is in a unique position to get this project, and other similar energy sector projects,” said Wooten. “We have been home to Florida Power/Progress Energy/ Duke Energy since the 1960s. We pride ourselves on being one of the largest exporters of electricity in the southeast United States,” Wooten said.

“The whole community is excited. It's a much-appreciated economic stimulus for our area. Citrus County is in the heart of the Nature Coast of Florida. Being known as a major producer of clean energy fits well with our quality of life.”

With its Florida regional headquarters located in St. Petersburg, Duke Energy is one of the largest electric power holding companies in the United States. Headquartered in Charlotte, North Carolina, Duke Energy has a total U.S. generating capacity of 52,700 megawatts and employs close to 30,000 people. Duke Energy has a customer base of 7.4 million retail electric customers in six states, representing a population of approximately 24 million people. Its 2015 operating revenues totaled $23.5 billion.