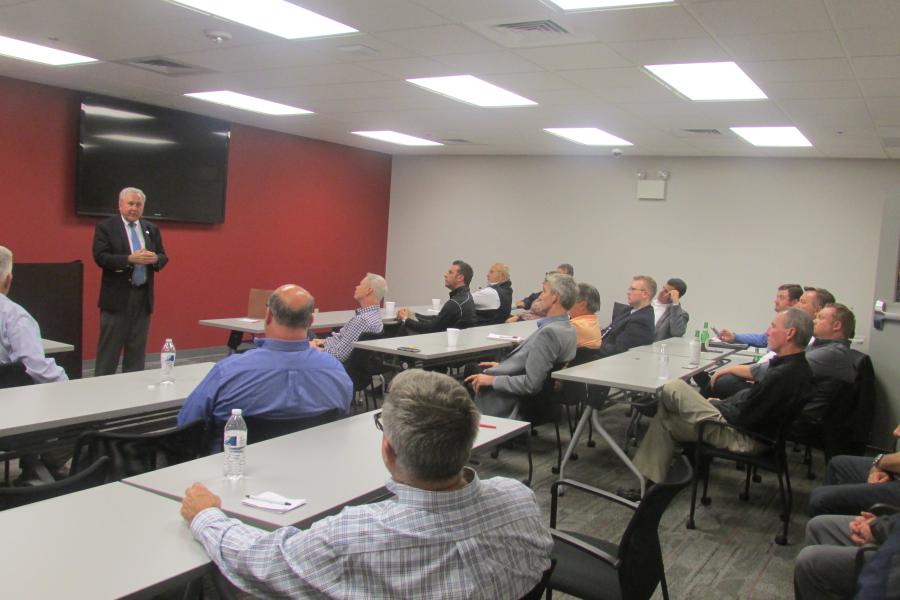 Pennsylvania State Sen. John Rafferty Jr. (R, 44th Senatorial District) was the invited speaker and discussed with DVAED members the state of Pennsylvania's infrastructure and transportation funding, as well as the contentious issue of money coming out of the motor license fund to pay for Pennsylvania State Police coverage in small municipalities.

“That [state police funding] was spoken of at all of our meetings in the 1990s when Tom Ridge was governor,” Rafferty said. “For whatever reason, the governor and the legislature decided they weren't going to worry about the state police as a budget item anymore and they moved them into the motor license fund, so that's how long the state police have been there. It just kind of got attention because of the new transportation bill that they are in there. We never hid that.”

Rafferty said that a number of his colleagues in the senate and a number of people in the house, and even Democrat Gov. Tom Wolf, all agree that state police funding should not be in a transportation bill but added, ultimately, nobody will do anything about it.

“It's going to take some kind of revenue bill to fund the state police to get them out of there [the transportation fund] and they don't want to do it,” he said.

But passing a bill to do just that would be problematic.

“If a revenue bill came up — the ones in the southeast, the senators and representatives (republicans and democrats), we would vote for it — probably a number in the west would vote for it, but the rest of the state is not going to vote for it. Why? Because they are getting free state police coverage.”

The trouble started in March 2016 when the Associated Press reported on Pennsylvania's municipalities having an option to rely on the state police for some or all of their protection at no additional cost. Half of Pennsylvania's 2,561 municipalities — in some cases entire counties — take advantage of this option.

As a result, money from Pennsylvania's Motor License Fund that includes taxes on fuel, license and registration fees, which is supposed to be earmarked for use on highway and bridge construction projects also was being used to subsidize the Pennsylvania State Police (PSP). This practice also called into question whether or not it was even constitutional to do so, even though money for the fund already was being budgeted to cover state police expenses.

Section 11 of Pennsylvania's Constitution states that fuel taxes, vehicle registration and license fees be used “solely for construction, reconstruction, maintenance and repair of and safety on public highways and bridges” and “shall not be diverted by transfer or otherwise to any other purpose.”

The Pennsylvania House of Representatives responded to this issue by asking the Legislative Budget and Finance Committee (LB&FC) to review this practice. Specifically, the house wanted to find out how much money was actually being spent for state police work involving “safety on public highways and bridges” versus how much was budgeted for that work.

When the committee concluded its study, it found that for fiscal year 2015-16, the calculated cost for actual state police work on road and bridge safety was $532.8 million, far less than the $755 million allocated in the budget. This amounted to an overfunding by $222.2 million — enough, the report stated, “to resurface 1,111 lane miles of roadway or design, replace and maintain 138 bridges for the next 25 years.”

Debate continues on how to resolve this issue, but the problems remains that many small towns have done away with their local police force simply because they can't afford it. Larger towns trying to trim budgets also may not have the funds to contribute without raising taxes.

In January 2017, Pennsylvanians saw an 8-cent per gallon increase in the state gas tax, bringing the total state tax paid per gallon to 52.8 cents. State and federal taxes on a gallon of gas in Pennsylvania now total 29.5 percent — the highest in the United States.

This increase stems from the 2013 Act 89 Funding Plan, a comprehensive piece of state transportation legislation to generate money for roads and bridge projects. It was based on recommendations to modernize the transportation financing structure to generate more than $2 billion from motorist fees and taxes over 10 years.

According to PennDOT's website, “The program is possible due to legislative action in 2016 that caps the expenditures from the Motor License Fund going toward the State Police budget beginning with the 2018-19 budget and concluding with the 2027-28 budget.”

“We are doing our best to drive out the money for the roads and bridges,” Rafferty said. “We have 45,000 miles of state roads in Pennsylvania … when people talk about Ohio, New York and Maryland, I say we have more than them combined to take care of on our own. Part of Act 89 gave more money to our counties and municipalities, which allows them to catch up on some of their work from resurfacing to bridge replacement. The rapid bridge program has been going very well. The big stumbling block we had with that was DDP and their review of permits. We have actually had meeting with PennDOT and DDP. I'm working on legislation that would require DDP to have third party reviews. They don't have it right now.”

The DVAED's next meeting will be Dec. 7, when it will gather for the association's annual Christmas party at the Blue Bell Inn in Blue Bell, Pa.