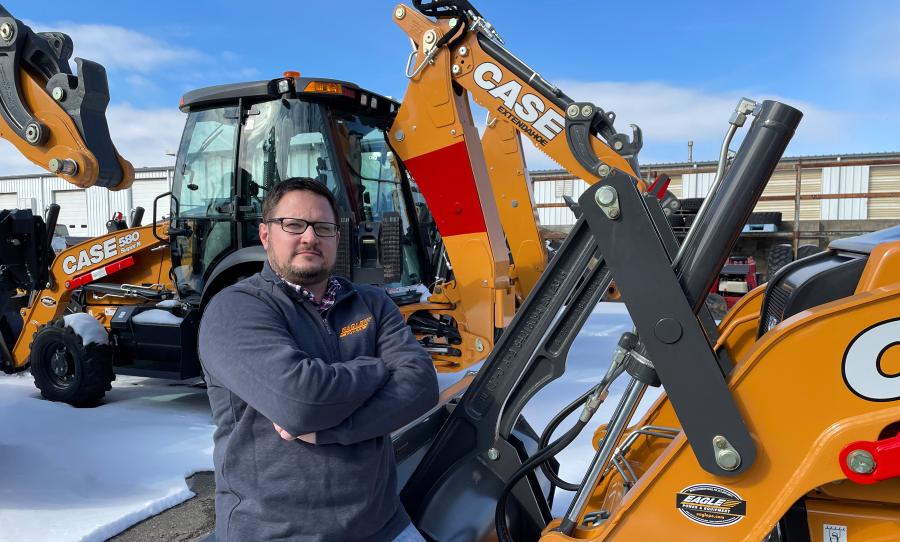 Mike Lutz is a sales representative, primarily for Case and Kubota, in Montgomery County and northern Bucks County.

Mike Lutz knew he had an exciting job opportunity in front of him a year ago when he came aboard at Eagle Power & Equipment Inc., an equipment dealer in eastern Pennsylvania and Delaware.

Not only was he joining a well-respected company known for developing close relationships with customers, but he was hired to be a Pennsylvania sales representative, primarily for Case and Kubota, in Montgomery County and northern Bucks County.

Lutz had built an outstanding resume working in the industry for other firms in the region and he was a slam-dunk hire for the dealership.

Before coming to Eagle Power, he had spent the previous six years in the crane industry in New Jersey and New York for JK Crane, a small rental company, building an expertise in working one-on-one with contractors, company owners and municipalities.

Selling Case and Kubota products is obviously different from what he was doing before, but many of the customer service skills he developed before joining Eagle Power have applied nicely in his current position.

"What I did at JK Crane and what I had done previously in the construction rental and sales business totals up to more than 15 years now," he said. "The customer interaction on construction sites and in offices now is like what I have been doing for a long time. Obviously, it is different equipment, but the customer base is similar. I have a lot of customers that use both dirt equipment and aerial equipment in cranes, so there is a lot of overlap."

Although his talent for selling to customers is obvious to those with whom he works, Lutz recently happened to be in the right place at the right time in making a sale when Franconia Township came in to buy a Case 621G wheel loader to replace an earlier model that the municipality had bought back in the 1990s from Frank Beck, Eagle Power's current key account manager for Montgomery County.

"When you are dealing with municipalities, you work with people that truly love what they are doing and do what is in the best interest of their township," Lutz said. "Paul Nice, the superintendent of highways for the township, had been telling Eagle Power for years that they were going to upgrade their wheel loader. It just so happened that Franconia was able to do so the year that I took over.

"They really wanted to replace a machine that had 1996 technology with a 2020 model — two very different pieces," he said. "But something like that is often a long process with municipalities, and when they have the money to spend, they will do so. It worked out perfectly."

Lutz said Franconia is using the Case 621G wheel loader this winter for loading out salt, but it is handy working on a variety of other loading projects throughout the year. In addition, he said, the Case makes loading materials much simpler.

The 621G's optional, fully integrated payload system improves load accuracy and provides detailed real-time reporting for billing, tracking and operational performance. It helps prevent under- and over-loading of trucks, and ultimately results in faster cycle times with less hassle and wear and tear over time.

The reputations of Case and Kubota, as well as their equipment's operability on the job, give a nice assist to Lutz when customers come calling.

"The history of Case in the construction market really speaks for itself," he said. "The backhoes, excavators and wheel loaders it manufactures have been such a proven workhorse in the industry, and their reputations absolutely help.

"In terms of Kubota, it is newer to the market, but its popularity has grown exponentially in this area in terms of what customers want. The quality of the Kubota machine, and its price point, has really made it among the best. The market share on a lot of Kubota's equipment is growing, too, and its excavators are phenomenal."

Even though Case and Kubota construction equipment are his main responsibilities, Lutz also handles a roster of smaller ancillary attachments for the larger machines.

"Rammer Hammer is a big line that we sell, one of several third-party manufacturers of attachments," he said. "Virnig is also an important line, and Blue Diamond attachments is another that we have been getting involved with. It is a smaller company that seems to be particularly good at what it does."

Two of the other attachment and coupler makers Eagle offers, Lutz said, are Werk-Brau and Strickland, each of which he sells through the construction end of the dealership.

Lutz Has Much to Keep Him Busy

He said there have not been any challenges for him at Eagle Power in his first year there but keeping up with the ever-changing lines of equipment offered by the dealership is a learning process.

He also works hard to develop new contacts while maintaining the old ones that past representatives had when they worked the same sales region.

"Eagle Power has a rich history of relationships with a lot of customers in this area, so my job is taking hold and building on those contacts in my territory," Lutz said. "I also need to continue cold calling a lot of the smaller companies out there to grow the territory. There are many owner-operator customers that we deal with every day — the small construction companies and landscapers — that are a big part of my business."

Lutz reflected on his first weeks at Eagle Power and the responsibility of taking over such a critical sales territory.

"When you're in sales, the day-to-day concerns of each customer don't wait until you feel comfortable in your new position," he said. "You have to jump right in and handle what is coming your way on day one. That said, I don't know of a better way to start building that trust with your customers than getting that first answer they need." CEG