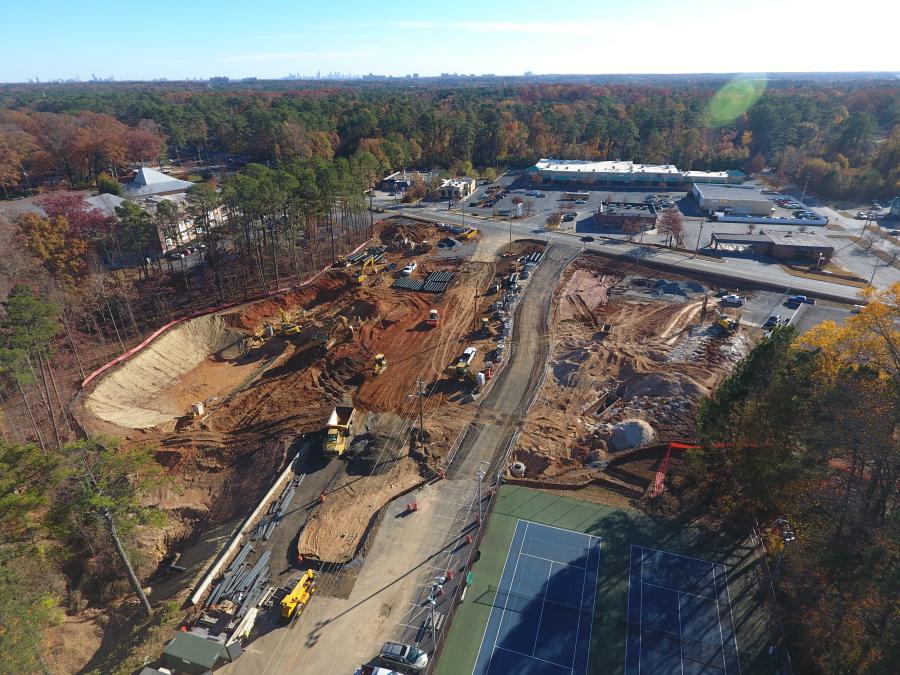 Batson-Cook Company photo After a half-century in the same location, Georgia’s East Marietta library is moving to a new home

After a half-century in the same location, Georgia's East Marietta library is moving to a new home. The East Marietta Library and Cultural Center, a joint-use project of the library and Cobb County P.A.R.K.S., is expected to open in early winter 2018.

“The community and the library system have been looking forward to this day for a very long time,” said Helen Poyer, director, Cobb County Public Library System. “We are extremely excited about the new East Marietta Library and Cultural Center. The library will incorporate traditional services with innovative services, such as creative space in which our patrons can create 3D objects, music, videos and digital photography.

“It will house a black box theater and have space for art exhibits,” said Poyer. “The new library will provide dedicated space for children, teens and adults. It will be a state-of-the-art library that will be a destination not only for the residents of east Cobb, but all of Cobb County.”

The new facility has a projected cost of just under $11 million. The project is being funded through the 2016 Special Purpose Local Option Sales Tax (SPLOST) and the Georgia Board of Regents. A total of $8.6 million will come from the SPLOST program. An additional $1 million is being provided by Cobb County PARKS to realign the connector road to Sewell Park.

Batson-Cook Company was chosen as the general contractor for the new building, which brings its fair share of challenges.

“We anticipated a complex site from the beginning,” said Jonathan Collard, Batson-Cook project manager. “We have to keep the existing library open, maintain access to Sewell Park, re-route traffic multiple times for the different phases and have encountered rock.”

Work on the facility began in late 2016, and should near completion by the end of the year. Recently, crews have been focused on grading efforts, as well as underground utilities, cast in place retaining walls, backfilling and prepping the building pad. Key tasks yet to be performed include pouring the slab on grade and erecting the structure.

Structural steel, brick masonry and membrane roofing are among the main materials that will be used during construction. Bulldozers, excavators, off-road dump trucks, backhoes, mini-excavators and skid steers are required for grading and underground utilities. Crews also have used a milling machine for road relocations, along with drilling equipment for blasting rock.

Colllard said site work and finishes will be the most time-consuming part of the work, due to all the phasing and rock removal. Colder temperatures could also be an issue during the winter months, with weather always a concern for crews on site.

“We had our first rain, after a long drought, right when we began footing excavations,” said Collard.

Despite the obstacles, crews are pleased to be building a structure that will serve generations to come.

“It's intended to be a community hub for the surrounding area, with programs and features for all ages. The new East Marietta Library will be a state-of-the-art facility, with much more to offer than a typical library.”

The Cobb County Public Library System is a 16-branch system headquartered in Marietta, serving more than 700,000 people. Located in one of Georgia's fastest-growing counties, the system is a significant resource center in the community, providing equal access to information, materials and services. The current East Marietta Library is the seventh busiest in the Cobb County system, with roughly 55,000 patrons visiting the library each year.

The East Marietta Library is situated in the densely populated area of East Cobb. It serves a community of single-family dwellings, as well as a number of apartment complexes, schools, churches, and businesses.

The current library is located on Lower Roswell Road and near the intersection of South Ga. Hwy. 120 Loop, or Lower Marietta Loop.

The library is adjacent to Sewell Park, a popular Cobb County recreational complex, and is located across from a strip mall. There are no traffic lights on Lower Roswell at either of the two entrances, causing some difficulty in entering and exiting the library. The building has ample parking; however, the surface is in need of repaving. Because of inadequate signage, people are often unaware of the library's presence.

The existing, outdated structure is a cinder block building, 8,600 sq. ft. (798 sq m) on two floors. Children's services and a multipurpose room are located on the bottom floor, with adult services on the top. There is no elevator, only a narrow staircase connecting the two floors. There is a long handicapped ramp to the top floor. There are no full walls defining rooms on either floor, and there are only partial wall partitions between offices, services and a multipurpose room.

The library currently has space for just over a dozen public computers, with about 40 readers' seats. There are 57,346 library materials in the collection. Restrooms on the lower floor are ADA accessible, but all need upgrading. There have also been continual plumbing problems over the years. In addition, the size of the facility is simply too small to serve the community.

CAS Architecture serves as the design team for the new facility, which many feel is long overdue.

“We see architecture as an endless process of reinvention and reshaping, responding to our changing world. The modern library adopts this same sentiment.”

The creative team was committed to embracing the landscape by not just designing a building, but also a site where the building will blend into the park. Creating a facility that provides a unique landmark generating community pride and identity was important, along with establishing a plan with intuitive circulation, a centrally positioned and highly visible service desk and multiple environments for a wide variety of users.

“We wanted to incorporate state-of-the-art technology, while forecasting future trends and building in flexible systems for multi-use functions, and also recognize the benefits of sustainable design practices and create a design with thoughtful solutions throughout,” said Smith.

Smith said the site proved to be the biggest challenge.

“A requirement of the project was that the old library, as well as the adjacent park, had to remain in operation throughout the duration of construction. Being a small site, the design had to be squeezed between a tennis court and a stream with a wide buffer. The team overcame the restrictions by developing a linear floor plan organized by a central axis.”

Smith said the cultural center includes a 300-seat amphitheatre, a 180-seat black box theater, art gallery, café and classrooms for both 2-D art and sculpture. The amphitheater will host local musicians, movie nights and a multitude of local groups, while the black box theater will be home to a local theatrical company.

“The facility will provide opportunities for children and adults alike,” said Smith.

Smith noted that his firm specialized in libraries, bringing valuable experience to the project.

“While designing this library we had three other libraries in design,” said Smith. “We find this to be an advantage, because we can share the latest thoughts on what services other libraries are providing to their patrons in different locations.”

The structure is a single-level steel frame building with metal stud infill , along with modest brick and concrete details.

“Part of the design philosophy was this 'passing through' to the landscape. On a previous library, we had begun thinking about how we could see through a column. We developed for East Marietta a column made of two steel channels situated back-to-back, with a three -inch space between them. Careful consideration was given to the placement of the required columns bridging, so it would not interfere with the view of someone through the column. The double channel columns were placed along the central axis,” said Smith.

Upon entering the site, a patron follows a 2-ft. wide demarcation on the ground that changes from river stone up onto a concrete bench that passes through the front entry glazing, down to a stripe on the concrete gallery floor, up onto a concierge desk, back down onto the gallery floor and into the library through a glass window and down to where it is articulated by a strip of carpet. The double channel columns are situated along this line providing someone with an unobstructed view from one end of the building to the other.

Being mindful of the environment was another consideration.

“We are committed to sustainability. We feel it is our responsibility to incorporate sustainable practices into our work whenever possible, and we encourage our clients to adopt this sentiment for their projects. The building was oriented to take advantage of daylight harvesting. Energy efficient HVAC systems were used, as well as low flow plumbing fixtures and LED lighting. Portions of the floor incorporate raised flooring, so the interiors can be easily and economically reconfigured to respond to the patrons'changing needs,” said Smith.

“Today's public libraries are unique community work spaces that serve an increasingly sophisticated consumer. As with all our libraries, our hope is the library will be an oasis for its community, a place where both mind and spirit will be renewed. We hope the design presents warm, inviting spaces for people to work, congregate, collaborate and share experiences while building community.”

Once the new structure is completed and all books and materials have been transferred, plans call for the existing library to be demolished. The transition comes not a moment too soon for those closest to the project.

“East Marietta will be transformed into a 'knowledge library' for discovery and 21st-century skills development. This will be a unique facility – a destination for all of Cobb County,” said Poyer. —CEG