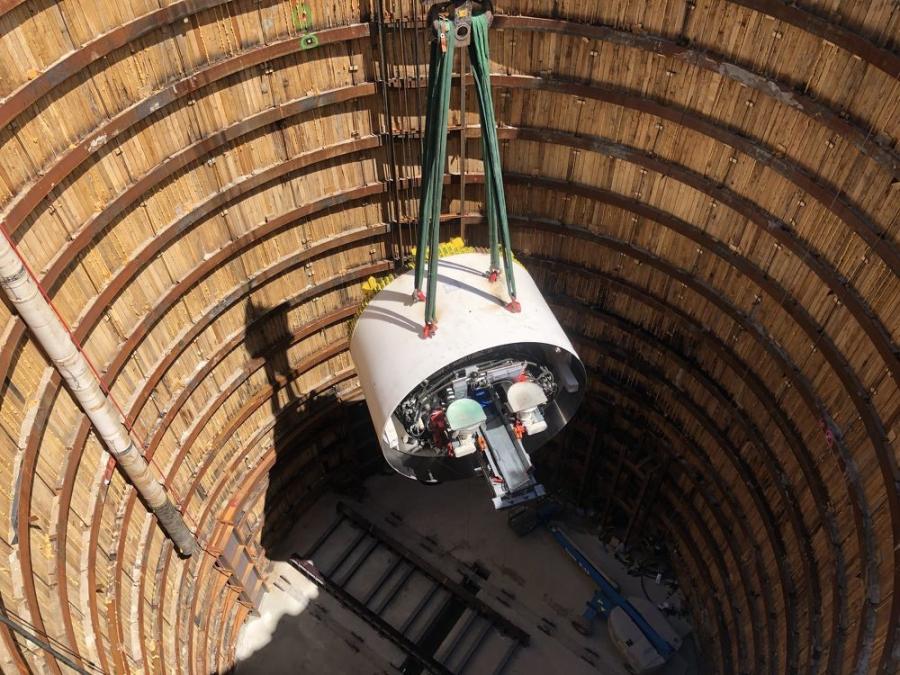 The tunnel is scheduled for completion in mid 2023, with the entire modernization project set to be finished in fall 2023.

An innovative $162 million tunnel boring project is well under way with construction crews mining the tunnel as others work to attach the remainder of a 400-ft. long train. 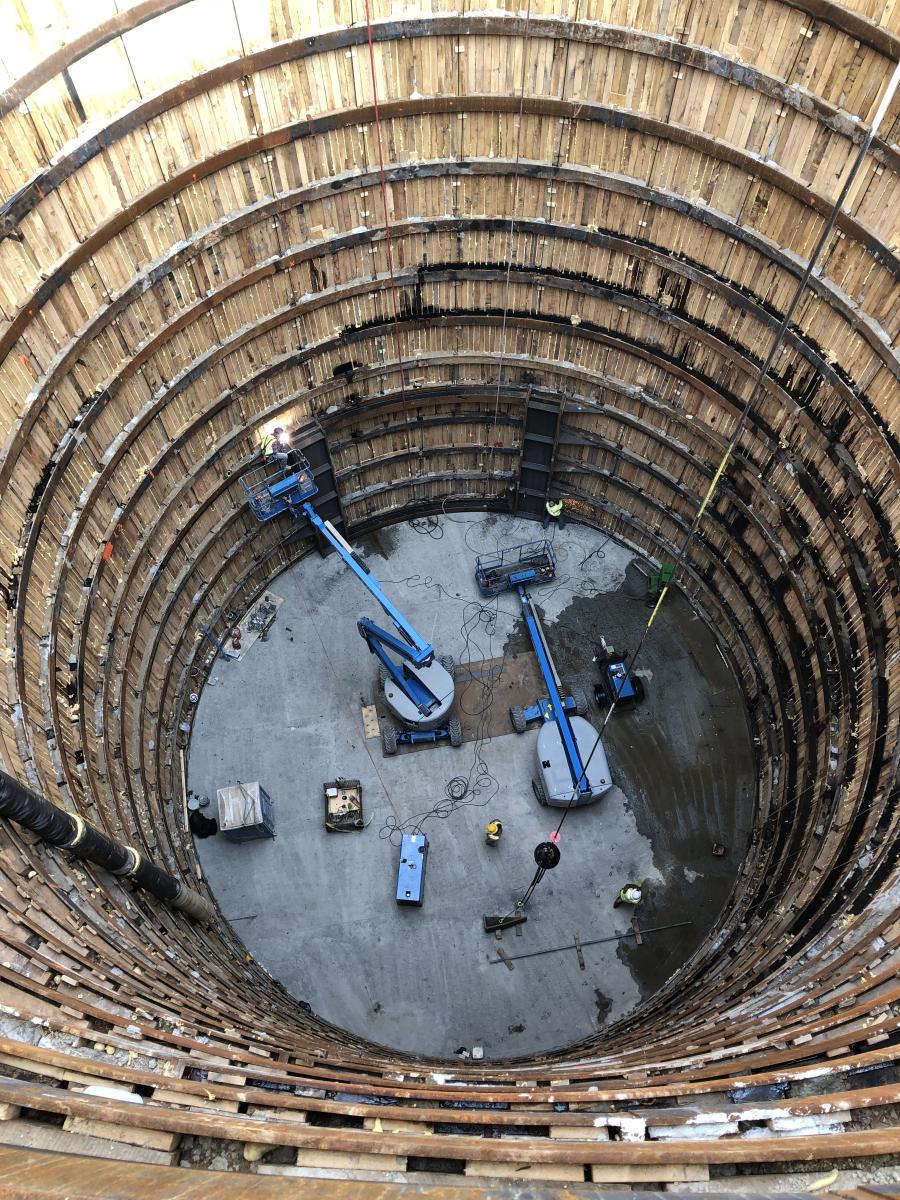 I-75 is the most heavily used commuter route in Oakland County, which is part of the Detroit metropolitan area. It sees 174,000 vehicles daily and is a gateway to tourist destinations in the north, and the largest north-south freeway in Michigan.

Excavation of the tunnel boring machine (TBM) launch shaft began in December 2019. The shaft is approximately 60 ft. in diameter and 100 ft. deep and is located midway along the tunnel alignment. Mining by Jay-Dee Constructors started in July 2020. The TBM, dubbed Eliza, was fabricated in Germany and arrived at the project site in March and April 2020. The full TBM is approximately 400 ft. long and is made up of the front shield section that includes the cutterhead; a bridge section between the front shield and the gantries; and nine gantries supporting systems for operation of the TBM. Initially the TBM was assembled on the surface next to the launch shaft and connected to the front shield section by "umbilical cords" supplying electricity, hydraulics, data and ventilation. As mining progresses, the full train of the TBM will be lowered into the hole.

"In a sense, the drainage tunnel being created by the TBM really provides two major benefits," said Robert Morosi, MDOT spokesman. "It prevents future freeway flooding and protects the community storm and sanitary system from becoming overwhelmed during major rain events. The overall modernization project is 18 miles long and it's only a 4-mile section that is below the surface street level. So, there are 14 miles of freeway that are traditional, at-grade ditch draining with lanes pitched so the water drains to the sides."

The current freeway drainage system has seven pump stations to provide drainage for the freeway. This project will replace them with just one.

"This will be incredibly modern in that we will be able to control the discharge rate," Morosi said. "It drains the freeway for drivers, but more importantly it protects the local community because to be able to control the discharge rate we're not having the drainage facility compromised. Essentially, you get a heavy rainstorm, the combined storm water for the community is going into the drain and the tunnel has the capacity to hold up to 20 million gallons of water so it will allow the drainage facility to drain the community first before it will drain the freeway water. There was an August 2014 incident that was the proverbial 100-year storm. Not only did the freeway flood, but the local communities, houses and businesses had major flood damage based on the fact that the drainage system couldn't handle the water."

The TBM is 100 ft. below the northbound service drive of the freeway and will take about three years to excavate and fabricate the 4-mi., 14.5-ft. diameter tunnel. Work on the tunnel began at the halfway mark, at the I-75/I-696 interchange between the 8-mi. and 12-mi. roads, where crews are mining to the north. Once those 2 mi. are complete, the TBM will be taken out of the shaft site, transported to I-696, reinserted and will mine the 2 mi. south.

"The TBM is equipped with a conveyor belt that will move the excavated soil from the front of the machine to the muck discharge point at gantry six. The excavated soil will then be loaded in muck boxes at this discharge location and transported through the tunnel by a locomotive. Once the train arrives in the shaft, the muck boxes will be lifted one at a time by the crane and dumped in the muck bin on the surface."

A fleet of 18 to 24 dump trucks subcontracted from Dan's Trucking line up during the day to remove the excavated soil — estimated to be approximately 154,000 cu. yd. — to a rural site. 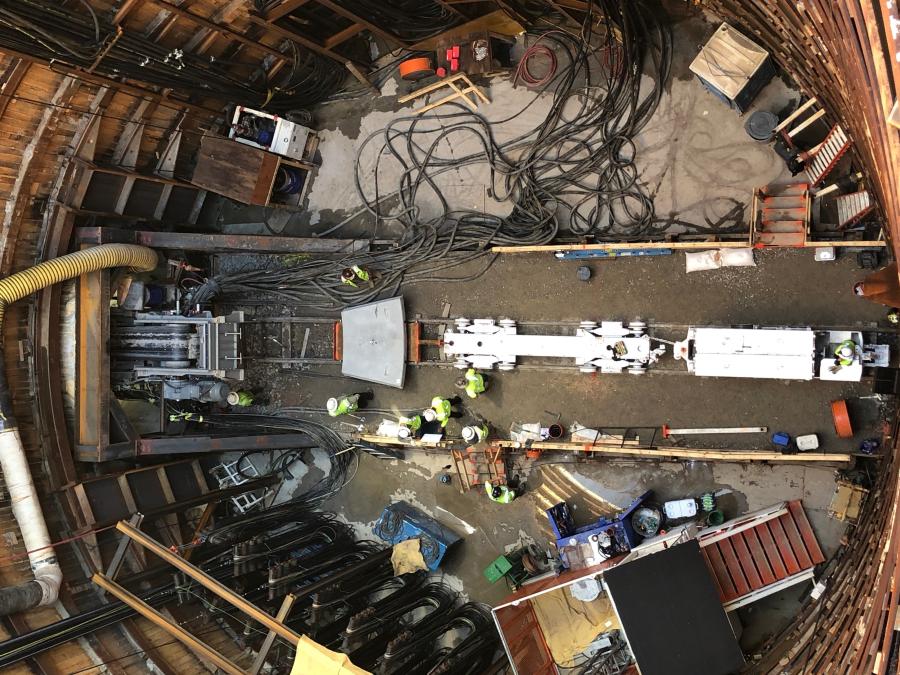 Work on the modernization project has been ongoing for several years with Segment 1 finished in 2017. Walsh Construction Co. and Toebe Construction LLC were awarded the contract for the $224 million Segment 2. Segment 3, a $1.4 billion contract, went to Oakland Corridor Partners.

The project has called for creative thinking and financing, which in turn allowed MDOT to reduce the originally projected nine segments spanning 18 years to three segments spanning about eight. That was made possible when MDOT teamed with Oakland Corridor Partners, comprised of a group of contractors and equity partners.

"The Oakland Corridor Partners is putting the money up front and it is reimbursed through the 30-year contract," Morosi said. "Five years are design and construction, and the last 25 are maintenance. The profit is driven by performance. It receives availability payments over the 30-year time frame. Looking at it from an economic standpoint, if you built it right originally, there's a lot of upfront money. Look at the remaining 25 years, if there is minimal maintenance to do that's your profit margin."

The tunnel is scheduled for completion in mid 2023, with the entire modernization project set to be finished in fall 2023.

Unlike most heavy equipment, tunnel boring machines tend to be assigned names. There was "Bertha," built for the Alaskan Way Viaduct replacement tunnel project in Seattle, and "Bumblebee," used on the Louisville, Ky., Waterway Protection Project.

And now, there's Eliza in Michigan. The name was chosen after the developer on the project posted a number of names and asked the community to vote. Eliza, for Eliza Leggett, won.

When slavery ended, she turned her attention towards the Suffrage Movement and in the 1870s cofounded a young woman's home association for young working women of Detroit. She is a very important member of our history and one that doesn't have a large national presence. Eliza was very influential in her day." CEG