End in Sight On 12-Mile Road Repair Project in Minnesota 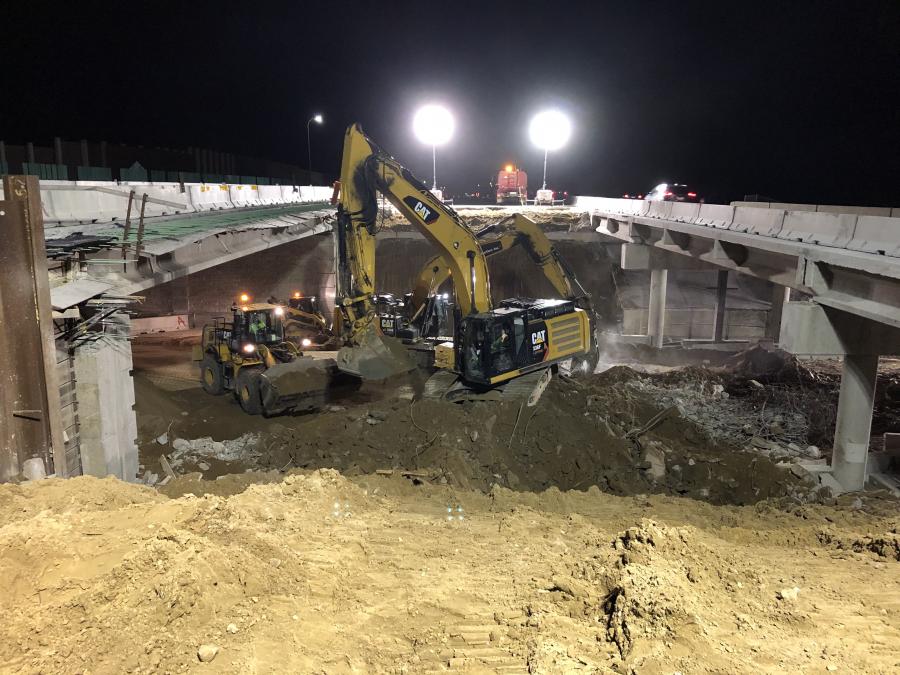 Five bridges carrying traffic over local city arterials were demolished and reconstructed and a sixth was repaired as part of the I-35W road improvements. (Ames Construction photo)

Construction crews are well on their way to rejuvenate and bring new energy to an aging stretch of interstate highway running north out of Minneapolis. 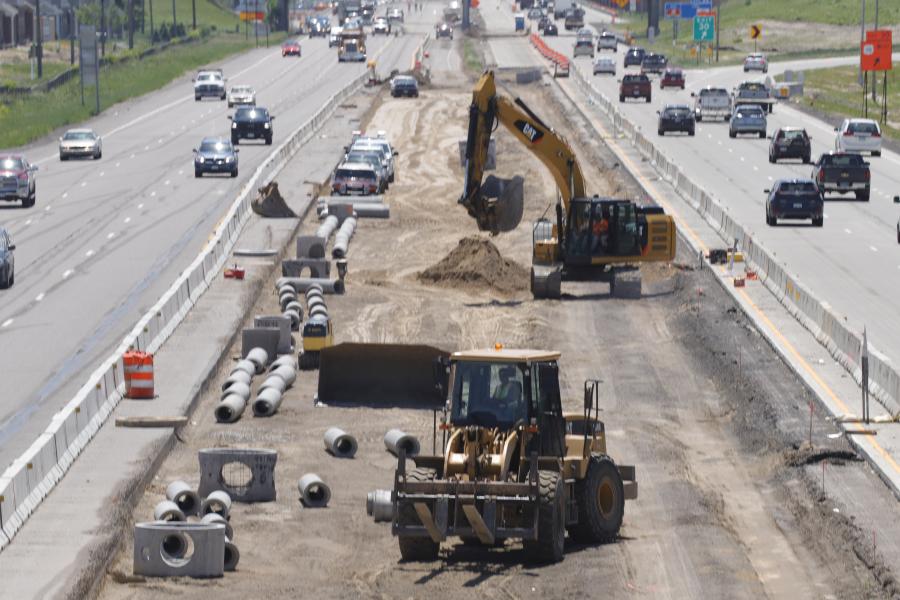 Clearing and grubbing operations for this 12-mi. project to replace deteriorating pavement and ease congestion began in the spring of 2019. Though a mid-April snow storm may have stalled crews, it did not stop them. With an ambitious schedule in hand, highway crews wasted no time moving into the bone-jarring operations of concrete and asphalt removal through this stretch of the road.

The Minnesota Department of Transportation (MnDOT) awarded the $208 million contract to Ames Construction. Based in Burnsville, Minn., the company started out as a family-run, local earthwork contractor in 1961. Since then, the company has grown to a full-service heavy industrial and civil contractor working throughout North America.

PCI Construction, of Burnsville, Minn., is performing the concrete work while Bituminous Roadways, based in St. Paul, is placing the asphalt. Ames crews are handling all the earthwork operations.

Before the project kicked off, the existing geometric conditions along this corridor included two to four traffic lanes in each direction; 13 interchanges; a scattering of auxiliary exit lanes; and varying shoulder widths.

According to the MnDOT website, this section of the I-35W corridor is a major radial freeway corridor connecting greater Minnesota and a half dozen northern suburbs to its downtown business and entertainment district.

Construction is taking place between the freeway's connection to County Road C and several local arterial streets in the city of Roseville at the south end, and County Road 53 at the north end of the project, near the small community of Lino Lakes. Major east-west highways connect to this stretch of freeway including TH-36 and I-694; which carry high traffic volumes.

Morning and evening rush hour traffic congestion and delays are becoming increasingly worse as the northern metropolitan communities continue to grow. Aggravating the delays, the metropolitan area transit system runs its express busses primarily on the shoulders of the freeway, taking up valuable space on the narrow shoulders and forcing slow-downs in the adjacent traffic lane. 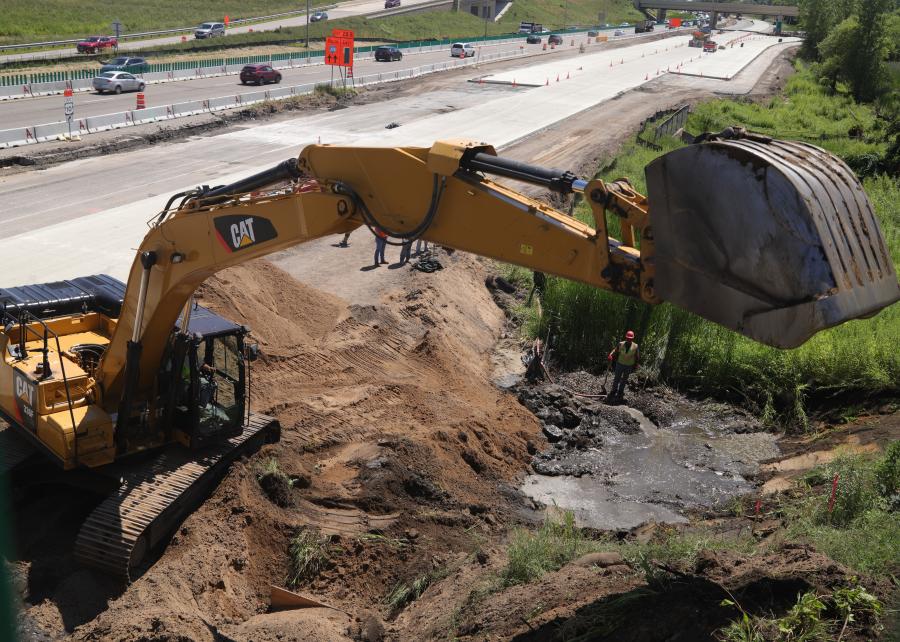 When crews pick up and leave the site in November 2021, daily commuters and travelers will have more lane space and a transit lane to take advantage of.

Paving crews will pour an unbonded concrete overlay on top of the existing traffic lanes through this 12-mi. stretch of the mainline freeway and all its connecting ramps. A MnPASS transit lane in each direction will be constructed in the existing median for express busses and carpoolers.

Wrapping into the pavement improvements near a set of railroad tracks is the replacement of four bridges at the freeway's busy connection to the city arterials at the south end of the project. A fifth bridge will be reconstructed near the north end of the project and another will undergo a rehabilitation.

To reduce highway noise filtering into nearby neighborhoods, seven separate noise walls for a total length of 4.1 mi. will be erected.

An estimated 226,000 cu. yds. of concrete will have been poured and 59,700 tons of asphalt placed for the new MnPASS lanes when work closes this year.

Earthwork operations are huge on this project. During the last two years excavator operators have been busy excavating and back filling miles of new storm sewer placement. When completed, new storm sewer pipes will tally up to more than 9 mi. in length, including more than 500 catch basins and 10 ponding areas. All storm sewer upgrades are designed to handle 100-year flood events.

To date, workers have logged more than 300,000 man hours and anticipate 100,000 more this season. On peak working days, there are an estimated 150 workers on site, said Rob Gullikson, Ames project manager. 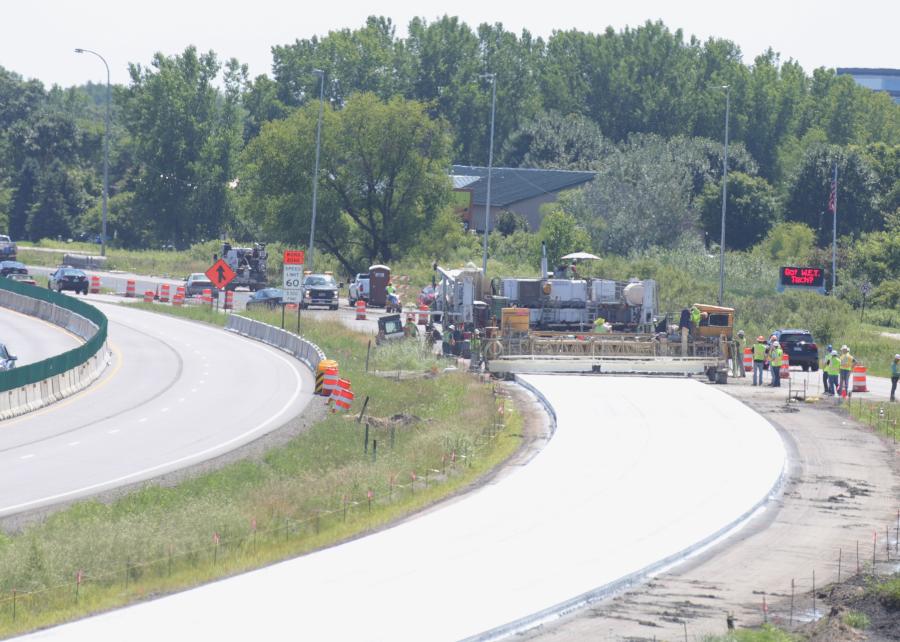 During peak summer construction, Ames Construction mobilized approximately 50 pieces of its own equipment for this project, primarily Cat dozers, excavators, rollers and Manitowoc cranes. On average, 30 dump trucks and trailers move in and out of the site on a daily basis. The company relies on Ziegler CAT equipment rental to fill in any equipment voids.

This project has been on MnDOT's target list for 20 years. After years of traffic, environmental and design studies, the preliminary design contract began in 2014 to select a preferred alternative, complete the environmental documentation and calculate a detailed cost estimate resulting in a final contract in May 2016, said Jerome Adams, MnDOT pre-design engineer.

Many of the new bridges and traffic lanes are in the final stages of reconstruction and crews are shooting to open the new MnPASS lanes this September. This year, reconstruction of the north bound outside lanes will continue as well as the bridges over Rosegate Street and County Road C.

"The project has been a success in the first two years. All milestones to date have been achieved and portions of the project were concluded in the second year, although they were not initially scheduled for completion until the third year.

"There have been continual adjustments to the schedule to overcome certain changes or delays, but overall, the project team is excited about completion this year," Gullikson noted.

The construction is occurring under heavy traffic conditions and require a complex ramp and traffic lane shift and road closure schedule.

There have been more than 300 field design changes to date on this project.

"Some of these required prompt evaluation and incorporation to maintain hourly schedule updates and adjustments. An overlay project, as opposed to a full reconstruction, the project can be compared to a home remodel where many details are not uncovered until work has started and require immediate collaboration with Ames, MnDOT and other contractors," Gullikson said.

On the administrative side, "keeping the public up to date on traffic switches and navigating through the project is always an ongoing and fluid process," said Dan Penn, MnDOT project engineer.

The miles of storm sewer installation presented its own coordination challenge. 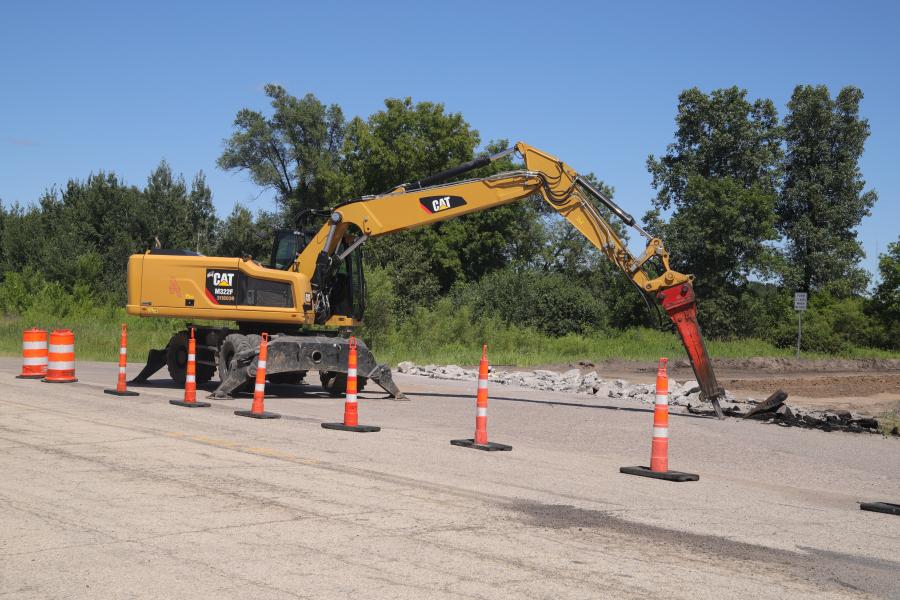 All bridge demolitions have been completed with new bridge construction continuing to take place. Working to the advantage of bridge workers, traffic engineering and the traveling public, none of these bridges spanned the freeway itself so a complex and time-consuming traffic control adjustment to close the freeway along with an inconvenient weekend highway detour was not needed.

"Demos were completed in thirds dictated by the overall traffic staging for all five bridge locations. Ames bridge workers worked around the clock from Friday evenings to early Monday mornings and completed all within the allowable time" Gullickson said.

There is a notable high voltage line at the Rosegate bridge location that was identified early and considered in the bridge abutment and beam pick plan design.

"Minimum clearance requirements on these lines made it difficult to drive pile with standard equipment so the contractor had to use a different piledriver hammer. Crews used a hydraulic hammer instead of the normal diesel hammer," Penn said. "The hydraulic hammer is shorter and the piling had to be driven in 10-foot welded sections to avoid the power lines. It was very slow and most of the time it took a lot longer to finish driving pile along the north abutment and middle pier."

In spite of some inclement weather delays, Ames Construction and sub-contractor crews are on schedule to complete all phases of this road rebuild and will open I-35W by November, Gullikson said. CEG