Oregonians eagerly await the chance to drive the new stretch of road. 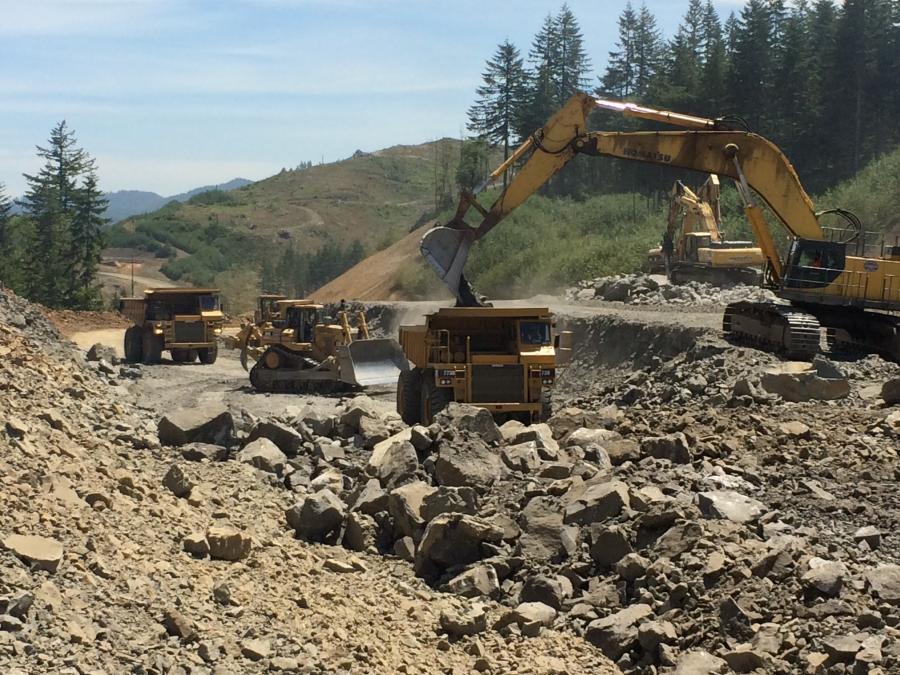 Part 3 of a 3-part series: As a 10-year project to straighten 10 mi. (16 km) of narrow, curving dangerous highway through the Oregon Coast Range nears completion, Oregonians eagerly await the chance to drive the new stretch of road. But for the Oregon Department of Transportation, environmental mitigation work on the project will continue for another decade.

“Pioneer Mountain-Eddyville is an immense project with an impact to the environment in forms of streams, riparian areas and fish and wildlife,” said Jerry Wolcott, ODOT project leader.

“When we are done, we will have totally mitigated 5.5 acres of inundated habitat and 23 acres of riparian. We will create new channels and enhance stream channels of 14,000 linear feet and then set aside 84 acres of riparian — including the creation of 23 acres, as well as purchasing property and setting it aside so it can't be developed.

We're also purchasing 52 acres of prime headwaters and riparian of the Yaquina River and transferring that to the U.S. Forest Service so it can't be developed. We've already completed quite a bit, including removing culverts blocking fish passage, creating wetlands, installing large woody debris. But as part of the conditions of the permit we have to monitor some of these areas for 10 years.”

The project to straighten U.S. Highway 20 has been ongoing since 2004 and plagued with all sorts of problems, including ancient landmines that, unknown to ODOT, were still moving. Six years ago, engineers discovered newly built bridges were out of plumb, and the decision was made to blast the bridges and begin anew.

The new segment of the highway is expected to open in the fall. Meanwhile, work to mitigate the environmental impacts is ongoing. While it is one large body of work, Wolcott has broken it into phases to make it less unwieldly, though there remain plenty of challenges.

“Phase 5 is a 2-year project,” Wolcott said. “There are two fairly good sized mitigation areas and three smaller sized. The permit required that we create 3.4 acres of wetland, create 1,200 feet of stream and plant on at least 4,500 feet of a 50-foot riparian buffer. The specifics are that we have to take three acres of water features that are below the ordinary highway. Of those, .15 acres have to be inundated at the summer lows and then 1.85 of stream terrace has to be inundated between 12 and 18 inches at the winter base flow, and three acres have to be inundated at ordinary high water elevation. All this was to create refuge for fish, critters and bugs at summer time lows, winter base and summer high flows, too.”

The project was engineered by Otak, which gathered data for a year and used it to create the design, which Wolcott describes as “basically braided channels at different grades.” Engineers considered data for the hydraulics, soil conditions, channel stability and sediment transport so it didn't silt up.

“That was half of the project,” Wolcott said. “We also have to plant it in such a way that restores the native plants and helps to support the new channels. We have four different schemes for planting, stream bank planting, willow depressions, upland patches and upland seeding. The stream bank is willows. The willow depressions are planted in a little pocket that provides plant and habitat diversity, same with upland patches. It slowly moves away from high density planting to more of the seeds.

“The last piece is the installation of large woody debris. We've collected a lot of trees from the very beginning and hung on to them for a long period of time and will place them along the streams to provide habitat for the fish.”

ODOT plans to let the bid for that phase this month (April), but already knows just the type of contractor it needs.

“The contractor that bids on this is going to be challenged with pretty fine-tuned grading and I think the one that is most creative and most efficient at that will probably be the best suited,” Wolcott said.

Another phase involves erosion control, using an innovative approach that calls for planting grasses that grow quickly, but are non-native, such as rye grass. Along with the rye grass, they'll plant native seeds for lupine, alder, Douglas fir and cedar. Those will grow up and shade out the grass, allowing ODOT to return in about three years to plant more native plants.

While the environmental mitigation work continues, for the most part, the biggest challenges of the $300 plus million project have been met and conquered.

“It's like the baby is almost ready to be delivered,” said Wolcott. “I'm sure the project will define the careers of many people. It's going to be a sweet ride. Smooth and safe and uneventful. That is [the] way you want to get to the coast, uneventfully.”