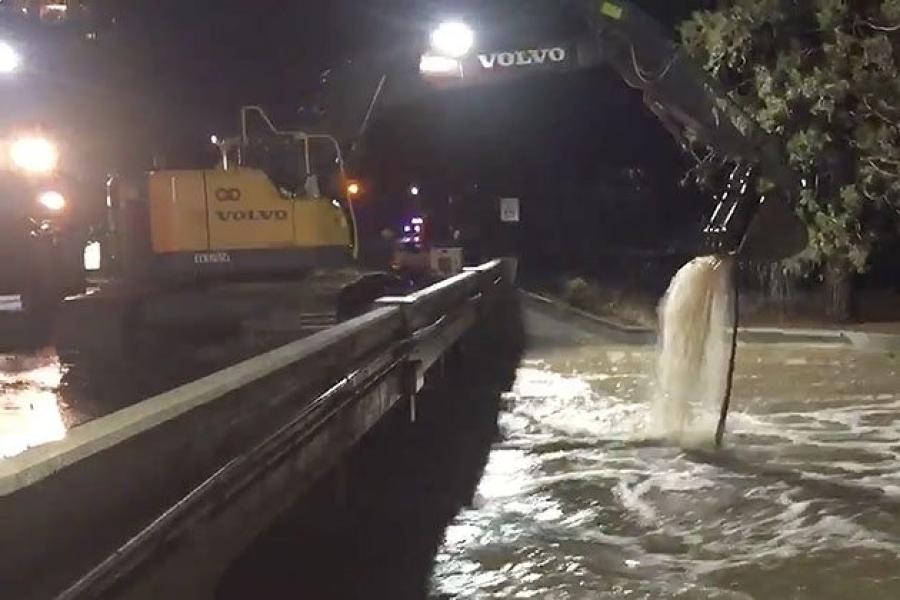 A team of heavy-machine operators drew a crowd of camera-toting spectators as they plucked downed trees and other dangerous debris from raging floodwaters in Nevada.

The men then became internet sensations when video of their exploits spread online, with commenters dubbing them #CraneGuy, Bridge Ninjas and heroes of downtown Reno.

Emergency workers voluntarily evacuated about 1,300 people from 400 homes in a Reno neighborhood last weekend as the Truckee River overflowed and drainage ditches backed up.

Three-man teams set up an excavator, loader and dump truck on multiple bridges and started snatching huge logs and debris from the rushing river.

"It's like playing a video game," he said. Still, "it's a challenge every day."

Officials said the men served as a first line of defense, preventing junk from piling up and putting extra strain on aging bridges.

They worked for about 20 hours on three separate shifts.

The downtown Reno bridge teams said the task was no different than their everyday work with large construction equipment — digging holes and building things while avoiding pipes and wires.

Craig Madole, chief executive of the Nevada Associated General Contractors, dispatched 70 companies, their employees and equipment to areas most in need of help. He said it was easier to ask for assistance from private companies than to manage tons of expensive government equipment and people. The organization was created after the 1997 flood to assist government agencies with emergencies.

The crew also did pretty well a couple of days later, winning $1,350 for charity as they grabbed stuffed animals from a glass booth during a claw-game tournament fundraiser hosted by a Reno casino. -AP