The subterranean construction project has unearthed a trove of archaeological finds that provides a look at eight thousand years of the city's history. 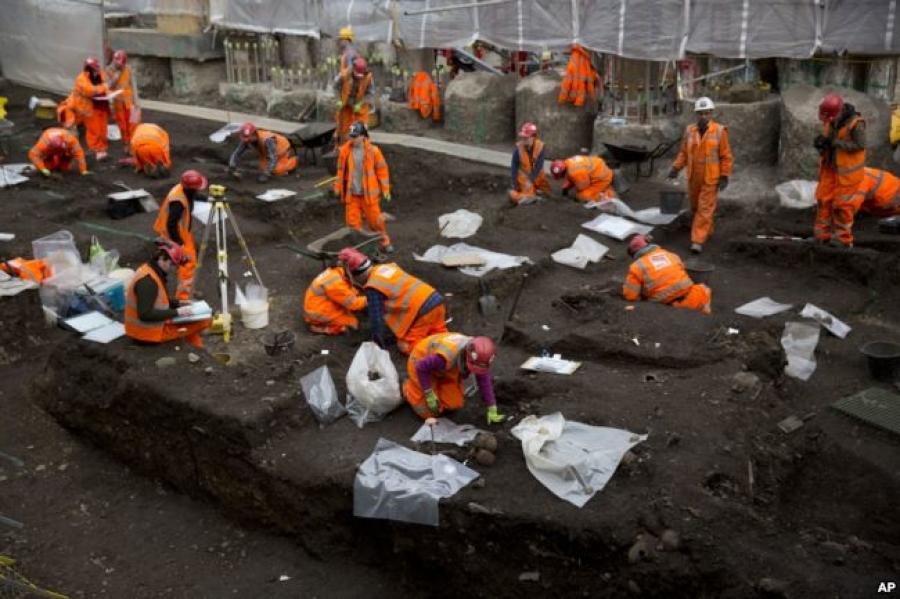 The biggest construction project in Europe is taking place beneath the British capital, London.

The largely subterranean Crossrail route linking Heathrow airport to the eastern financial district and beyond is designed to ease congestion as London's population grows; but, it has also unearthed a trove of archaeological finds that provide a fascinating window on eight thousand years of the city's history.

“The great thing about the Crossrail project is that it's allowed us to basically sort of take a slice through London. We've been amazed at the quantity, tens of thousands of artifacts,” said Jackie Keily, curator of "The Archaeology of Crossrail" exhibition at the Museum of London – itself housed in a 200-year-old shipping warehouse in the old docks next to the River Thames.

Among the highlights is a bronze medallion dating from the year 245 AD, when southern Britain was ruled by the Romans.

“It would have been given by the emperor to a high-ranking official, probably in Rome. And it's quite fascinating that it's traveled right across the Empire to be here in London,” Keily said.

Nearby, a glass case contains a dozen carefully worked metal discs. These "hipposandals" were an early form of horse shoe designed to aid pack animals as they negotiated the rain-soaked streets of Roman London.

Many of the finds hint at macabre rituals. Hundreds of skulls were found beneath what is now the financial heart of London. Could the victims have been executed and put on display as a warning? Were they the losers of gladiatorial battles at the nearby Roman amphitheater?

One of the most striking exhibits is the decapitated skeleton of a Roman woman found buried beneath what is now Liverpool Street station. The skull is placed between the leg bones.

“To have placed the head between the legs one feels was almost certainly sending some sort of message, either about the person or was some kind of ritual associated with the burial,” Keily said.

The Crossrail route tunnels through several graveyards, many dating to major disease outbreaks such as the "Black Death" in the mid-1300s. That plague pandemic wiped out much of London's population and killed an estimated 1.5 million people across Britain.

Despite the panic that swept across Europe at the time, archaeologists have noted that burials appear to have been conducted with as much dignity as possible. There are few mass graves and most burial sites were dug in an orderly fashion. Some held up to 20,000 bodies.

Lighter aspects of London life are also on display: a bowling ball found in the moat of a 16th century manor house, perhaps lost beneath the murky water during a high society summer party. Laws prevented lower class peasants from partaking in such revelry.

A collection of leather shoes has survived five centuries buried in the London mud. Some are plain with rounded toes, patched up and well worn. Others appear to have barely been used, their tapering ends suggestive of the modern stiletto heel.

“So very fashionable shoes that Londoners were wearing. It connects us in a way with people in the past,” Keily noted.

Despite the painstaking archaeological work each time something new is unearthed, construction of Crossrail remains on schedule. The first trains are due to take passengers through the tunnels in late 2018.