Excavating the Slopes of Park City, Utah, With Hitachi 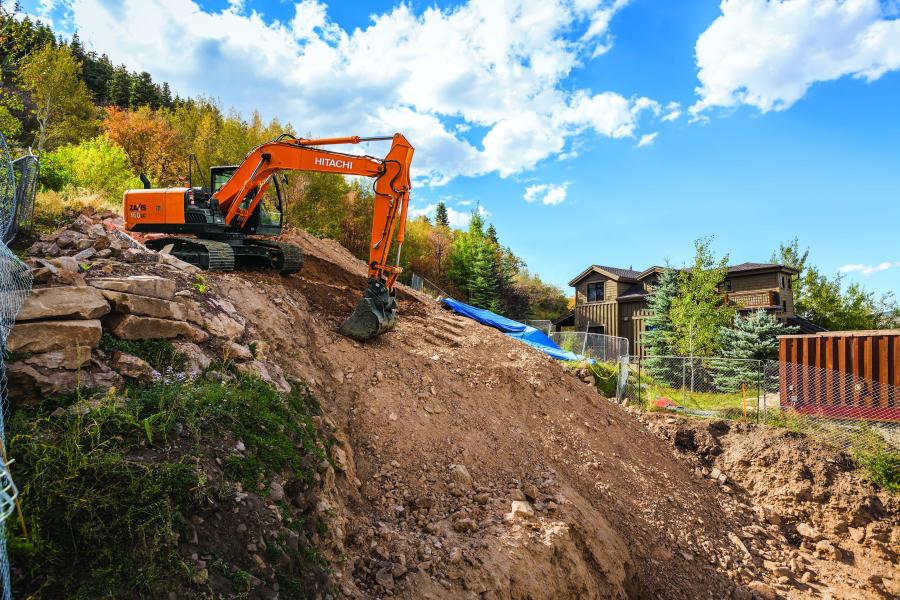 Whether it's tunneling under historic homes, working on a trophy home in a private community or repairing a broken line in the middle of the night, John Whiteley is the go-to guy in Park City, Utah. And generally, he'll be on site with a Hitachi excavator in 30 minutes.

Whiteley initially moved to Park City for the ski experience.

“I love Park City so much,” he said. “I came here at 18 years old originally just to be a ski bum. I had no idea at the time that this town would become what it is today.”

Whiteley's ski bum dreams eventually transformed into an excavation company with about 18 employees. He started digging in 1979 and is now the owner/operator of J.W.W. Excavating, which he started in 1986.

J.W.W. Excavating does a variety of work, including serving as the emergency contact for the Park City Municipal Corporation and the sewer district. However, the majority of the company's work takes place right where Whiteley lives: Old Town, the Historic District. While the building façades and homes are postcard perfect, the work is rough and tough.

“I tend to do difficult, tight excavations,” he said. “We have historic homes that are on 25-foot-by-75-foot lots with 3-foot to 5-foot offsets, so you're in tight conditions and digging extremely close to the next property. We do a lot of tunneling work where we have to leave the house in place; you can't move them because they're historic. We put them on cribs, hollow them out and drop them down on new foundations.”

It sounds like a nightmare for some contractors, but Whiteley enjoys the challenge.

“I used other brands of equipment when I first started,” he said. “I found Hitachi a little bit by accident because of my salesman.”

Whiteley uses the EX80-5 primarily for repair work and backfilling in tight spaces. The ZX160LC-3 and ZX160LC-5 excavators do a ton of digging, and the ZX200LC excavators and ZX210LC-5 stay busy on subdivision work. Whiteley admits at first he wasn't quite sure what use he would get out of the mini-excavators. Now he can't imagine his fleet without them.

“The mini-excavators are so versatile,” he said. “They do such a nice job especially for low impact when you're working off city highways and sidewalks, and repairing waters and sewers. They're irreplaceable.”

Living in a mountain town and ski resort area comes with steep, rocky terrain that Whiteley deals with daily. But his Hitachi fleet continues to power through.

“The kind of digging I do is very steep, and the hills around where we work are really hard and rocky,” he said. “You couldn't put more wear and tear on Hitachis than I put on them. They are so tough and reliable. I'm a firm believer in Hitachi.”

Whiteley doesn't lease equipment; he buys it and needs it to last. And Hitachi continues to exceed his expectations for reliability and durability.

“I rate equipment by how many days of work I get out of it,” he said. “And I need a machine that's going to carry me down the road, so longevity is the key. And I'm telling you, these Hitachis are tough as nails. They give me no problems.”

Uptime is especially important to Whiteley since his work is seasonal. So he's pretty picky when it comes to working with dealers.

“I've dealt with the other guys, and they'll give me one reason or another of why I won't be working the next day,” he said. “That's upsetting to me because I have a season here. I have nine months to race to dig the most holes, and I need to work every day.”

“Honnen Equipment and Kelly Doyle run the tightest, best maintenance shop I've ever seen,” he said. “Kelly tells me a price and sticks to it. Anything he fixes stays fixed. He'll send a guy out whenever I need him, and I'm up working the next day. I can't tell you how important that is to me.”

For a guy that's been digging more than 30 years, Whiteley still looks forward to his work every day.

“Every hole I do is different and exciting,” he said. “When you get a house 14 feet up on jacks and you're tunneling under it, it's quite exciting. It looks dangerous, but I'm used to it and it doesn't seem dangerous to me at all.”

You can expect Whiteley will continue to build his legacy while working hard — and skiing hard — in the city he loves so much.

“I had no idea that Park City would carry me all the way through my life,” he said. “I'm not the guy that punches the numbers at night. I just go as fast as I can, I'm local and well-connected. I'd say after 30 years of digging, 90 percent of my work is within a 3-mile radius of my house. I love it and couldn't wish for anything better.”

(This story was republished with permission from Hitachi Breakout Magazine, Fall 2016 Issue.)