The project for R. Sluis Excavating came out of left field seven years ago. 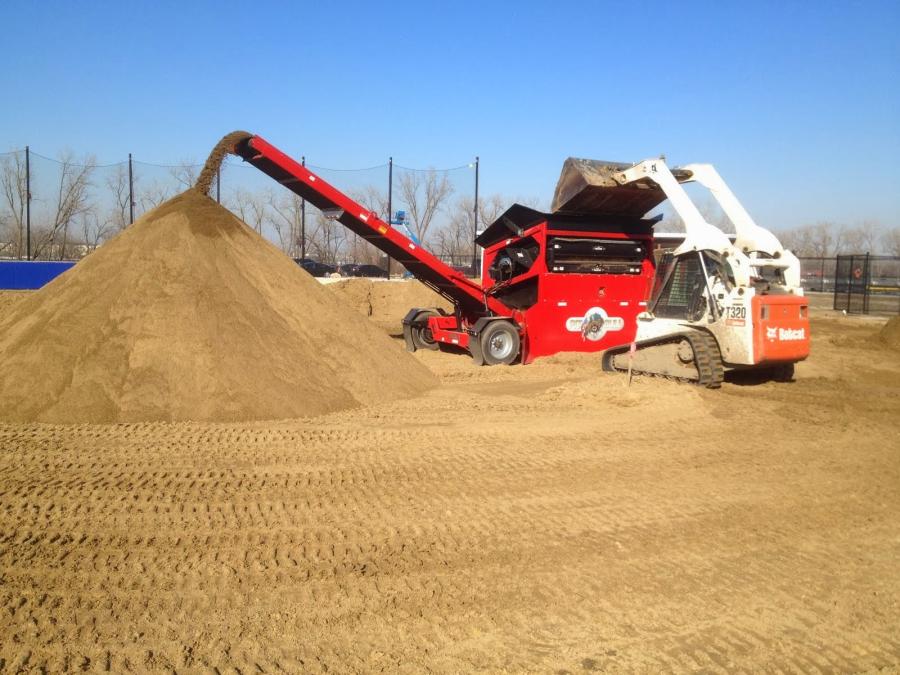 The Pitbull 2300 was a major player in the project.

The project for R. Sluis Excavating came out of left field seven years ago. For over 30 years, the Oak Forest, Ill., company focused on commercial and residential excavating; so developing an 87-acre sports complex was something new.

The opportunity surfaced in late 2009 when Marv Aardema of Don Mar Enterprises, the primary contractor, called Steve Sluis for help in developing Trinity Christian College's new athletics fields half a mile from campus.

The complex included a driving range, two softball diamonds, one baseball field and three soccer fields. It would be named after George and June Schaaf, who contributed a significant portion of the funding.

The development was possible because of a 100-year lease with the Metropolitan Water Reclamation District of Greater Chicago, which owns the narrow piece of property. A canal had been dug along the premises over 100 years earlier, and the property had been unexploited for decades. Don Mar Enterprises had been attempting to do the majority of groundwork for nearly three years, but Aardema needed some help. He decided to hire a professional excavation subcontractor.

R. Sluis Excavating dispatch in and around Chicago to offer specialty excavation services for anyone with the right job. But this project was different, both in terms of scope and the capabilities required. It would push his company's expertise, Sluis knew, but he wasn't about to drop the ball; his team was up for the challenge.

There was one big catch. Fresh, sorted, high-quality dirt, sand and other materials were not in the budget. The project's planners believed costs could be cut, and profits made, by collecting waste materials from area contractors, landscapers and homeowners who paid to discard them at the job site. From asphalt grindings and clay fill to black dirt and stone, about 100 people per day paid to drop material by the load.

Sluis recognized he would be doing 90 percent of the site work. This was one of the biggest projects in the company's history.

“It was a great job for us,” he said, “but we needed to look into some additional equipment.”

A small screener would make the job for R. Sluis Excavating. Sluis researched several screeners and began testing a few brands and models. Sluis discovered Lake Erie Portable Screeners. The company appeared to have an ideal screening plant — the Pitbull 2300 — for the work.

“The Pitbull blew right through the dirt we were sorting that day,” Sluis said. “When screening black dirt, I could get up to 80 yards per hour. The other units we tried produced about a quarter of that, maybe less.”

The Pitbull 2300 was a major player in the project, even more than Sluis expected. He and his sons used it to separate everything from very fine topsoil to larger stone for building the roads and parking lots. He also used it for creating an asphalt mixture, as well as blending sand and clay for the baseball infield. In addition, he used the Pitbull to blend the topsoil for all of the grass fields.

In terms of keeping the project's price tag in check, the Pitbull 2300 was the MVP; Sluis said it paid for itself many times over. Although processing and sorting the material on site took time and was paired with operating costs, having the Pitbull was a much more affordable and convenient option than purchasing materials outright.

Take, for example, the complex's grass soccer fields. Sluis estimated his company used roughly 4,300 cu. yds. (3,287.5 cu m) of topsoil for the two fields. If the company had purchased pre-screened black dirt at the average rate of $20 per yard, the total cost would have been $86,000, or $43,000 per field. Instead, the project gained money with each load that was dropped. In addition, the monetary impact multiplied with more expensive material, like the baseball mix that cost an average of $60 per yard or stone that cost $18 per ton.

“It's kind of like double dipping,” Sluis said. “We were paid to take the materials rather than paying to have it trucked in. It was cost-effective and resourceful.”

The Pitbull 2300 is small and easy to maneuver, and is built with high-quality structural tube steel that reduces vibration and makes the machine less susceptible to cracks that are common with C-channel construction. Sluis appreciated the machine's size, durability and capabilities for several reasons. For one, he was continually amazed by the fuel efficiency of the 47-horsepower Yanmar diesel engine, which he calculated at a little over a gallon per hour.

Sluis also liked the height of the 20-ft. (6 m) stacking conveyor, which can be hydraulically elevated up to 13 ft. (3.9 m) for feeding directly into a truck or creating larger stockpiles. This meant his crew could stack more in one pile — up to 80 yards of material — and work longer before having to move.

The project was a breakaway success for R. Sluis Excavating. The crew learned a lot about screening a range of topsoil materials, and Sluis found the right equipment for building his team. He's confident the company's new skills, combined with the Pitbull 2300, will lead to new opportunities in the future.

In the meantime, Sluis said work on the complex wrapped up in late 2014. George Schaaf said it would be done the day he watches one of his grandkids on the field. Either way, for the athletes who tread on R. Sluis Excavating's work, the new fields will be a sanctuary for blood, sweat and tears for years to come.