The post-recession construction industry has spurred a number of success stories — one of which is BP Construction Group of Tampa Bay, Fla. 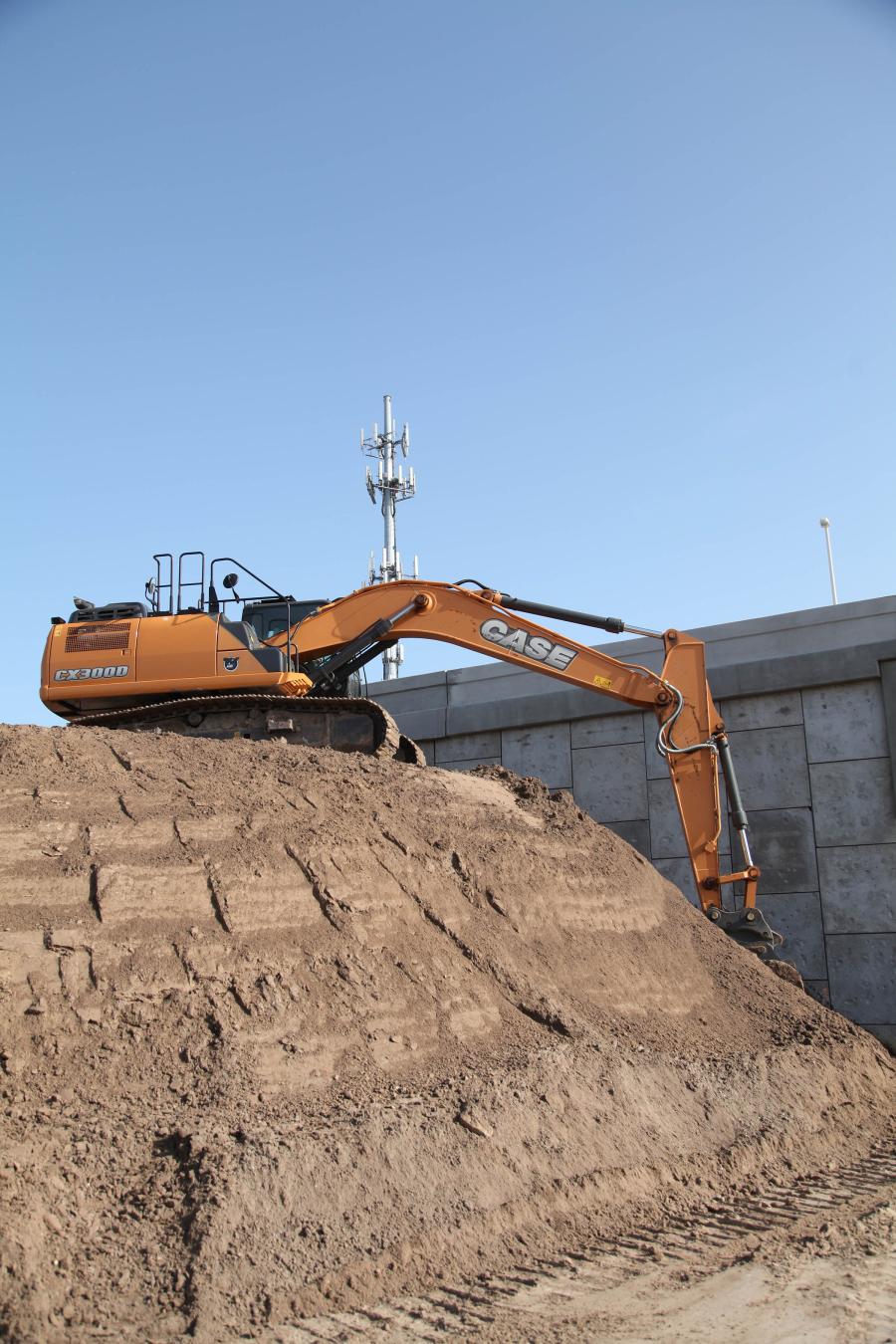 BP Construction Group recently added two new Case CX470C excavators to its fleet from Trekker Tractor and Randy Lane, salesman, and put the new Case CX300D to work out on the interstate.

The post-recession construction industry has spurred a number of success stories — one of which is BP Construction Group of Tampa Bay, Fla. Three-and-a-half years ago, R.G. Stathas and his cousin, Nick DiGiulio, started the company with one machine. They ran a single excavator out of Bridal Path Pit in nearby Lutz, which spawned the name “BP”.

Today, the company has more than 60 pieces of equipment, 40 employees and business revenue that topped $20 million last year. The company credits its success to the resurgence of the construction industry, existing relationships, a reputation of honesty and integrity — and hard work.

“I like to work hard,” said Stathas. “I instill that in my guys. We put in long hours and we get it done.”

The company is currently working five Interstate projects and four smaller projects. One of the biggest projects the company is working on is the I-275 highway widening project in Tampa Bay. BP Construction Group recently added two new Case CX470C excavators to its fleet from Trekker Tractor and Randy Lane, salesman, and put the new Case CX300D to work out on the interstate. Stathas and his crew noticed fuel efficiencies up to 20 percent better than other equipment. They also identified smooth and fast hydraulics, and a spacious cab with strong environmental controls and visibility as benefits.

On the I-275 project, BP Construction is completing median work, hauling in dirt, completing finish grades and ramps and hauling out excess material. The company is providing nearly 2 million cu. yds. (1.5 million cu m) of fill dirt to the project out of its Bridal Path Pit and other area pits, and they're moving much of that material themselves.

“We have, on site, cut and balanced probably somewhere around 300,000 yards [of dirt] so far, and we probably have another 100,000 yards of material to move,” Stathas said.

One of the first things Stathas noticed about the CX300D was the precision of the machine. Along with the proven Case intelligent hydraulic system, it features a new larger hydraulic control valve, more sensors and an electronically controlled pump that all help improve the speed and responsiveness of the excavator's movements.

“It's really important to have smooth operations because, a lot of times, you might be doing something where you have to be within an inch,” he said. “If you have a jerky machine, it makes it much harder on the operator to cut a smooth grade. The less handwork you have to do, or the less work you have to clean up with a dozer, the better. The [CX300D's] smoothness is just outstanding.”

With as many hours as the company puts on a machine over the course of a day, fuel efficiency has a big effect on the bottom line. BP Construction Group has noticed greater fuel efficiency compared to other models.

“We're quite impressed with the fuel efficiency,” Stathas said. “I believe that [with the CX300D] we're using about 15 or 20 percent less than our current equipment that we use now.”

“The benefit of this machine not regenerating is you don't lose that time. You're not adding hours on your equipment,” said Stathas. “Everytime it doesn't sit there and regenerate for five or 10 minutes, you're not burning your diesel. That's a major plus.”

The company's operators are working on an interstate median between live traffic and other contractors and machines. It's busy, it's dirty and it's hot. Stathas appreciated the cab visibility and comfort features.

“It has clear visibility all the way around,” said Stathas. “You have a really clear view of everything that you need to see.”

The CX300D also comes standard with a rearview camera and offers optional side cameras.

“It's a great thing to have because it cuts back on damage or somebody backing into something when they can't see,” he said “Say you have a guy sitting in a cab. He can't always see what's going on behind him, so he has to swing all the way around to see what's behind him. By the time he swings all the way around, it's too late and he's already smashed into something. That's why having the cameras is definitely a plus.”

The machine's cab comfort and environmental controls also have helped keep his operators on task.

“The air conditioner is ice cold. That's a major thing in equipment,” he said. “You shouldn't have to worry about sitting in there and sweating. The humidity here [in Florida] will kill you. That air conditioning — you have to have it. You get way more production if the guys are comfortable.”

“My operators love it; it's nice, it's smooth, it's fast, it's efficient. As far as all the other different equipment that we've ran, it gives them a run for their money.”

Increasing Productivity and Efficiency Out in the Pits

Out in Bridal Path Pit, where Stathas' company got its start and the company loads upwards of 300 trucks each day, a CX470C excavator has been outpacing other models and producing gains in fuel efficiency that Stathas didn't believe at first.

“He [John Nahouse, operator] would call us and tell us the fuel savings on it, and we weren't really believing it,” said Stathas. “We went out and checked it our ourselves.”

What they found was an improvement in fuel efficiency that helps lower operating and increase uptime by eliminating mid-shift refueling.

“I can get two full, nonstop 10-hour shifts out of it,” said Nahouse. “It's got really good fuel economy. Some of the other machines I've run, you get 11 or 12 hours of digging, and then you're going to be pretty low. The thing here is, you don't ever want to get out and stop loading trucks in the middle of the day. You really need a machine you can rely on.”

“I was passing them up,” said Nahouse. “The speed of this machine overcomes the extra yard that other machine had. The speed overtook it. It's got a real good solid balance. I can side load ­ a lot of machines can't. When you reach out off of the side of your tracks [with other machines], you're going to lose your [stability]. This machine is real solid, it's real safe, and it's real operator friendly.”

Nahouse appreciates the ease of access to daily maintenance checkpoints — especially the grease points, which is critical while working in abrasive dirt and sand.

“It's very simple, as far as checking the oil and stuff. The oil levels are real easy to check, the greasing's really simple. There are a couple of main fittings on the bucket that's easy to maintain. It's very easy to maintain.”

The CX470C also comes standard with Case ProCare, the industry's most complete maintenance and heavy equipment support program. ProCare is a suite of product assurances that includes a three-year Advanced Case SiteWatch telematics subscription, a three-year/3,000-hour full-machine factory warranty, and a three-year/3,000-hour planned maintenance contract. ProCare allows business owners to invest in new equipment while helping to make owning and operating costs predictable for the first three years of lease or ownership.

“We're very excited to have the three years of ProCare — where we don't have to worry about the service of the machine or any of the maintenance or any repairs if there is any,” said Stathas. “It takes a lot off of our plate as a company, worrying about each individual piece of equipment and making sure it's serviced.”

“On a scale of 1 to 10, with 10 being the best thing I've operated, this is definitely up there,” Nahouse said. “It surprised me, it really did. It's fast, I have no issues with keeping up with trucks, it's real smooth, it's precise, it's operator-friendly, and it's comfortable. Anything an operator really needs in a machine, it definitely covers all ends of the deal.”