With the construction business rebounding around southwest Florida, Honc Destruction is well positioned to provide the answer buyers expect to hear when they ask: “How fast can you clear my property?” 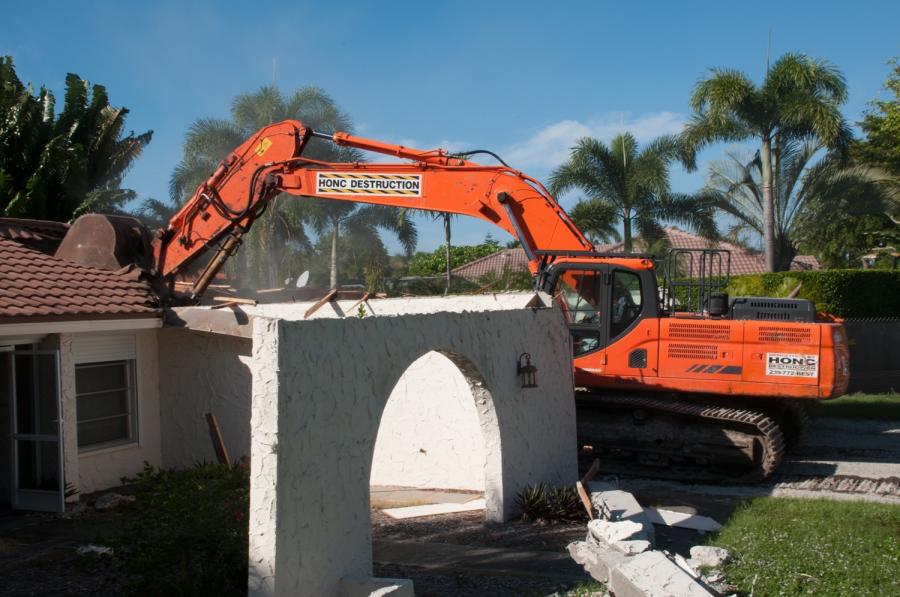 Once the Florida economy improved, Honc Destruction was right back to demolishing residential structures for people who found the wrong house on the right location.

Go back to 2002, the year the company started. At that time, Honc Marine Contracting was a successful builder of seawalls for thousands of waterfront properties, especially in the Cape Coral and Fort Myers, Fla., areas.

“Seawalls are faster and easier to replace on vacant lots, and because many owners wanted new homes anyway, we decided to add demolition services in order to enhance our seawall business,” said David Mulicka, president of Honc Destruction, experts in commercial and residential demolition. “With the ability to use the same operators and equipment already needed to build a seawall at the same time, we could offer demolition services at a price and schedule that nobody else could match.”

Fast forward to 2015, another innovation to become more productive and efficient came to fruition. The result: Honc Recycling, a centrally located six-acre construction debris transfer station site in Fort Myers. “Getting rid of the demolition debris is costly and time-consuming,” said Mulicka, “but I thought if we had our own recycling facility, our business model would take on an entirely different look. We now own a facility where we used to pay to dispose of our demolition debris.

“With the addition of top-of-the-line heavy equipment, we are now well positioned for continued growth and expansion,” he said.

In the early 2000s, the Florida economy was booming and buyers had money to purchase older residences along the water. Tearing down existing structures and building new, often larger, homes was common.

“It was a good time to get in the demolition business,” Mulicka said. “Working with the seawall company gave us a huge pricing advantage. Some customers had hardly any net costs to their project or the demolition work.”

A few years later, the Great Recession hit southwest Florida especially hard. According to a Federal Reserve report published in 2012 titled “Survey of Consumer Finance,” a significant drop in Florida housing prices contributed toward a 38.8 percent drop in median net worth between 2007 and 2010.

“We went through a very humbling downturn in the market,” Mulicka said. “Since we had the people and construction equipment to do both seawall renovation and demolition, we were able to endure.

“At the beginning of the recession, there were a lot of half-built houses,” he said. “Unsafe structures, incomplete projects and code violations caught the attention of various government agencies and, before long, we had contracts to tear down many of them. That became a good source of revenue.”

Once the Florida economy improved, Honc Destruction was right back to demolishing residential structures for people who found the wrong house on the right location. Much of the company's current business is focused on the Naples area, where there is almost no vacant property west of Highway 41.

“We now average demolishing one house every day,” Mulicka said. “Some of the homes we are tearing down in the Naples area range from 12,000 to 14,000 square feet, and are being replaced by homes that are even bigger and nicer.”

Not Lacking for Bigger Projects

The company is handling a variety of commercial and industrial demolition projects as well, contributing to its production of more than 1 million square feet of demolition projects each year. They include hospitals, schools, car dealerships, shopping malls, grocery stores, water treatment plants and all kinds of small businesses.

“Structural demolition is our bread and butter,” said Mulicka, “but at times we handle selective take-downs. We recently gutted the inside of a former Sears department store, including the interior slab, leaving only the exterior walls and the roof. The owner made it into a four-tenant building.”

On another job, the company took a 93,000 sq. ft. Charlotte County school and turned it into a vacant lot in less than three weeks. That's typical of the fast service that Honc Destruction clients want these days.

“Since we are the front of the train on any redevelopment project, everyone wants us to get in and get out so they can get started rebuilding,” Mulicka said. “Working quickly is one of our selling points. We can typically save the customer days or weeks on their schedule because we have the resources and equipment to complete a job more efficiently and safely than others in our trade.”

One of the newest resources available to the company is the recycling facility for construction debris.

“Previously we had to haul what we tore down to 10 or 15 different places within our market areas in order to try to mitigate the hauling and disposal fees,” Mulicka said. “Logistically it was difficult at times.”

At the new centrally located facility, he said the plan is to recycle more than 80 percent of the materials the demolition company previously paid to get rid of. Recycling construction debris has received more attention in recent years as companies are adopting sustainability efforts and sending less debris to sanitary landfills. Several major commodity buyers are customers of Honc Recycling, an increased source of income for the business that saves their clients' money on their projects.

“Having our own recycling facility is a significant strategic advantage that allows us to be much faster and more productive because we no longer have to slow down and process and sort debris at the demolition site,” he said. “We can load out and haul it away immediately and get the property ready for whatever is going to take place next. All the sorting is now done at our recycling facility. This vertical integration and delivery of services has dramatically changed our demolition enterprise.”

Another benefit, according to Mulicka, is having better control of the process. “With our own people working in both demolition and recycling, we set the schedule, use our own trucks to haul debris and sort material in a very organized manner. Overall, it has made it much easier for our team to manage the logistics of our business.”

Demolition is all about safely getting rid of what you are supposed to and protecting everything else, said Mulicka. “Having the right plan and the right people on the crews makes a big difference, and so does having the right equipment.”

In 2011, as the volume of work was increasing, Honc needed to rent additional excavators. Mulicka and his team decided to give the Doosan brand a try.

“We had no specific plan on renting a Doosan unit the first time that we tried one, but when I saw what that machine could do compared to other equipment we were using, I knew the next excavator I needed to purchase was a Doosan machine,” he said. “It turned out to be a very wise choice.”

The company purchased a pair of Doosan excavators in 2014, a Doosan DX300LC-3 crawler excavator and a slightly smaller DX225LC-3 crawler excavator, both equipped with severe-duty buckets, optional two-way auxiliary hydraulics and clamps from Synergy Equipment/Bobcat of Fort Myers.

“They quickly became the operators' favorites in the fleet, thanks to a winning combination of power, speed, ease of maintenance and comfort,” Mulicka said. “When I first compared the DX300LC-3 with a similar model of another brand that I already owned, my other excavator was not even close in power and speed. The brute force is superior. In fact, when I had three of my original machines working together, the DX300LC-3 outperformed the other two combined.”

Not only can the Doosan crawler excavators handle the daily demolition business, it makes sound financial sense as well, according to Mulicka.

“Both the DX300LC-3 and DX225LC-3 use about 15 to 20 percent less fuel than a similar machine of another brand,” he said. “That makes a significant impact on operating costs. Plus, the financing terms offered by Doosan are very easy to work with. Dollar for dollar, Doosan excavators are probably the best machines for the price that I have ever seen.”

The company was so impressed with the performance and reliability of its Doosan crawler excavators that it added a DX140LC-3 excavator with rubber tracks and hydraulic clamp to its fleet. “Our relationship with our sales agent, Mike Clementi, and the rest of the sales, rental and service team at Synergy Equipment, make Doosan construction equipment and Bobcat compact equipment the right machines for our business.”

With the construction business rebounding around southwest Florida, Honc Destruction is well positioned to provide the answer buyers expect to hear when they ask: “How fast can you clear my property?”