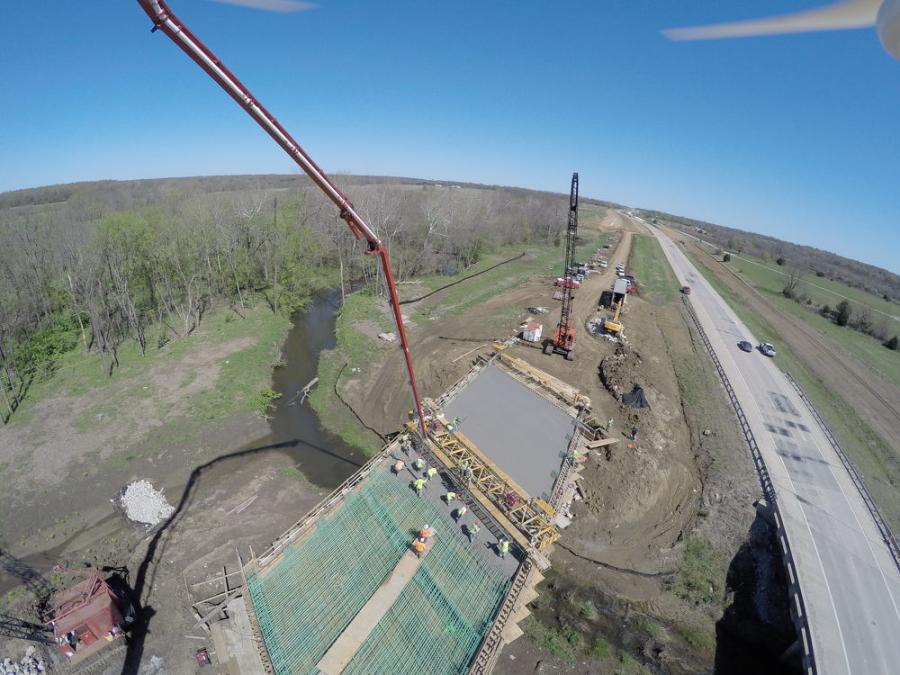 Project plans call for the building or rehabilitation of several bridges.

Work began on March 13, 2017 on the $20.4 million Kansas Department of Transportation (KDOT) project expanding a 6-mi. section of U.S. 69 to a four-lane upgradable expressway in Bourbon County, as well as rebuilding or refurbishing several bridges.

The work, funded under the T-Works transportation program, was awarded to Koss Construction Co. Inc. The closest cities to the project are Garland and Fort Scott. U.S. 69 is scheduled to reopen to unrestricted traffic Dec. 21, with permanent striping and seeding items to be installed by April 12.

"The contractor has submitted a request to extend these dates," said Darrin Petrowsky, KDOT Iola area engineer. "KDOT is still in the process of reviewing this request."

The expansion begins at the Crawford-Bourbon county line and extends north to the divided four-lane pavement south of Fort Scott. Two lanes are being added to the existing U.S. 69 alignment, and at-grade intersections are being constructed at Arrowhead, Birch, Cavalry, Deer, and Fern roads. 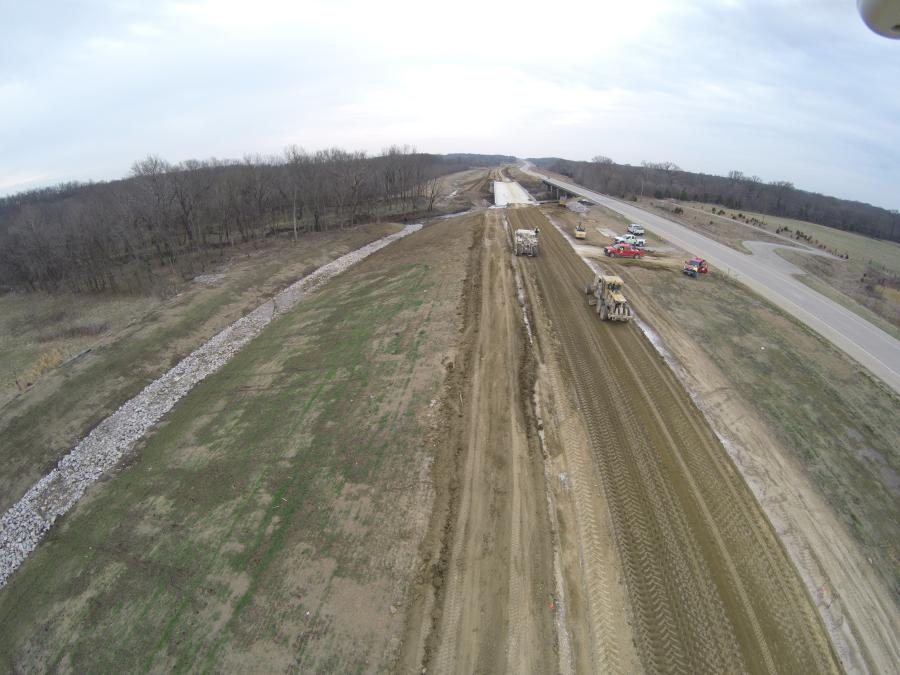 "Under the previous two transportation programs passed by the Kansas Legislature, KDOT had been able to complete the expansion of U.S. 69 from two lanes to a four-lane corridor from Kansas City to just north of Fort Scott," Petrowsky said. "These expansion projects were built to freeway design standards. Prior to the passage of the T-Works program, KDOT held public meetings to get feedback from our citizens and local partners. When the Southeast Kansas meeting was held, a well-organized contingent of local citizens provided strong support for the KDOT to continue the expansion of the U.S. 69 corridor further south, with an ultimate goal of tying into I-44.

"A second group of citizens brought forth the fact that Pittsburg State University is the only state college that currently does not have a four-lane highway to it," he added. "That showed the growing numbers of the students they are getting from the Kansas City area, and provided strong support to get the section of U.S. 69 to be at least four lanes to Pittsburg to improve safety for the students traveling back and forth from the Kansas City area."

Planning for the project began in 2009 with a preliminary survey, followed, over the years, by various studies and public meetings. KDOT also was provided with funding to address safety issues that were considered into the final design.

The section of road being expanded underwent renovation in 1998, and average daily traffic in 2016 was 8,460 vehicles. The new road, designated an expressway, will be able to handle 11,340 vehicles per day, meeting traffic demands until 2036.

KDOT's Steve Bass and Mark Hurt were the lead engineers of the project during the design phase. KDOT awarded the design of the project to TranSystems Corporation, which subcontracted the bridge design portion to Cook Flatt and Strobel Engineers.

The construction plans and a future set of plans for the final freeway configuration with interchanges at Eagle Road in Bourbon County and 710th and 680th avenues in Crawford County were developed in conjunction with each other. 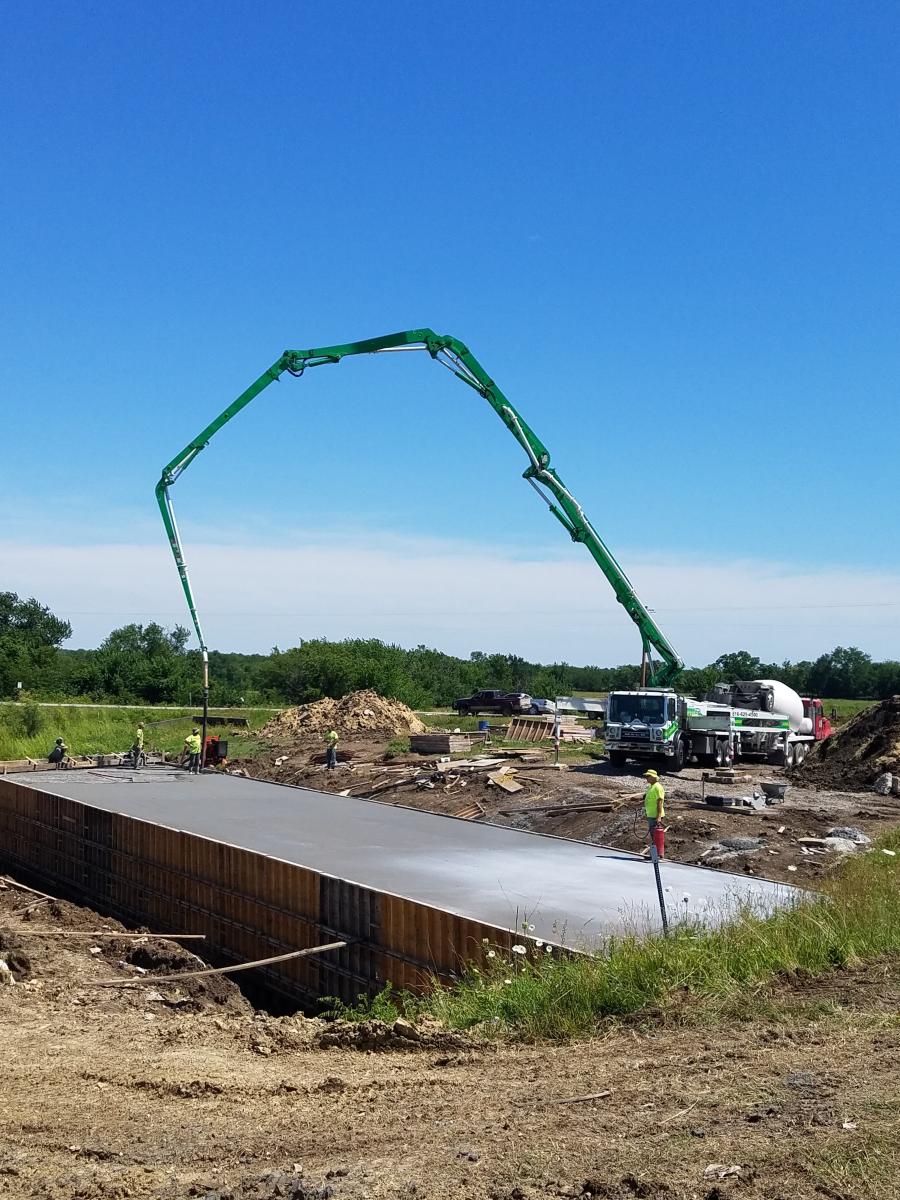 "KDOT was only provided so much money to move forward with construction," said Petrowsky. "It was a challenge for our designers to determine what parts of the ultimate freeway to build under this upgradeable project and still be within the allowed construction money."

Another challenge was to determine the access points for adjacent landowners along the corridor.

"Under the upgradable definition, KDOT modified our expressway standards of typically allowing access points every quarter mile to limit them to approximately every half mile, with the understanding that when the full freeway standards are achieved, all direct access to the U.S. 69 corridor will be limited to the interchanges only," Petrowsky said. "Initially the project was designed to be constructed as one project. As KDOT's cash flow kept shifting, the decision was made to break it into two separate projects divided at the Bourbon-Crawford county line."

KDOT's materials department has been upgrading its specifications requirements on the aggregates to address freeze-thaw properties as new testing procedures are developed.

Under the initial phase of construction, KDOT utilized the existing two lanes of U.S. 69 and kept the speed limit through the construction zone at the original posted one.

"When the contractor switched traffic from the existing U.S. 69 lane to the separate sections of the new two lanes that had been constructed and started to utilize the temporary crossovers, KDOT's area office decided to reduce U.S. 69 traffic to a post-55 mph for the entire six mile stretch, with a possibility of reducing it to 45 mph at the crossovers," Petrowsky said. "An actual field review will be conducted prior to making this decision."

"Clearing, grubbing and grading will resume after Koss Construction completes the traffic switches necessary to complete this project," said Petrowsky. "Afterwards, Koss will mobilize in with their lime treatment crew, followed by the Portland cement-treated base crew and the paving crew to complete the placement of concrete pavement. Then the grading contractor will start the final grading operations."

Most of the actual construction challenges encountered thus far have been typical ones encountered on similar projects, although there have been some soil condition issues.

"Actual field conditions did not meet the design plan," said Petrowsky. "The plans indicated soil excavation, and crews hit rock instead. We also encountered sections of the old roadway which were not indicated in the plan or taken into account in the earth work. This caused us to add additional contractor-furnished material to the project as we were not able to utilize the material from the old roadway in the shallow fill areas we had, where it was encountered. 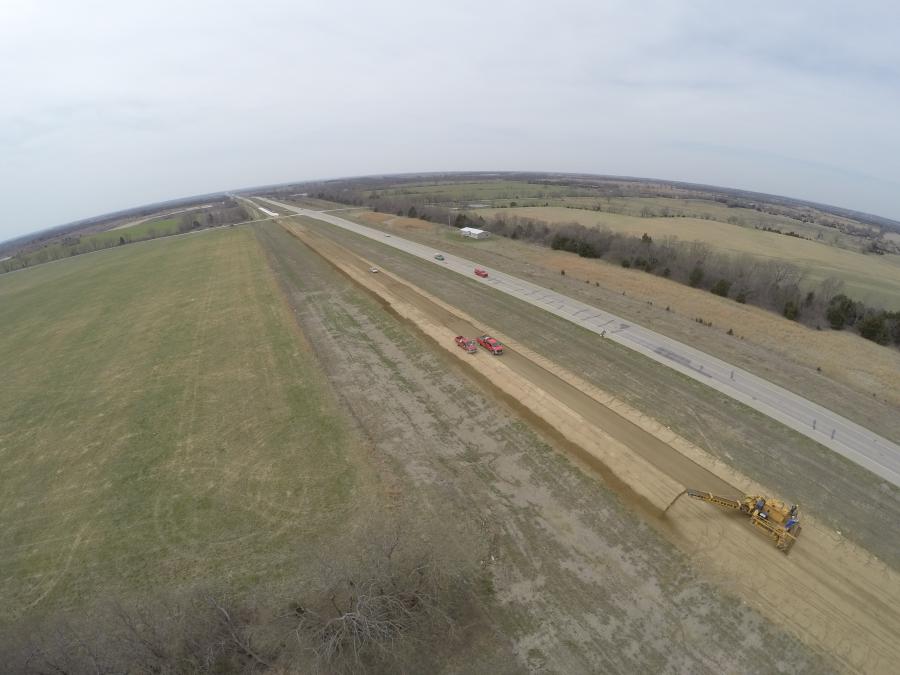 The construction of the two new bridges — a haunched concrete-slab bridge and a steel-girder span bridge — has proceeded smoothly, with no major issues, Petrowsky said.

"The contractor also performed rehab work on one existing bridge with no major issues," he added. "They were held up on starting this work due to the presence of cliff sparrows at the bridge during their nesting and molting season. One of our project specifications prevented the contractor to start any rehab work with the presence of migratory birds. However, once they got started, the actual work went really well.

"The construction of a rigid-frame box bridge didn't go as well," he continued. "Once the grading contractor started to place the 20 feet of fill on top of it, we began to notice considerable cracking in the structure. Construction in this area was halted. It was determined by KDOT to work up a separate project to address this repair at a later time, since the location of this structure is in an area that did not need to be completed prior to opening the project until unrestricted traffic was set to resume."

On peak days, Koss has approximately 30 plus construction workers on site putting in day shifts.

Many subcontractors have been hired for this project. A.M. Cohron & Son Inc. was brought in for the steel-girder bridge and bridge rehab work, with subcontractors Ram Construction Services for multilayer polymer concrete overlay, Linder Painting Inc. for painting structure steel, Gary Crain Inc. for deck grooving and Hayes Drilling Inc. for drill shafts.

Reece Construction Company Inc. is responsible for the haunched slab bridge, and it brought in Gary A. Crain Inc. and Hayes Drilling Inc. for pre-drill pile holes. 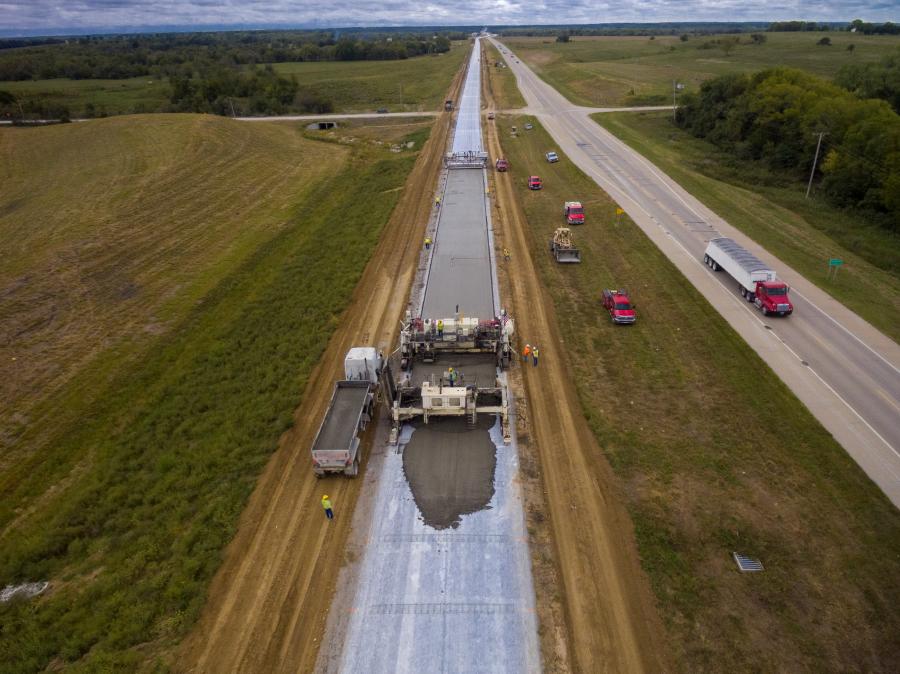 The amount of material being removed and brought in for the project is still being tabulated.

Although the road widening has the appearance of being a standard project, Petrowsky stressed that KDOT personnel always look for ways to improve management and overall construction.

"Our staff and the consultant inspectors we used on this project learned several valuable lessons that will help them mature as project inspectors," he said. "I learned the importance of listening to our maintenance personnel working in the direct area and relaying their concerns and knowledge up to our design personnel. Their knowledge of actual field conditions assisted greatly on developing the plans and making sure that all the erosion issues had been addressed. Having a better picture and appreciation of the types of issues we're dealing with is crucial, and relaying that information to the design team ensures that problems are addressed rapidly. This benefits all and ensures projects are completed as soon as possible."