Extensive Improvements Being Made to Fitchburg Rail Line 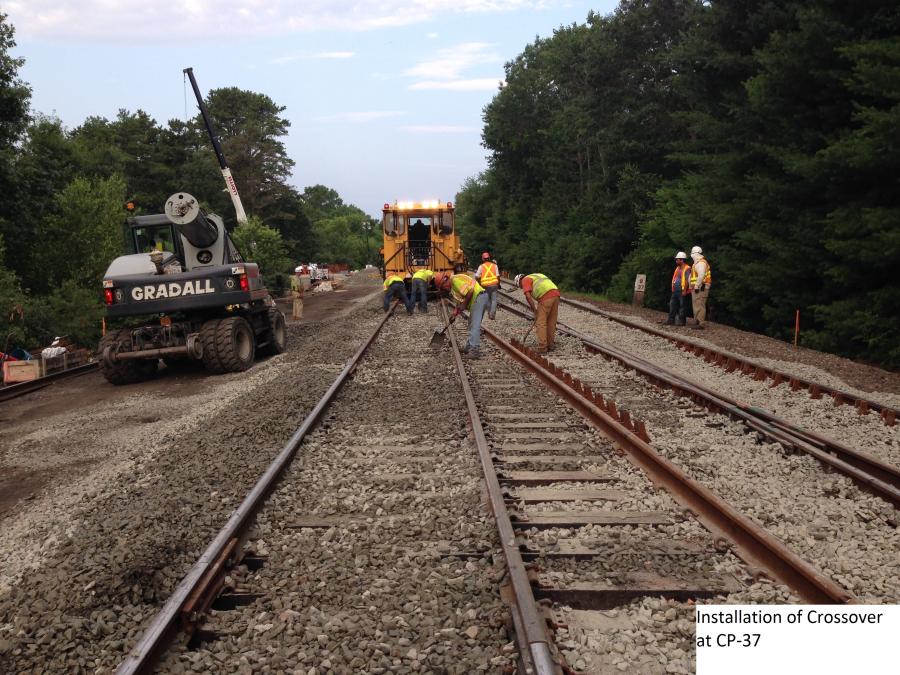 Of the five bids submitted to the Massachusetts Bay Transportation Authority (MBTA) in 2013 for the Fitchburg Commuter Rail Improvements Track, Civil and Signal Project, the joint-venture of J. F. White Contracting Co. and LM Heavy Civil Construction (LMH) — J.F. White/LM Heavy JV — submitted the lowest bid at $57.7 million and crews were on site in July 2013.

The project, which covers 48 mi. (77.25 km) of the MBTA's Fitchburg Commuter Rail Line (Somerville to Fitchburg) operated by Keolis Commuter Services, which provides rail service to 127,000 passengers daily throughout Greater Boston and Rhode Island, is slated for completion by the end of 2015. .

The improvements to the Fitchburg Route are extensive. According to the MBTA web page, “It will consist of improvements to the existing track alignment; construction of new tracks through select segments; new or improved interlockings; a second track through South Acton Station area; a new train control signal system; replacement of Automatic Grade Crossing Warning Systems (AGCWS); and upgrade of existing at-grade highway crossing track and roadway surfaces. These improvements will be made while the existing commuter line service and freight line service continues to operate.”

In addition to the track and signal infrastructure improvements, the MBTA also is undertaking other improvements on the Fitchburg route. A new station with high-level platforms is under construction in South Acton, under a separate contract with McCourt Construction. The repair or replacement of seven bridges is being done under a separate contract with J.F. White Contracting Company. Upgrades to the Fitchburg Route that have already been completed include installation of 8 mi. (12.8 km) of a second track, construction of a new station in Littleton and transfer of the Waltham Tower to the MBTA Control Center.

The MBTA's project manager for the project is John Doherty, who has been with the agency since 2013.

“The work is on schedule and it's taken a concentrated effort on the part of all stakeholders, particularly the contractor and the railroad operator,” he said. “We meet weekly for coordination and schedule review. We look at all issues, with a focus on the upcoming weekend work. We haven't had to expand the scope of the project and the work is proceeding as planned.”

Doherty has five personnel reporting to him, including engineers and inspectors. His staff oversees the construction performed by J.F. White and signal system cutover by Keolis.

“The coordination is really paying off as we are upgrading an antiquated track and signal system,” he said, “which includes signal houses, logic boards and new LED signal lighting. What this project is telling us is that good coordination among the owner, contractor, railroad operator and designer, HNTB of Chelmsford, Mass., is essential as we're installing new systems while still operating with older ones that are being replaced. We realize that the construction is causing inconveniences for commuters and we appreciate their patience, particularly during the weekend outages which come to an end in November.”

Richard Schaetzl, who works for J.F. White, and is the project manager for the J-V, notes that his crews have been busy.

“The project consisted of adding six new interlockings where the trains will be able to cross between tracks, and to modernize the signal system,” he said. “There also is track work, civil work, retaining walls to install, and general signal work to integrate these new interlockings on the line. There also are four existing interlockings that we had to upgrade. The track is being upgraded so that 95 percent of it will be double track and the interlockings are needed to do track maintenance and give the MBTA more operational flexibility along the line.

“We've installed all the special track work, crossovers and turnouts,” he added. “We have done roadway improvements; put in 28 automatic highway warning systems for crossings; replaced eight grade crossings with track and roadway reconstruction; installed 54 signal instrument houses; put in retaining walls, which consisted of H-piles with timber crosstie lagging; drilled shafts with precast concrete panels; and reinforced earth concrete block retaining walls. We also realigned 20 curves over the 48 miles to improve the speed of the trains, repaired culverts, did some undercutting of existing track to lower the track profile under some bridges.”

Passenger train service is suspended on weekends, essentially giving J-V crews 48 hours to work without interruptions. Freight train service outages also were required. During the week, the MBTA and Keolis provide flagging and signal support in the areas where work is scheduled.

“We've had challenges with getting railway flagging and signal support,” said Schaetzl. “The MBTA has several projects going on right now and we're planning and coordinating through the challenges. Suspending the weekend service for the last two years has really helped us with our progress as most of our work occurs on weekends. We work during the week as well to perform the roadway signage and pavement markings to accompany the roadway improvements.”

Crews are working at multiple sites, which require effective communications systems to deal with coordination and in some areas, temporary construction fencing has been installed to protect the vehicles and equipment. In many locations equipment can be parked along the right-of-way at the end of each shift.

“We hold weekly meetings and provide on-time updates to get everyone up to speed on what has happened and what is going to happen in the next week and in some cases, the next few hours,” said Schaetzl. “The communication is fabulous with cell and smart phones. We have one general superintendent and during peak construction, we have three other superintendents — two for civil and one for electrical.

“It's relatively easy to dispatch equipment to a site if something breaks down,” he added. “We borrow from another project, as we have a lot of work going on in the Boston area. In some cases on weekends, we grab equipment to replace the pieces that break down and return them on Monday mornings.”

During the week, the crews do daily single-shifts, but on weekends the work is non-stop. Personnel on site during the weekdays number nearly 25 — J-V and subcontractor — and on weekends, this jumps to 90 at the peak. The J-V provides about 90 percent of the workers.

“Both J-V companies are sharing responsibilities for the work,” said Schaetzl, “but as we have the electrical division, we're taking care of the signal work.”

“LMH was a subcontractor for J.F. White on a project in 2010-2011 when we had to perform the emergency tie replacement on the MBTA's Old Colony railroad — where the concrete crossties were cracking,” said Schaetzl. “We found that our companies were fairly compatible because we do the same work. It was a good match then and we decided to team-up again on this job.”

Both firms are supplying people and equipment. Maximizing the workers on weekends is crucial.

“The key to scheduling the weekend work and keeping teams together who work well is flexibility,” said Schaetzl. “Several employees from other projects of both partners come to the Fitchburg Track and signal project on weekends to assist in the work. The hours per-shift are planned out so that employees get proper rest times, to diminish the potential for fatigue issues. At the start of each weekend shift, a safety briefing is held to review the proposed work of that shift and the forms of railroad protection.”

Due to the severe winter last year, with massive snowfalls, work was cut back on many aspects, but some civil and electrical work could be done.

“It is a little harder for the equipment to operate in the winter,” said Schaetzl, “but we persevere and it works into our average production. Last winter was a complete anomaly and we didn't accomplish as much as we had hoped or wanted.”

Schaetzl has been with J.F. White for 30 years and has worked on many rail projects, noting that the firm started doing rail work 10 years before he arrived.

“We've done this work before,” he said. “It seemed interesting that this is a combination project. Usually the MBTA handles the signal system upgrades with different contracts, but this one seems to make sense, with all the work inside the interlockings, to incorporate both track and signals together.”

Equipment being utilized on the project includes high-rail excavators made by Gradall and Hitachi; loaders manufactured by Caterpillar for the civil work; and boom trucks and lulls used by the electricians. Specialized track equipment also is in service: Mark IV Tamper from C&G ballast stone cars; locomotives from Track Mobile; ballast regulators by Kershaw; a crib compactor from Plasser; and a high-rail log loader from Sterling Equipment.

Both J-V partners are supplying onsite mechanics and helping each other out when equipment repairs are needed.

“Most of the equipment repairs happen during the week, as well as scheduled maintenance inspection checks,” said Schaetzl. “Because of the criticality of getting the track back in service each weekend, the mechanics do a prep on Thursdays and Fridays to have it ready for the weekend work. We just keep rolling with this repair and maintenance cycle. We have a very good staff servicing our equipment.”

Schaetzl also noted that this project is providing solid experience to his crews for future projects.

“We're going to gain more knowledge of track and signal work for more of our employees. More people have been exposed to it on this project than on previous ones,” he said. “This is related to multiple crews working on multiple sites on weekends. The planning also is getting people involved with these aspects of the work.”

The electrical work has been installed via strict compliance with the lockout/tag out rules and the overall work is being thoroughly inspected.

“It's been a cooperative venture with LM Heavy Civil Construction and both the MBTA and Keolis,” said Schaetzl. “Everybody has the same drive and goal to deliver a quality project.”