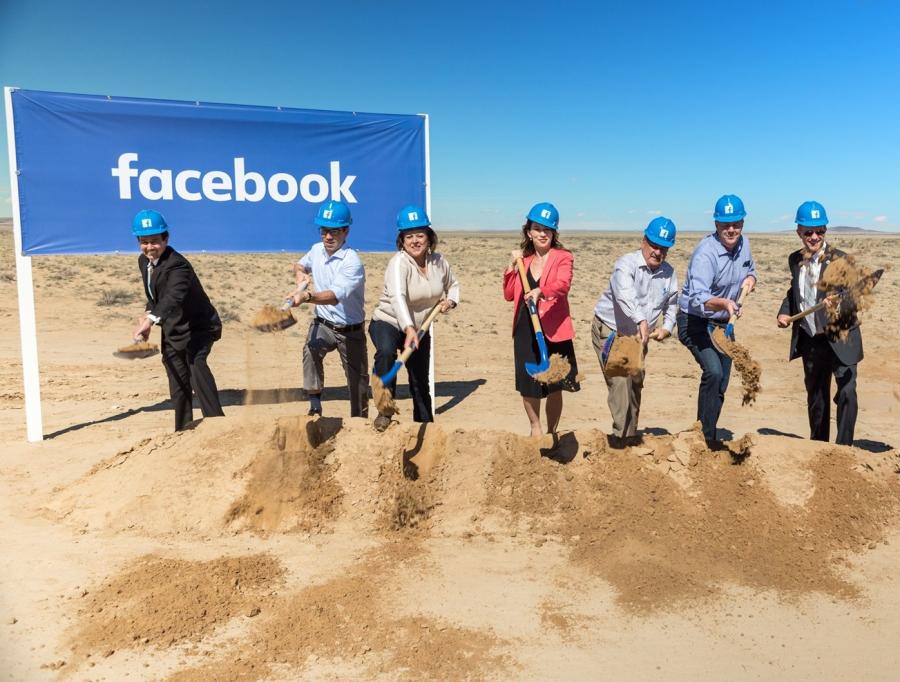 City and state officials at the groundbreaking of the New Mexico data center. (datacenterdynamics.com photo)

ALBUQUERQUE, N.M. (AP) — Facebook's plans for New Mexico now call for a half-billion-dollar investment and a data center that will span an area equal to 17 football fields.

Gov. Susana Martinez's office announced on July 18 that the social media giant will be doubling its investment in the state with the planned expansion of its data center currently under construction near Los Lunas, a rural area just outside of Albuquerque, N.M.'s largest metropolitan area.

The governor praised the announcement, saying Facebook is among the state's key partners as it works to diversify its economy.

“New Mexico's powerful incentives are bringing more opportunities to our state — once again ahead of schedule with more jobs and investment than initially anticipated,” the governor said in a statement.

The news comes as New Mexico looks to turn the corner after a crippling budget crisis that stemmed from a downturn in the oil and natural gas sectors and an overall weak economy. The state also has struggled with high unemployment numbers, only recently ending its stretch at the top of the nation's jobless rankings.

Had it not been for the oil and gas downturn, Martinez has said New Mexico's over-the-year job growth in 2016 would have been the strongest it's been in a decade.

State officials and business owners have been scrambling in recent months to take advantage of the windfall expected to come from the data center during construction and once it's online in 2018. They're pushing for more high-tech industries in hopes of guarding against the volatility of the energy industry.

Facebook broke ground on the first building in October. It's expected to go live in late 2018.

The second building will likely keep construction crews busy through 2020.

Tom Furlong, Facebook's president of infrastructure, thanked the Martinez administration and the village of Los Lunas for their support and said the company continues to find a strong pool of talent to build the data center.

More than 280,000 hours of work on the project have already been logged, more than 3 million cu. yds. of dirt have been moved and more than 30,000 cu. yds. of concrete have been poured, according to the company.

In August 2015, the two-term Republican governor led an economic development team to California to meet with company executives to promote New Mexico. Facebook selected the state over Utah for the data center after a mini bidding war.

Los Lunas agreed to give up property taxes for 30 years in exchange for annual payments starting at $50,000 and topping out at under $500,000, while the state promised billions of dollars in industrial revenue bonds and other economic development funding. State utility regulators also cleared the way for Facebook and Public Service Co. of New Mexico to create a renewable energy tariff, which allows the company to secure solar- and wind-generated electricity to power the data center.

Facebook said the Los Lunas facility will be one of the most advanced, energy-efficient centers in the world. It will have an evaporative cooling system capable of protecting the servers inside from New Mexico's frequent dust storms.

State economic development officials have estimated that New Mexico could gain about $75 million in gross-receipts tax revenue over the next decade from construction costs related to the project.