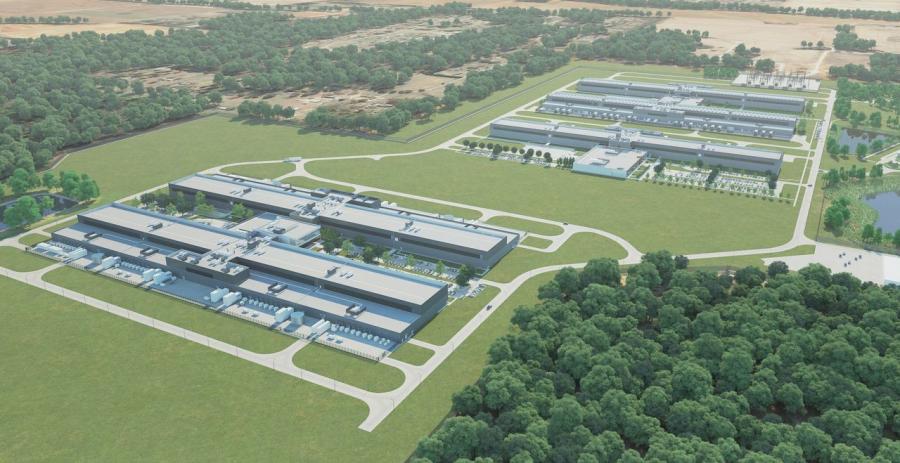 A rendering of the expansion of Facebook's data center campus in Huntsville, announced June 8, 2021. (Facebook rendering)

Facebook's ongoing expansion in Huntsville, Ala., will top $1 billion in capital investment, the social media giant announced June 8, confirming earlier AL.com reports in February of the growth of the sprawling facility.

More than 200 people will be employed once the expansion is finished and operational, according to Facebook. That number is twice as many as first announced when the tech company said in 2018 that it was building a data center in the Rocket City.

The site of the data center will be in the North Huntsville Industrial Park, near the Toyota Motor Manufacturing campus. It will feature four distinct buildings that will house servers to support Facebook and Instagram. In total, the entire facility will encompass nearly 2.5 million sq. ft. campus and represent an investment north of $1 billion, Facebook said in a news release.

"Construction of the third building is well under way, and construction is already starting for the rest of the campus," Facebook noted in the announcement and reported on the AL.com news site. "As of today, this campus has contributed over 5 million work hours to the Huntsville economy. Nearly 24,000 tons of steel have been erected and 500,000 cubic yards of concrete poured."

The announcement from Facebook, based in Menlo Park, Calif., touted its data centers as "among the most energy and water efficient data center facilities in the world."

For example, the news release said that Facebook's Huntsville Data Center will be supported by 100 percent renewable energy, which will include a solar project in nearby Muscle Shoals.

The two original buildings of Facebook's operation are nearing completion, the company said, and will be online by the end of the year.

Last November, Huntsville's city council gave its approval to the Facebook campus expansion in the North Huntsville Industrial Park. According to the amended project development agreement, the global tech giant purchased 197 acres from private owners adjacent to the original campus, which was made up of about 250 acres purchased from the city, AL.com reported.

Facebook first announced its plans to come to the dynamic Huntsville area of north Alabama in 2018, followed by making a $750 million investment.

The company also has won local hearts and minds by becoming an active corporate partner in Huntsville, sponsoring Huntsville-Madison County Chamber of Commerce events and donating almost $1 million to the county's schools in 2020 to make digital technology more accessible to students. Facebook also gifted $100,000 to Alabama's under-construction School of Cyber Technology and Engineering in Huntsville, among other community efforts.