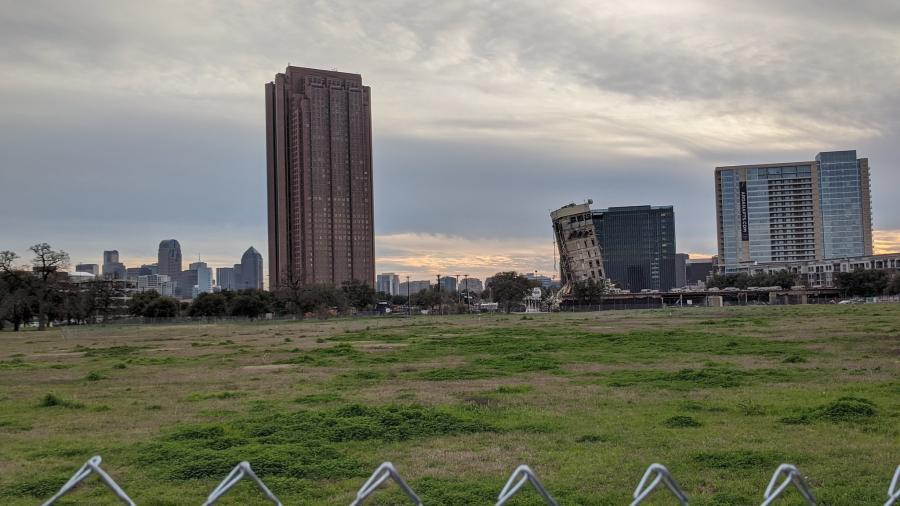 An 11-story building was supposed to be demolished on Feb. 16, but a part of the structure would not come down, which caused an internet and media sensation. (Benjamin Bratcher photo)

A failed demolition has given Dallas a new city landmark. Temporarily, at least.

On Feb. 16, the implosion of an 11-story tower on Haskell Avenue near downtown Dallas failed to bring down the center of the structure, causing a "Leaning Tower of Dallas" to remain standing.

The implosion by Lloyd D. Nabors Demolition was part of The Central, a 27-acre, $2.5 billion development project that will bring an office building, a hotel, eateries and other amenities to an area just north of downtown Dallas, according to the Dallas Morning News.

But nearly 300 lbs. of dynamite wasn't enough to topple the old building on the development site, said Steve Pettigrew, president of Pettigrew Inc., a company involved in the demolition.

Pettigrew blamed timing, saying the building, which has a concrete and steel core, "undressed itself" too quickly during the implosion.

"The skirt came off the core," he said in an interview.

The remaining structure — which a Lloyd D. Nabors spokesperson said is "safely contained" within the job site — will be demolished later with a crane and a wrecking ball.

Once the remainder of the structure is removed (which still includes the elevator shaft), it will make way for the $2.5 billion mixed-use project.

The botched demolition caused a social media stir, as many local residents flocked to the scene to take photos mimicking holding up the Leaning Tower of Pisa. The story was picked up by numerous national media outlets.

There has even been a change.org petition started to save the tower by making it a UNESCO World Heritage Site. The petition reads, "Over the past few days, The Leaning Tower of Dallas has become the city's largest cultural icon. After making national headlines, we are finally famous for something other than the JFK Assassination. You wouldn't tear down the Leaning Tower of Pisa or the Great Pyramids of Giza and replace them with condos, would you? If anything, do it for the memes."