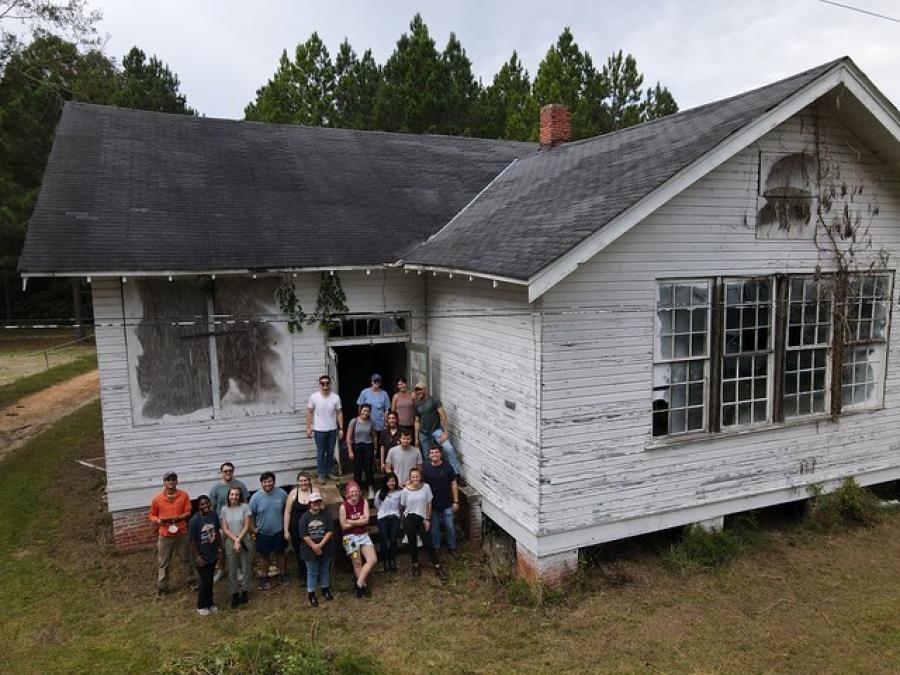 A multidisciplinary Auburn University research team will utilize money from a National Park Service grant to work with a preservation contractor to stabilize the Tankersley Rosenwald School in Hope Hull, Ala., complete a Historic Structures Report and develop a preservation scope of work for rehabilitation of the exterior of the historic building. (Photo courtesy of Auburn University website)

A multidisciplinary research team at Auburn University will use money from a recent National Park Service (NPS) grant to work with a preservation contractor to stabilize the crumbling Tankersley Rosenwald School in Hope Hull, Ala., one of many schools built for African American children in the first half of the 20th century.

A total of $499,799 in NPS funds were awarded to the research team's improvement project in the town of Hope Hull, just southwest of Montgomery.

The researchers in Auburn's College of Architecture, Design and Construction (CADC) and College of Liberal Arts received the NPS grants in late May to further their efforts to document and preserve African American and civil rights history.

In addition, the mix of professors and students will complete a Historic Structures Report (HSR) and develop a preservation scope of work for rehabilitation of the exterior of the historic building.

A team of CADC faculty, including Gorham Bird, Junshan Liu, Hunter McGonagill and Richard Burt, is overseeing a restoration and preservation project throughout Alabama focusing on Rosenwald — nearly 400 learning centers built in the state between 1912 and 1932.

Supporting their work are Keith Hébert and Elijah Gaddis, professors in Auburn University's College of Liberal Arts, and from Georgia Tech's Danielle Willkens.

The Tankersley school has been vacant for decades, but more recently has been at risk of collapse due to water intrusion that has led to structural failure.

"Our team is thrilled and honored to have the support of the National Park Service," Bird said on the Auburn University website. "This award highlights the need to preserve sites that contribute to the full American story, particularly Rosenwald Schools of the rural segregated South. This grant enables our team to provide preservation expertise to a rural nonprofit organization for the stabilization and rehabilitation of the shuttered Tankersley Rosenwald School in Hope Hull."

The Hope Hull project is supported through an African American Civil Rights grant, provided by the Historic Preservation Fund (HPF), and administered by the NPS, part of the U.S. Department of the Interior.

The grants, which total more than $16.2 million, will benefit 44 projects in 15 states and support preservation of sites and history related to the African American struggle for equality.

In addition, another Auburn-led project titled "Memory and the March: Oral Histories with Selma's Foot Soldiers," headed by Hébert and Gaddis from the university's Department of History, received $46,588 in funding from the NPS.

"The National Park Service has recommitted its resources to identify, preserve and interpret resources connected to the nation's African American history in a profound way that greatly expands the ability of Black rural community partners to collaborate with institutions such as Auburn University to transform how our nation remembers its tumultuous past while reflecting on how best to move forward in a time of great change," Hébert said.

"By elevating the stories of Rosenwald School buildings and Bloody Sunday's foot soldiers, these projects will enhance our nation's understanding of how Black Alabamians have historically challenged the racially segregated social order to build vibrant communities and stake their claim to fulfilling a vision of a more perfect and equitable union," he continued.

Congress appropriated funding for the African American Civil Rights Grant Program in fiscal 2021 through the HPF.

According to the Auburn University article, the fund draws its revenue from federal oil and gas leases on the Outer Continental Shelf, aiding a broad range of preservation projects without spending tax dollars, while working to mitigate the loss of a nonrenewable resource to help the preservation of other irreplaceable resources.

Established in 1977, the HPF is authorized at $150 million per year through 2023 and has provided more than $2.7 billion in historic preservation grants to states, Tribes, local governments and nonprofit organizations. HPF funds may be appropriated by Congress to support a variety of historic preservation projects to help preserve the nation's cultural resources.