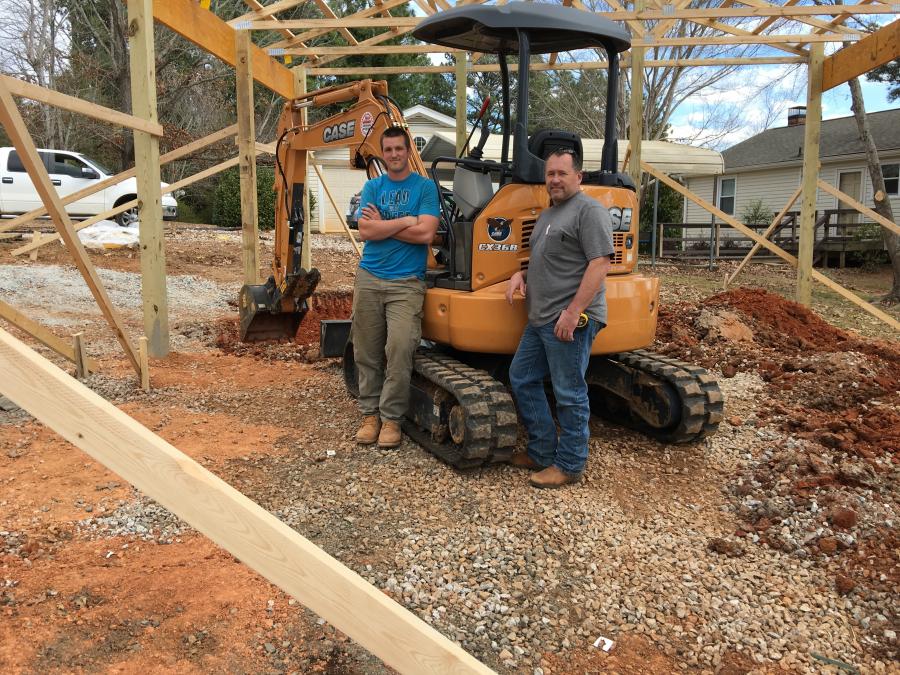 Rodney (L) and Dan Fehr, both of Dan Fehr Builders.

Dan Fehr of Dan Fehr Builders, Greenville, S.C., has been building new homes since he was 15 years old.

Like many in the traditionally family-dominated construction industry, Fehr is following in his father's footsteps.

“Originally, my Dad was a contractor since he was 18 years old and he's 64 years old now,” he said. “I started in construction when I was 15 years old and took charge of his crew.”

The family moved to the Greenville area in the early '90s, having originally come from Canada via Meadville, Pa. Fehr said that it was natural for him to join the business.

“Well, the business was about all I knew,” he said. “I didn't have a high school education and so working for myself was the way to go and that was one thing that I was really good at, I guess you would say.”

Today, Fehr's business completes approximately 15 full housing projects per year across South Carolina, as well as another 20 or so smaller projects, which include pole structures, garages and small residential constructions. Although new home building is Fehr's primary source of work, the company also rents construction and versatile equipment.

The most current project in Clinton, S.C., is typical of Fehr's kind of work.

“This one involves grading the base of a pole building and getting ready to grade another for a carport,” he said. “We'll be pulling about 8 inches of earth out of one side of the building and moving it to the other side. After that, we'll be putting in a concrete driveway, getting the building itself built and then doing some renovating on the inside of the house, as well.”

For this project and other similar ones around the region, Fehr is using, in part, a Case CX36B mini-excavator and a Case TR 310 track loader, both purchased from Hills Machinery, with locations in Columbia and Charleston, S.C.

“Hills Machinery offered very good follow-up with me and they were flexible payment-wise, and they are able to get the machines on site when I need them,” he said. “And if I have a problem, I call them and they address it quickly.”

Fehr owns a number of Case machines and has found the CX36B particularly valuable as the 'six-way blade or four-way blade that's on the front of the machine is without comparison' in the market. The company's Case equipment gets maintenance from Fehr's team so it's “always ready to go when we want to go to a job site,” he said.

In a competitive marketplace, Fehr believes his company differentiates itself by “considering the customer to be on the same level as we are. We try to do all our work as if we were doing it for ourselves as that's how we get a good reputation. If we get call-backs, then we address them promptly and we try not to drag them out because that tends to get the customer irritated. which in turn, leads to more trouble.”

This philosophy has allowed Dan Fehr Builders to weather the downturn in the housing market that occurred from 2009 through 2010. While the majority of the company's work came from new home construction, Fehr mitigated the risk of reduced income through being versatile and going the extra mile for customers.

“We had equipment and were willing to climb under houses and do work that most people weren't willing to do,” he said. “A lot of our projects were smaller, but it paid the bills and kept food on the table.”

Providing high-class customer service is what Fehr enjoys the most about the construction business.

“Everybody says you run your own schedule in this business, but I always say the customers run my schedule. That's what you have to do to keep them happy. I can take time for family when I need to, though, because even customers understand you have to have family time!”

Hills Machinery was founded in 2007 to sell, rent and repair equipment. In 2010, Hills Machinery was appointed the Case Construction Equipment dealer in North and South Carolina. The business is owned by two brothers, Adam and Jim Hills, who run the company with a dedicated group of heavy equipment industry professionals. Over the past several years, Hills has expanded across the Carolinas and carry other equipment lines such as Terex Finlay, Rubble Master, Edge Innovative, Gradall, Mauldin Pavers and many more.