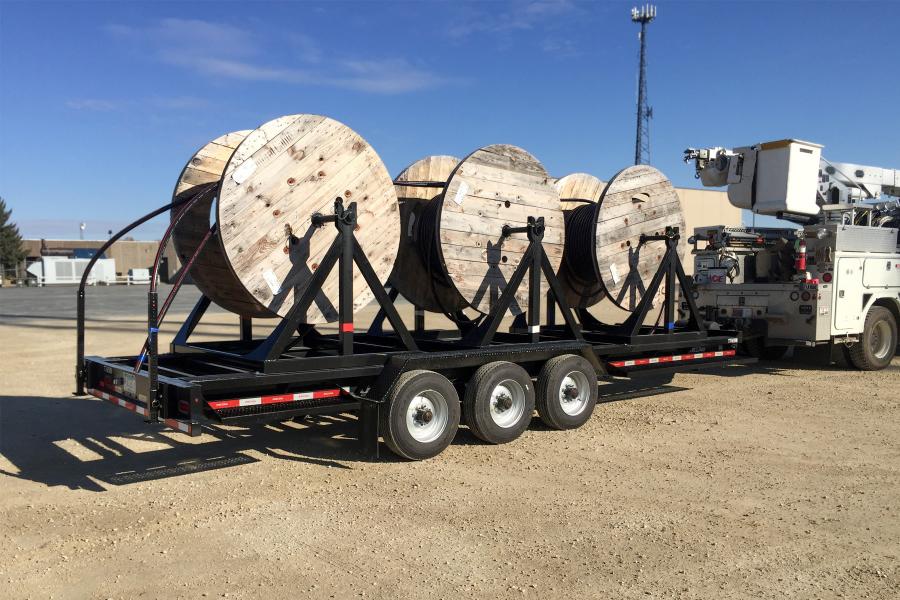 In 2003, an Electric Cooperative company based out of southern Minnesota was looking for an alternative trailer supplier that was locally based. Having heard of Felling Trailers, the Co-op made the call and was put in touch with Laurie Engle, one of Felling's trailer sales consultants. At that time Felling had been building cable reel trailers for about 10 years and was considered relatively new to the utility industry. Engle worked with the Cooperative to configure a triple reel trailer to meet their company's needs, which was the start of a 15-year partnership.

"Laurie treated me well and has been nothing short of fabulous since the day we first talked," said the operations manager of the Co-op.

A few of the features that were incorporated into the build of the FT-30-3 triple reel were selected to increase time efficiency and worker safety.

A-frame reel stands: the trailer is equipped with three bolt-on reel stands. The design of the reel stands provides accessibility for the operators to load cable reels by use of a forklift vs. loading with a boom truck. The versatility to load reels this way saves the operator time and reduces safety risks. A bonus with the reel stands being bolt on: they can be moved when there is a need to adjust the tongue load, ensuring proper weight distribution when towing.

Custom air tank: the large air tank is located in the hitch with a pressure gauge, shut off valve, and airline for the operation of the air brake system.

"It is common for the Cooperative to deliver the reel trailer to job sites loaded with cable so that the contractors can start boring the cable underground before the Cooperative's crew is needed on site. However, where the trailer is left on the job site isn't always where the contractor needs it to be for the boring and without an air brake equipped truck moving the trailer would be more like dragging the trailer," said the operations manager.

The air tank feature provides the necessary air pressure for operation of the air brake system allowing the trailer to be moved to the needed location on the job site.

Catwalk: As with the majority of electric cooperatives, the spring and fall of the year are the Co-op's busiest times. With these times of year comes a variance of weather extremes, especially in Minnesota — it is not out of the ordinary to have ice and snow in late May or in early October. The varying weather and working conditions played a strong factor in the construction of the FT-30-3 triple reel's catwalk feature. The catwalk runs the length of the trailer from headboard to fender and then from fender to tailboard. Constructed with grip strut with an approximate width of 10 in., bracing then runs underneath with a rear lip to prevent fall through.

Safety & Stability: additional features that were selected for this trailer were two rear pull pin stabilizer legs and rubber wheel chocks. When deployed these two features work together to maintain the stability of the trailer and the integrity of the load.

The FT-30-3 Triple Reel trailers are used to haul large underground cable from job to job, but these units only represent a few of the Felling trailers that the coop has in its fleet.

"Our fleet consists of 35 trailers, 20 of these are Felling trailers. The capacity and function of the trailers range from dump boxes [hydraulic dump trailers], to cable trailers and flatbeds [both drop deck and deck over]. The dump boxes are used to haul dirt and sand to and from job sites. We also use them to haul logs and tree debris when we are trimming trees. The newest update to our drop deck trailers is to galvanize them. They are out quite a bit in the winter hauling our mini excavators to and from job sites, the galvanizing will help them last longer in dealing with the winter elements," said the operations manager. "These trailers help the work run smoothly. They are good, well-built trailers, they work great for us."

For more information about Felling Trailers, call 800/245-2809 or visit www.felling.com.