Final Beam Raised on Unique Facility at Auburn, Set to Open in 2022 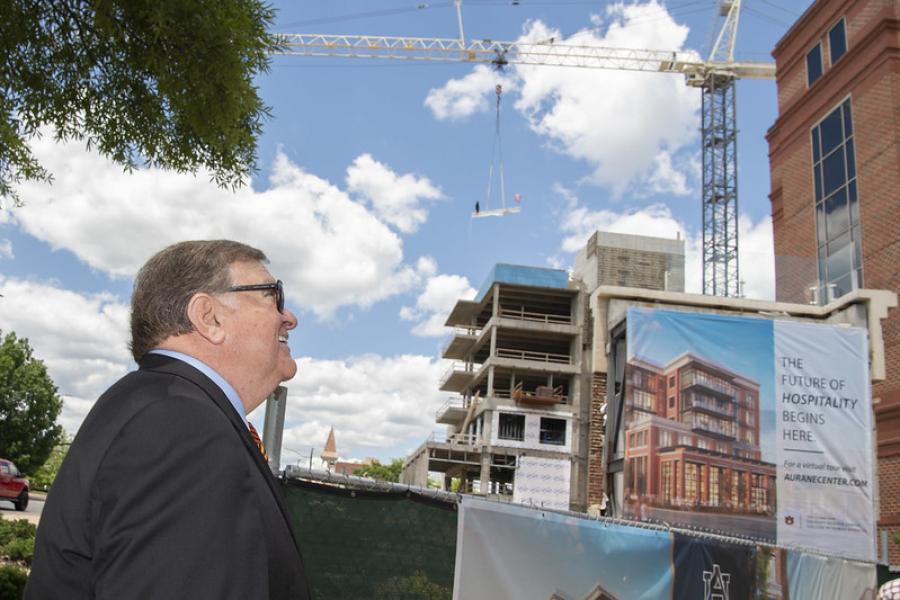 James W. “Jimmy” Rane watches the final construction beam be hoisted to the top of the Tony and Libba Rane Culinary Science Center at Auburn University on May 14. The Rane family made the lead gift to the construction of the world-class facility, which the Auburn Board of Trustees agreed to name in honor of Rane’s parents, Tony and Libba Rane. Jimmy Rane was the first person in his family to earn a college degree. (Auburn University photo)

A crane hoisted the last construction beam atop a unique, world class facility at Auburn University on May 14, marking a critical point in the construction of the school's Tony and Libba Rane Culinary Science Center.

In 2017, Rane committed $12 million to the construction of the center on behalf of his family. Auburn's board of trustees later approved naming the facility in honor of his parents, Tony and Libba Rane. The elder Rane was the son of Italian immigrants who became a successful entrepreneur through his successful restaurants, retail stores and hotels.

"I remember how passionate my dad was about the quality that he wanted to produce in his restaurants," said Rane in an Auburn press release on the ceremony. "And if it inspires just one young person to go on and do some of the great things that he did, it'll all be worth it. But I have a feeling it will inspire more than just one."

Bailey-Harris Construction, based in the city of Auburn, is continuing to work on the structure so that the culinary science center will meet its target of opening in the fall of 2022.

The 142,000-sq.-ft. Rane Center will house the university's hospitality management program in the College of Human Sciences, according to the university news release. Auburn students interested in hospitality and culinary science will get hands-on learning experiences at The Laurel, a nearby luxury boutique hotel, and at "1856", a teaching restaurant in town. The Rane Center also will be home to classrooms and innovative demonstration and food production labs.

Ivey noted that the new building will not only benefit tourism and hospitality industries in Alabama, but "definitely put us on the map worldwide."

Indeed, Rane learned in talking with experts that there were more than 70 culinary science centers around the world, but none of them had every facet under one roof.

The Rane Center also will be unique among Auburn learning facilities in that it blends a major academic component with revenue generating elements.

The university is already home to the state's only professionally accredited hospitality program. The school believes the Rane Center "will be a draw for students currently in top culinary programs in high schools in Alabama and across the nation. It will also become a destination for alumni and new guests alike who enjoy food and beverage tourism," according to the news release.

In her remarks at the May 14 event, Ivey noted, "The bottom line is this center will train future generations in the hospitality industry in first-class style. It will be a credit to future generations and give lots of young folks opportunities that they never would have had."

The dream and vision for a culinary science center at Auburn started more than 10 years ago when Martin O'Neill, head of the college's Department of Nutrition, Dietetics and Hospitality Management, and Hans van der Reijden, managing director of The Hotel at Auburn University and Dixon Conference Center, were asked to visit globally recognized programs and facilities to create a standard for a proposed on-campus center.

O'Neill had dreamt of enhancing Auburn's hospitality program since he came to the school in 1999, knowing that improvements would not only benefit students but stretch beyond to the community and state.

"We want this to be a very interactive site and facility for the community, but we also see it as an engine for workforce development for the state," he explained. "Tourism remains a multibillion-dollar industry for [Alabama]. We're hoping we're going to be at the forefront of that engine moving forward, supplying and meeting the needs of the industry."

Planners at Auburn University decided the optimum place to build The Rane Center is at the intersection of South College Street and Thach Avenue, an area where the campus and community meet.

"That got my juices flowing," Rane said in the press statement. "You know at Auburn we do like to be number one."