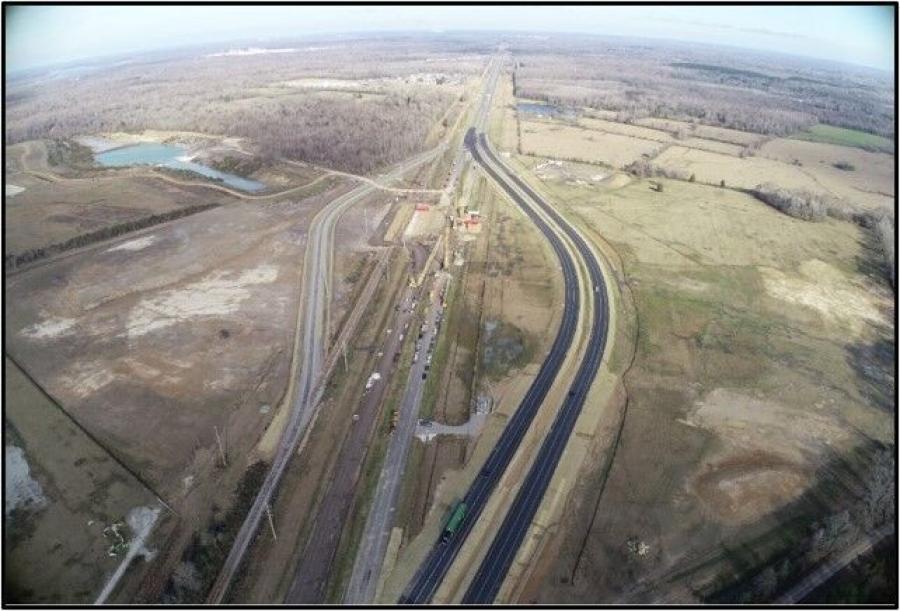 Construction of a section of the future Comite River Diversion Canal (center) and future bridges need to cross the overland waterway at U.S. Highway 61 near the West Feliciana Parish line. U.S. 61 has been temporarily diverted (dark blacktop on right) around the construction area. (U.S. Army Corps of Engineers photo).

The Comite River Diversion Canal, a long-awaited flood-control channel for the Baton Rouge, La., area, is expected to take a year longer than anticipated to build and will not be finished until December 2022, federal officials have announced.

The 12-mi.-long channel will divert water from the Comite River and other smaller waterways into the Mississippi River.

Discussed since the 1960s and studied intensely since the 1980s, the channel gained new relevance, political momentum and long-needed federal and state funding after the 2016 floods devastated tens of thousands of homes in the Baton Rouge region.

While the canal route beginning between Baker and Zachary is a downhill flow due west to the Mississippi, the path cuts through highways, railroads, swamps, pipelines and other obstructions that for years have complicated its design, cost and construction.

The U.S. Army Corps of Engineers (USACE) officials' statement confirms the concerns some Louisiana officials had aired at the end of 2020 about the project's progress.

Last fall, U.S. Rep. Garret Graves, from the 6th District, had warned USACE officials that he was worried about slippage in the construction timeline and, by mid-November, agency and state highway officials had told a legislative task force that they were trying to determine then if they could hold the original schedule.

So far, the USACE has issued four of the 18 different clearing or construction contracts since the $343 million construction phase started in early 2020, Corps officials said.

In early February, the USACE awarded its latest contract, a nearly $9.5 million agreement with Baton Rouge-based Coastal Contractors Inc., to build a bridge at McHugh Road on the eastern end of the channel, agency officials said.

The Louisiana Department of Transportation and Development (DOTD), one of the non-federal sponsors of the project, also had issued contracts to design and build bridges and other improvements at LA Highway 67 and LA 19, and has plans to open bids for traditional bridge construction job at LA 964 in May, the department disclosed.

Work on a new two-lane $10 million-$11 million LA 67 bridge also is expected to start in May or June. The design is nearly complete, DOTD officials said.

One of the most visible phases under way is on U.S. Highway 61 near Barnett Road. Under a $55 million USACE contract awarded in May, James Construction Group in Baton Rouge is building new bridges for U.S. 61 and the Kansas City Southern Railroad line as well as digging out the section of canal that will run under the new bridges.

Vehicle traffic and the rail line have been rerouted around the construction sites.

Nick Sims, assistant deputy district engineer of the USACE in New Orleans, explained that the process of buying the remaining land for the canal has gone slower than expected and has, in part, been delayed by a hydrological study of the lowland area near the western end of the channel and the Brooks Lake area.

Construction on those final phases will not be completed until the end of 2022, Sims noted.

The DOTD said it can have all the land purchased by June. An agency spokesperson added that the state agency had bought 57 of the 82 parcels needed so far, seven more than had been purchased 3½ months ago, according to a mid-November report to a legislative task force.

To compress the construction timeframe and meet that late 2021 deadline that Corps officials had considered "aggressive," the agency decided to build the Comite River Diversion Canal in phases but also make it so that various stages of design, land acquisition, clearing and construction run in parallel to one another, instead of taking one step at a time.

The timing of even one of those phases, however, can affect others.

USACE officials said that they are studying the Brooks Lake area to see how water diverted through the channel will affect bayous and lands west of the Lilly Bayou Control Structure to determine how the agency will have to account for all the flood water that will be routed through that area to the Mississippi.

In 2011, the Lilly Bayou Control Structure was the first major piece of the diversion canal that was completed. Located just west of U.S. 61, its concrete structure will allow water flowing down the future diversion channel to slow before a 45-ft. drop in the natural topography to the bottomlands and bayous closest to the river.

Sims explained that, depending on what the hydrological study finds, the USACE may choose to dig a channel to route the water leaving the control structure and headed to the river. He said the study is expected to wrap up in a couple of months.

?Louisiana Department of Transportation and DevelopmentFloodingInfrastructureLouisianaU.S. Army Corps of Engineers