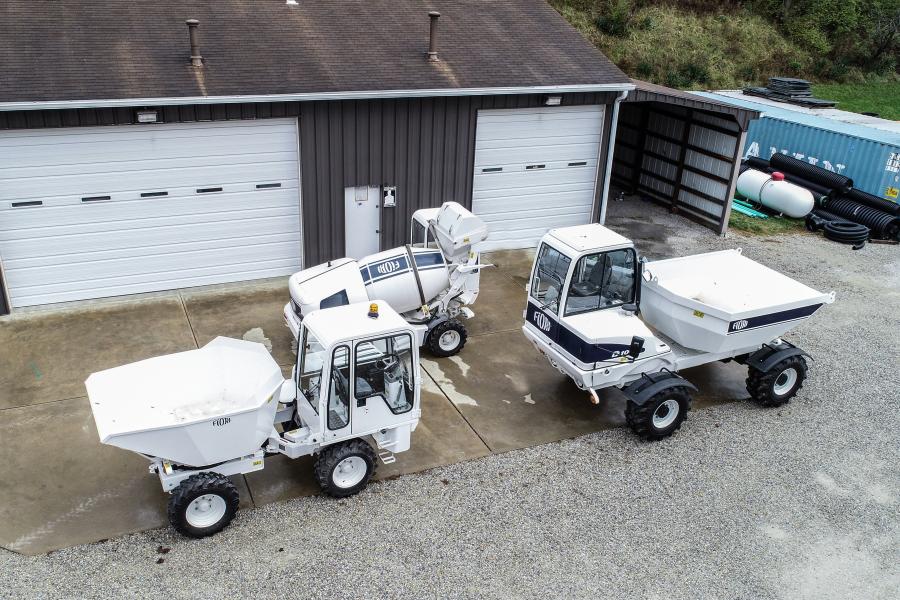 Jason Lapp, HP2X Construction project manager and estimator, said his crews will often use skid steers or rent cement buggies to move material and cement at confined job sites like those described. Since moving material that way on this job would take way too much time, they went looking for larger volume site dumpers.

Enter in the Fiori D40 Dumper

Soon they discovered the Fiori product line of equipment.

Harvey Pelley, HP2X vice president and co-owner, said he knew immediately that the Fiori D40 dumper was perfect for this job. It is the smallest dumper in the Fiori line: a 4WD, diesel-powered dumper with an articulated body. It has an 8,818-lb. loading capacity, yet at its broadest point is just 7.8 ft. wide. 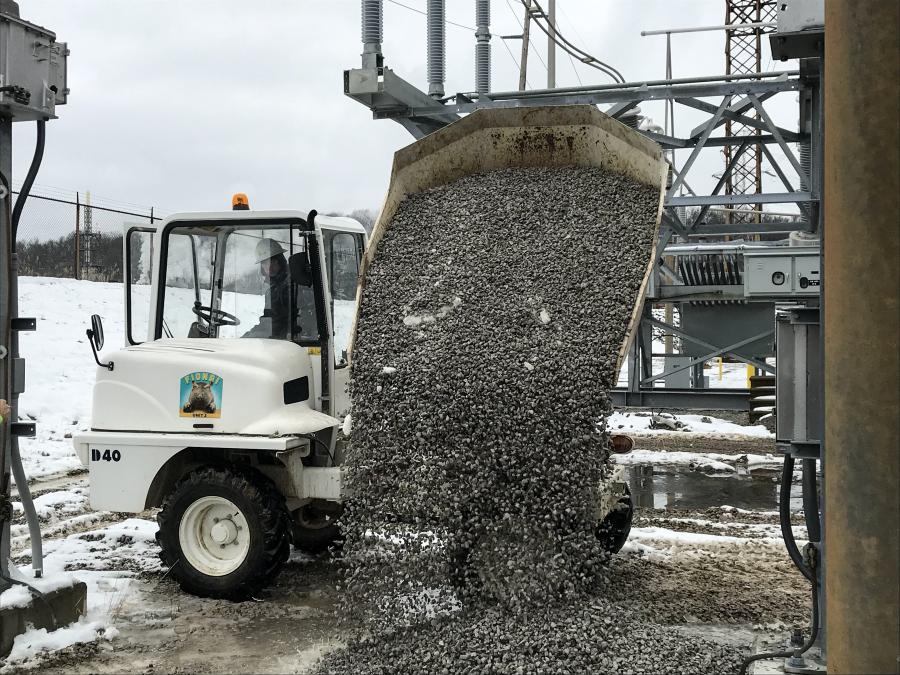 Other brands offered site dumpers with similar features, such as a 180-degree pan rotation that enables an operator to dump to the left or right of the vehicle, as well as straight off the end.

None, however, offer reversibility. An enclosed, climate-controlled cab is only available as an option on their models at extra cost. These are both standard features in the Fiori product line.

The cab was an especially attractive feature for HP2X.

"We work in Ohio," Pelley said. "Winters can be harsh here, especially driving around in an open vehicle at 20 degrees."

Pelley promptly purchased a D40 from Dominion Equipment Parts. Dominion introduced the Fiori line to North America in 2016. Headquartered in Richmond, Va., and perhaps better known as a manufacturer and distributor of rubber tracks, Dominion provides sales, service and product support from seven regional locations in addition to its Richmond headquarters — including one in Cincinnati, Ohio, not far from HP2X's facilities in Cleves.

The most distinctive feature of a Fiori site dumper is its reversibility. The entire operating station inside the cab pivots, allowing the driver to swing the seat and controls around to face the direction of travel. 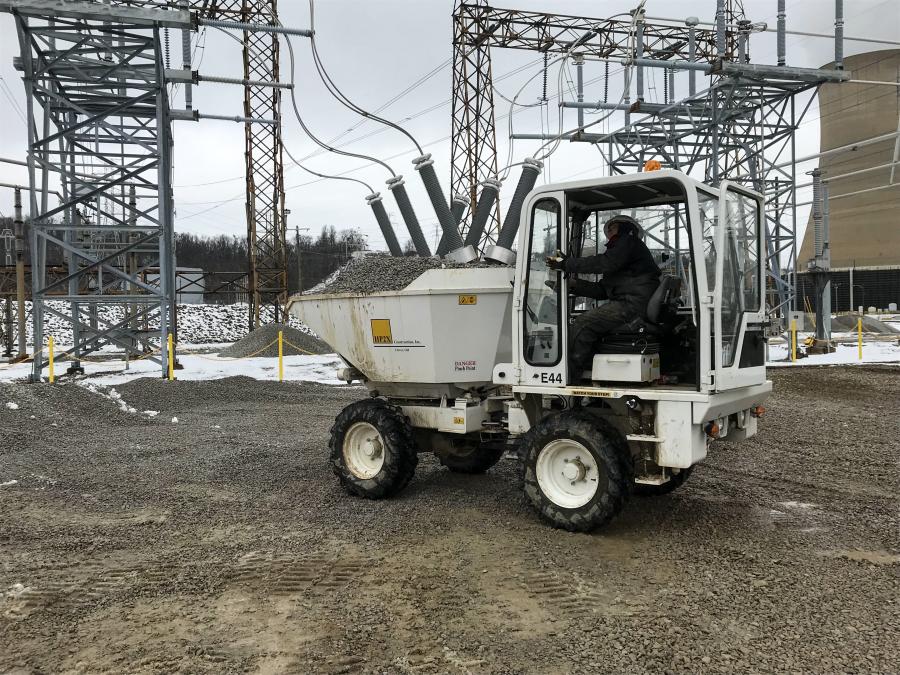 In a sense, the operator is always driving "forward" while traveling to and from the loading and dumping points.

Its reversibility has been well received for how it enhances worksite safety. Lapp said many of HP2X's customers require a spotter, or a "backer," whenever an operator backs up a rig. The unit's reversibility means they don't need one.

"And that means you're not paying for two people to operate a machine, one just standing there for eight hours watching," he said.

The D40 dramatically improved HP2X's operational efficiency so that within two weeks they bought a second one.

"I think at that point we already had the largest Fiori fleet in all of North America," Pelley said.

Then HP2X invested in a DB460 concrete batch vehicle.

It is a 4WD self-loading cement mixer system with four-wheel steering and a drum that can be oriented anywhere along a 240-degree arc. Like the Fiori site-dumpers, it features reversibility of travel.

Although the DB460 bucket makes it easy to manually load cement by the bag, they also purchased a mobile horizontal cement silo, increasing operational efficiency for bigger jobs.

"The mixer system is like having a mobile batch plant at a fraction of the cost of building, operating and maintaining its own," Pelley said. "The cost just to build a plant could run at least a half million dollars." He ballparked cement trucks at a quarter million each.

Jobs that HP2X can use its Fiori mixer system eliminate the need for a batch plant, cement trucks and transfer vehicles altogether. HP2X can make up the exact batch size needed for a specified mix design right at the job site, complete with a printed batch ticket. It also means they don't have to work around a plant's operating hours. Work can be done at night if a job calls for it.

The ability to adjust batch size saves HP2X money by reducing waste, and there are no partial batch fees. Plus, they can make up their batches at a significantly lower cost per yard than they can order them delivered.

To put it another way, HP2X can now pay itself to mix and deliver cement for every yard it pours. The savings represent a competitive advantage for bidding jobs.

HP2X put the system to work on its first job, making up precast work for a soldier pile and lagging job in its own yard.

Mixing is an automated process. "Get your mix dialed in," Lapp said, "and it's all push-button after that." Once HP2X has a mix fine-tuned, it's added to the onboard computer's memory. From that point on, the operator simply selects it from the menu of stored mix designs and inputs a batch size.

To begin, the operator uses the rig's integrated loading bucket to scoop up aggregate from the pile. Raised above the drum opening, the bucket functions as a hopper, its bottom hatch controlled by the operator. When the weight of material in the final bucket load exceeds what is required for that batch, "The computer tells the operator to shake a little out," Lapp said. A tip-off function lets the operator empty out the bucket to the correct amount.

Aggregate now loaded, the operator drives to the sand pile and repeats the process. At the cement silo, the mixer and silo communicate wirelessly as the DB460 bucket fills up the required amount of powder.

Next, the mixer adds water from its onboard water supply. The system factors in moisture already present in the aggregate to get the proper mix. Admixtures, if needed, are stored in the rig's admixture tanks. Their flow is also electronically metered and controlled.

Lapp said the equipment is perfect for their operations, but he sees endless possibilities for these machines in a wide variety of applications.

The D100 dumper would be especially useful for padding ditches or backfilling a pipeline trench, Lapp said. "Water lines, gas lines, sewers — pour fill from the side or straddle the trench, and then the driver just swings around to face the other way, driving out the same way they drove in."

Reversibility has another benefit he hadn't considered: "It extends tire life," Lapp said. Rolling in a straight line over abrasive materials like rock fill is easier on tires than repeatedly making hard turns on them.

Pelley said he and his wife, Jill Pelley, president and majority owner of HP2X Construction, believe so strongly in the reversible equipment that they founded a sister company in 2018 to sell them.

"That we use them in our own construction business makes us a unique kind of dealer," Lapp said. HP2X Equipment offers much more than sales and product support. They are application experts who know the capabilities of these machines firsthand and are fellow contractors interested in forming long-term relationships.

Although the Fiori brand is still unknown to many in the industry, Pelley believes it to be a wave about to sweep through the North American market. HP2X Equipment is now positioned to help the local industry get out in front of it — never having to look back over its shoulder.