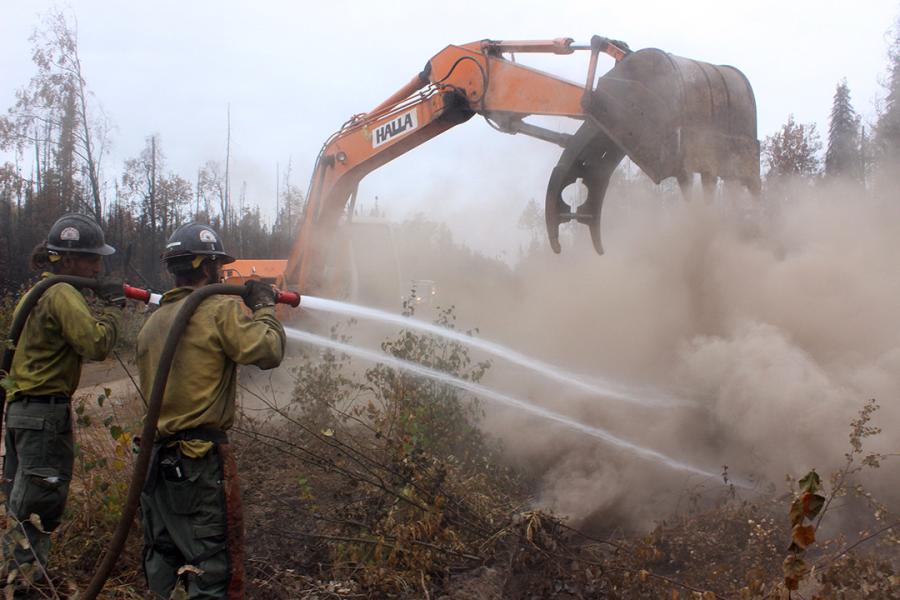 With the help of an excavator, crews on the ground fight wildfires in Alaska. (Alaska Division of Forestry photo)

The National Interagency Fire Center logged at least 48 large fires in 12 states last summer in the United States. When conditions set the stage for fire disaster, heavy equipment helps battle blazes. Putting in fire breaks to slow fire advancement, creating a safe area where firefighters can conduct burnout operations, and clearing out damaged trees are just some of the ways heavy machinery is necessary to fighting wildfires in the United States and abroad.

The Amazon saw more than 80,000 forest fires last year. Russia, Indonesia and Lebanon had record numbers of fires in 2019. In January, Australia was still fighting almost 40,000 sq. mi. devastated by horrific wildfires, after an emergency was declared in New South Wales this past November. 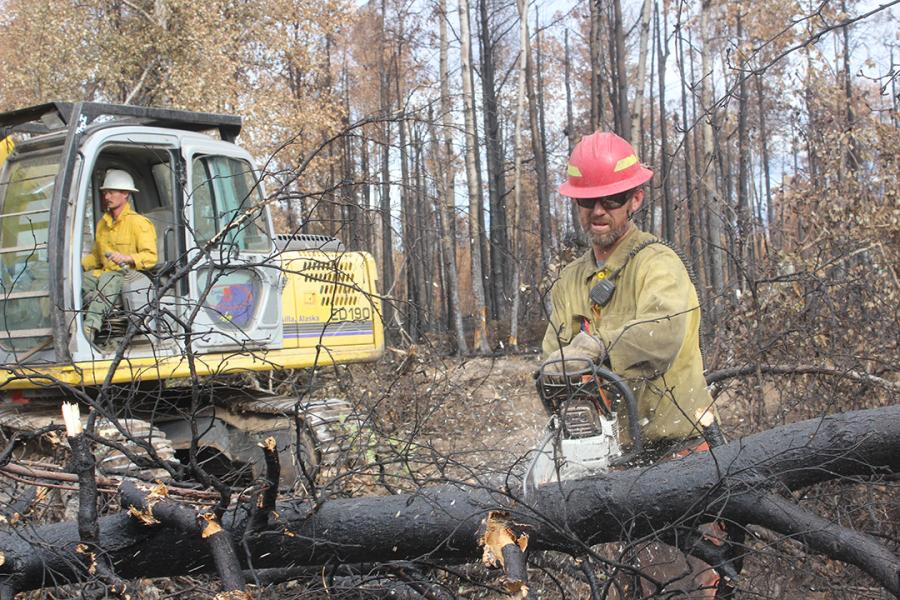 In California, 250,000 acres burned during last year's fire season. Last summer's Mt. McKinley wildfire in Alaska burned 3,000 acres. Working in tandem, equipment operators and firefighters battled that massive blaze, as well as seven other Alaskan wildfires. In Texas, crews tackled seven total blazes. Many fire-prevention organizations the world over don't have their own fleets of heavy machinery. Instead, they develop working relationships with equipment contractors and rental houses who mobilize both machinery and qualified operators to battle fires in their local and regional areas.

There are other reasons fire-prevention divisions depend on equipment companies. In Alaska, most of Alaska Fire Service's protection area is in the northern part of the state and off-the-road system.

"We also may not have an opportunity to use heavy equipment on fires due to the remoteness," she added. "However, there are occasions when a fire is threatening a community or other infrastructure, such as mining operations, allowing us to utilize heavy equipment already on location. During the pre-season, [equipment] owners contact local tribal or city offices to place available equipment on a list. We refer to this list in order to hire equipment that meets our needs."

The department also hires equipment and operators on short notice. The machines must be inspected by a qualified inspector before the contractor is hired to work on a fire.

"Otherwise, most of our AFS-owned equipment is used by qualified employees at our fire facilities at Fort Wainwright, Galena, and Fort Yukon mostly to move supplies and other equipment around before shipping it to fires," she said. 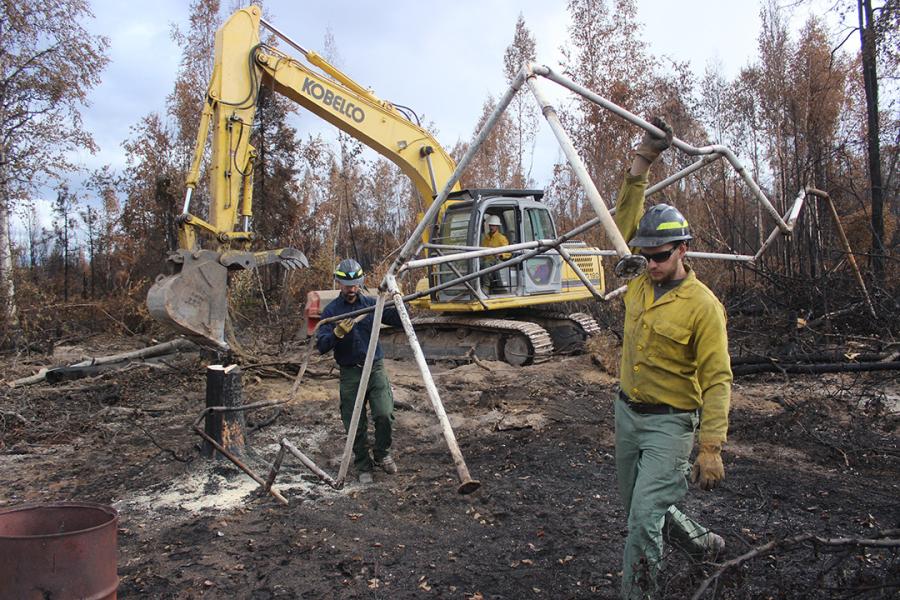 The state of Alaska's Department of Natural Resources Division of Forestry (DOF) protection area falls within more populated areas, said Ipsen. The division has a more robust equipment hiring program because they can utilize heavy equipment much easier and quicker than AFS can. "The McKinley Fire was a state-managed fire," she said.

Tim Mowry, DOF statewide public information officer, said that his department does in fact utilize heavy equipment much more so than the Fire Service, due to the fact that DOF's protection area covers most of the state's road system, where access to heavy equipment is easier and can happen quickly.

Also, there are some restrictions on heavy equipment crossing streams inhabited by anadromous fish, such as salmon, that spend portions of their life cycle in both fresh and salt water.

"We work closely with the Alaska Department of Fish and Game in that regard [i.e. getting permits, etc.]. Further, because Alaska has a lot of areas with permafrost, we are very careful about using heavy equipment in areas where it could do more harm than good," Mowry said.

Machine for the Task

In addition to airplanes, helicopters and firefighting trucks, in New South Wales teams used more than 750 vehicles and heavy equipment, such as bulldozers and excavators to move earth, clear areas of debris and create gaps in vegetation in the Australian state.

Mowry said all sorts of heavy equipment are used to fight wildfires in Alaska, but the most heavily utilized is the bulldozer. Bulldozers are favored mainly to create fire breaks by clearing land down to mineral soil to slow the advance of a fire and create a line that firefighters can burn out from, if necessary. They're also used to rehab fire breaks by placing material back in cleared areas during clean-up and suppression repair.

Excavators and graders, too, are used for fire line construction and rehab. Crews utilize feller bunchers to rapidly grab and cut trees before felling them. They also use relatively new hybrid machines called skidgens. The result of combining a skidder used for building logging roads and retrieving downed timber with a fire engine equipped with a water tank, pump and hose behind the cab, skidgens have been used in firefighting since about 2000.

In the McKinley Fire, heavy equipment aided firefighters in mitigating shallow-rooted, fire-weakened hazard trees, preventing them from falling on people, structures, roads or power lines. Heavy machinery also was used to clear road easements of downed trees and debris. Operators used tracked harvesters and excavators along with water trucks to spray debris piles for potential heat along roads in the fire area.

"The DOF owns a few bulldozers, but mainly we rent heavy equipment from vendors who sign up prior to the fire season and register their equipment in an online application system," Mowry said. "That provides us with a list of vendors statewide, so we know what kind of equipment is available in different parts of the state."

When there is a fire in a specific area, the department can turn to the online application system and see who has equipment close by, what kind of equipment they have and what kind of prices they charge.

"We can also hire equipment on site in the event it is needed immediately for initial attack," he said. "We then contact the vendors to hire specific equipment. All equipment must be inspected before it is hired to ensure it is up to standards and again after it has been used to document any damage that may have occurred. If there is damage, the vendor then submits a damage claim to the division."

Though post-wildfire reconstruction is usually what brings equipment contractors into the disaster discussion, in regions where wildfires are most prevalent, equipment owners are a critical part of wildfire-fighting strategy. While fire and forestry departments have the knowledge about how to fight fires, heavy equipment fleet owners and their operators have expertise in the best types of machinery for the specific firefighting task and can lend that expertise to immediate fire mitigation. If you have equipment that can be used, and you want to get involved, don't wait for the state fire-prevention officials to reach out to you.

To ready your resources as a wildfire mitigation service provider for local and regional fire and forestry departments, you should formulate a disaster plan that focuses on how you can help in any natural disaster that affects your part of the country, including a wildfire. In a blog on unique disaster restoration marketing ideas, BigRentz equipment rental company has other suggestions for developing a disaster resource plan:

"When construction companies work together with first responders and nonprofit agencies, you can create a powerful force to provide disaster relief," according to BigRentz. "Make sure safety is a priority while working on natural disaster relief projects. With the right equipment and preparation, you can help a community recover more quickly,"

Mowry believes the availability of heavy equipment makes battling wildfires safer and more efficient for everyone involved, but especially for state fire-prevention agencies.

"As the name implies, heavy equipment can accomplish a great deal in a short amount of time," he said. "Clearing miles-long fire breaks is much easier and quicker with a bulldozer than it is with a hand crew. Likewise, rehabilitating fire breaks is much easier with an excavator than doing it by hand, and cutting and moving trees with a feller buncher is much quicker than doing it with chainsaws."

Having equipment available on a statewide basis also allows the division to get equipment on-scene quickly, "which can be the difference between homes burning down or being saved," he added. CEG