Fire-Damaged I-85 Overpass to Open Ahead of Schedule

The crucial junction for Atlanta commuters and travelers is slated to be opened before the start of the vacation season. 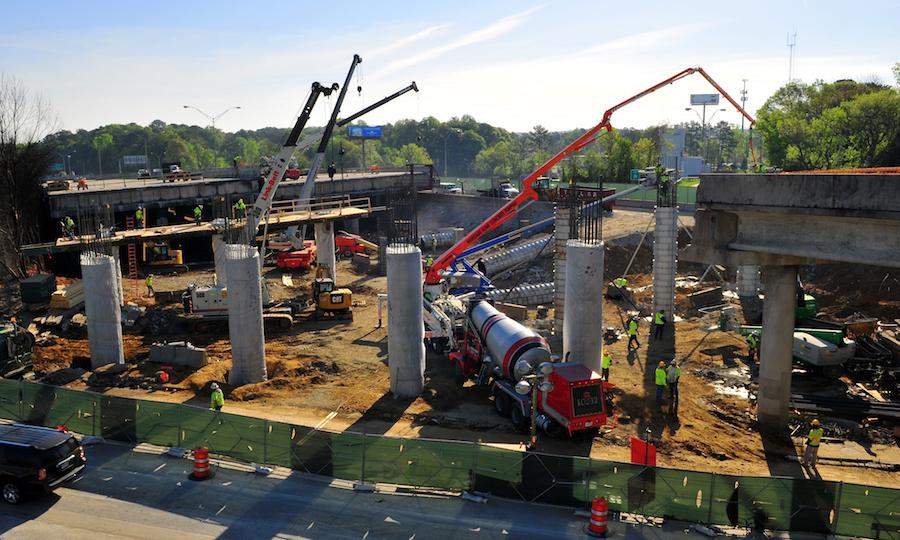 In tandem with the bridge-replacement project, since traffic had already been rerouted off the highway, GDOT decided to go ahead with 6.6 mi. of much-needed resurfacing of I-85 from I-75 to Clairmont Road beginning April 20

To the long-suffering commuters of Atlanta, the crews working to replace a damaged section of I-85 in just two months must seem like superheroes.

On March 30, a roaring blaze broke out during rush hour under an overpass of northbound I-85 at Piedmont Road, resulting in the collapse of the bridge around 7 p.m. In addition, the southbound overpass also was damaged beyond repair. In all, about 350 ft. of highway in each direction needed complete replacement.

Investigators believe a homeless man started the fire, which then grew hot enough to cause a failure of the integrity of the northbound overpass due to construction materials stored under the bridge.

The collapse happened along one of the South's vital transportation arteries and, in a city already notorious for its traffic problems, the disaster has meant road detours and closures, constant gridlock and driver headaches.

Within two hours of the collapse, though, Georgia DOT officials chose the professionals at C.W. Matthews Contracting Co. in Marietta to fix the highway and get vehicles moving up and down I-85 again.

The firm has deep roots in the Peach State and is responsible for many of Georgia's roads, highways and bridges.

The progress that has been made on the $16.6 million project on I-85 is nothing short of stunning.

The destroyed overpasses and roadway will be open for traffic again no later than May 25, said Dan Garcia, the president of C.W. Matthews in a statement earlier in May. That follows initial projections by the GDOT of June 15.

Garcia sees his company's night-and-day efforts to fix the fire-damaged section of I-85 in Atlanta as being one of the most significant projects in the firm's long history.

“We were honored to be selected to complete this critical project for the state of Georgia,” he said. “For 71 years we have helped build the infrastructure system in this state. We have a great team of employees that are focused on rebuilding this section of I-85 in a safe manner while maintaining quality as a top priority.”

On May 1, Georgia DOT Commissioner Russell McMurry expressed his assurance that motorists would be able to use the new overpasses before the start of the Memorial Day weekend, a fact confirmed by Garcia on May 8.

“Our goal was to get I-85 back open to the people of Georgia as quickly as we could, and to do that we offered incentives for early completion,” McMurry said at his May 1 news conference at the work site. “If work is able to continue at the rate it's been going, I have every confidence that C.W. Matthews will be able to meet, if not beat, the new target date.”

By May 10, the completion date had been moved up once again, and C.W. Matthews will receive up to a $3.1 million incentive for finishing early. The northbound and southbound lanes of the I-85 bridge over Piedmont Road in Metro Atlanta were projected to open to traffic by morning rush hour on May 15. The new opening date is nearly two weeks earlier than GDOT's most recent commitment of Memorial Day weekend, and five weeks ahead of the original projected opening date of June 15, according to the GDOT website.

“While this situation has been a tremendous challenge, the response from the people of Georgia has been nothing less than remarkable,” said Gov. Deal at a May 10 press conference. “It is extraordinary that in just six weeks, this critical piece of infrastructure is nearly ready to reopen for motorist use following the fire and bridge collapse.”

Garcia credits the company's field supervisors and hourly employees for keeping the project ahead of schedule.

“Our management staff has also done an outstanding job of planning and foreseeing any potential issues that may slow down that progress,” he said.

During those first hours after the collapse, C.W. Matthews mobilized its forces to provide light plants, message boards and traffic-control personnel. By the next morning, with the assistance of Cobb County and the Georgia State Patrol, the contractor had gathered up loaders and excavators to assist the D.H. Griffin Companies with the demolition of the still-smoldering bridges.

In order to get the job done as quickly as possible, all parties involved in the project planned for a continuous operation.

“We have been working around the clock since the night of March 30th,” said Garcia. “Our employees are working two shifts at 12 hours each. To accomplish our goals, we have approximately 40 employees during the day shift and 35 at night.”

The effort paid off quickly as eight days after the collapse, the demolition was complete and all the rubble removed.

Almost immediately, crews then moved on to the erection of the replacement spans, which number three in each direction. A total of 13 columns are in place to help support the six spans, including several existing columns that were salvaged and repaired from the old overpasses.

By mid-April, some of the 61 beams to be used on the new structures began arriving and by the end of the month, all of the beams were placed and concrete on the last span was poured on the evening of May 5, according to Garcia.

The northbound travel lanes of I-85 were already complete by May and once all six decks were placed, the crews with C.W. Matthews could begin the process of pouring the concrete barrier sides. Additionally, Garcia said work began on the grinding and grooving of the roadway surface, as well as the sealing of joints and the application of striping on the sides of the interstate in both directions.

“From the ability to quickly procure the construction materials needed, to the availability of work crews and good weather conditions, we've been fortunate to be dealing with best-case scenarios throughout this whole project,” said Mark Mastronardi, GDOT's director of construction. “The progress is apparent, but there's still work that needs to be completed before the highway can be safely opened to the public.”

C.W. Matthews has used a wide array of its own equipment to keep the work moving, including several Caterpillar pieces it had purchased from Georgia-based Yancey Brothers Inc., the nation's oldest Cat dealer. That list consists of two Cat 966M and two 972M wheel loaders, a Cat 930M model, two 321D's with hammer attachments, a 420D backhoe loader, a D3K and a D6N dozer and a 226 skid steer. Yancey Bros. also has rented the contractor two of the four Cat 308s with hammers used at the job site.

Cranes are an integral of the project and for those heavy-duty machines the contractor turned to Atlantic & Southern Equipment, with locations in Georgia, Alabama and North Carolina.

“The partnership between us and these firms and the many government agencies involved, especially GDOT, has been exceptional and is further proof that when all parties share the same common goal, the results can be remarkable,” Garcia said.

In tandem with the bridge-replacement project, since traffic had already been rerouted off the highway, GDOT decided to go ahead with 6.6 mi. of much-needed resurfacing of I-85 from I-75 to Clairmont Road beginning April 20. This was done to cut down on any additional travel delays and is expected to be finished by the time the I-85 overpass project is reopened.

Watch a time-lapse video of the overpass being rebuilt.