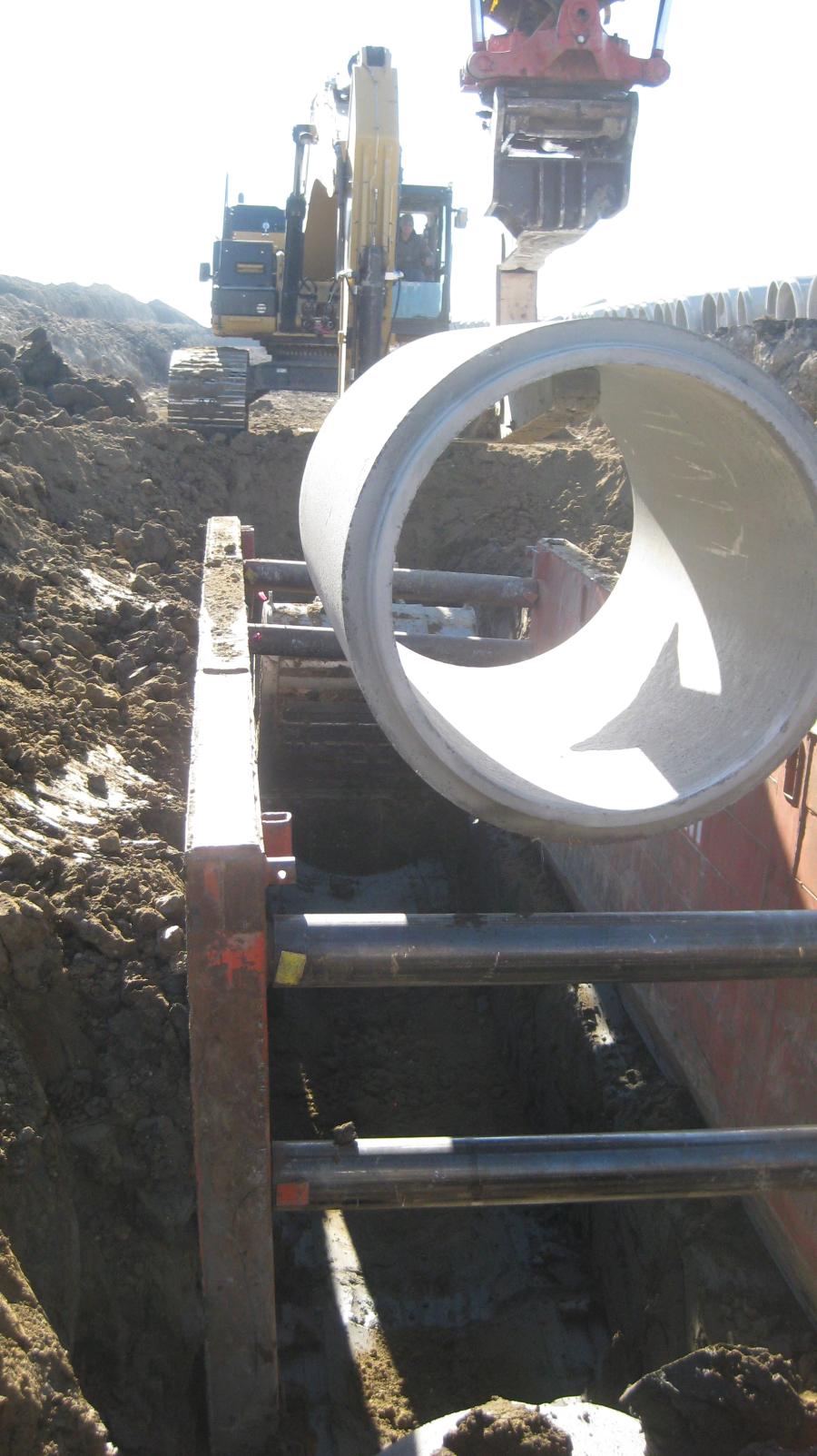 A ramp from the back of the trench box was used to lay the pipe with a custom-built pipe hook that was used with a Rototilt. With each pull of the box, Progressive Structures would lay a pipe, compact it with its modified compactor and push a road forward

When Progressive Structures, located in Elkader, Iowa, was originally established in August 2010 by Travis Augustyn and John P. Moyna, it had two employees, and the fleet consisted of one pick-up truck and a lease-to-own backhoe. Within five short years, the company has expanded to 13 employees and a fleet of 11 pieces of equipment, which consist of six excavators, two end loaders, a tractor backhoe, skid loader, and roller

Most of Progressive Structures’s jobs entail digging around underground utilities, which are very expensive to fix if damaged, so it’s imperative that it has versatile tools that allow it to easily maneuver around these utilities without slowing down production or decreasing the quality of the work. In 2011, Augustyn was introduced to Rototilt (formerly known as Indexator) at ConExpo in Las Vegas, Nev. Compatible with any excavator from 1.6 to 33 ton (1.5 to 30 t) capacity, Rototilt attachments have 360-degree continuous rotation and 40-degree tilt each way.

Since then, Progressive Structures has purchased three Rototilt attachments. The latest two are equipped with Rototilt’s pin grabber to pick up standard OEM buckets and a high flow swivel to operate plate compactors or other high flow tools under the Rototilt.

“I can’t imagine operating my business without them,” said Augustyn. “My crews can lay pipe two- to three-times faster, and more efficiently. We are able to maneuver around smaller spaces, in a faster time and with better efficiency than any other attachment I have found on the market. The versatility of this machine allows the crews to become more creative with their work and to also take on more challenging jobs.”

When it comes to customer service, Progressive Structures couldn’t be happier.

“They [Rototilt] personally flew to Iowa to install our new attachments, and have been out to visit our job sites multiple times. They have made us — and continue to make us — feel like we are their number one priority,” said Augustyn.

In October 2012 Progressive Structures took on a project in Emmetsburg, Iowa, to make drainage improvements to the farmland. A large purpose of this job was to catch all the rainfall in a wetland to help filter nitrates and other harmful chemicals to keep them from going into the rivers.

“We had 10 semis hauling this pipe non stop during this phase because they could only haul five pipes each load. We did our underground operation a little differently than we normally have in the past. We had one Cat 349 perform the subcut to get 10 feet of the top material off and a second 349 to pull a trench box to dig down to grade. We had a ramp in from the back of the trench box to lay the pipe with our custom-built pipe hook we used with our Rototilt. With each pull of the box we would lay a pipe, compact it with our modified compactor and push a road forward with a dozer. With this method our best day we laid 400 feet of 54 inch concrete pipe,” Augustyn said.

“This road is a significant improvement to the city of Des Moines. Before we started the job, this area was an industrial wasteland. Some areas where we were installing storm sewer were full of tires, car hoods, struts, you name it. The city and the contractors on this job have put a lot of effort into making sure this project is built perfectly. There is a lot of industrial traffic in this part of town, and the current infrastructure is not very efficient for the traffic volumes. This road will help that.”

“The storm sewer had to be installed under a live water main, buried electric and a phone line. We had to install a beam to support a live 8 inch PVC water main. We could not fit a trench box under the water main so we sloped out our trench using the Rototilt,” Augustyn said. “Digging around a lot of existing utilities was the norm on this job.”

Progressive Structures also used its Rototilt to replace box culverts in Humboldt, Iowa. Despite a 20-day schedule, the company finished the job in only five days.

“This was one of four box culvert replacement jobs we did this year. Each one took five days. We used an RT-80 Rototilt [the largest that Rototilt makes] on our Cat 329D. We did some custom hydraulic work to this machine to allow us to run our compactor and have full Rototilt functionality while being able to run the compactor. This machine allowed us the reach along with the ability to turn our compactor to be able to compact right against the box.”

With the new culvert installed, the slopes were safer and the water was discharging to the waterway at a better angle, resulting in less erosion during heavy rainfalls, according to Augustyn.

Quality and safety are paramount to the Progressive Structures’ team. They are not afraid of a challenge, regardless of how big or small. Augustyn foresees more high-risk jobs becoming available within the near future due to Iowa’s increased gasoline tax. He is looking forward to the challenge and is preparing by hiring new, experienced employees, promoting within the company, and keeping their employees up to date on all of the necessary certifications and training.