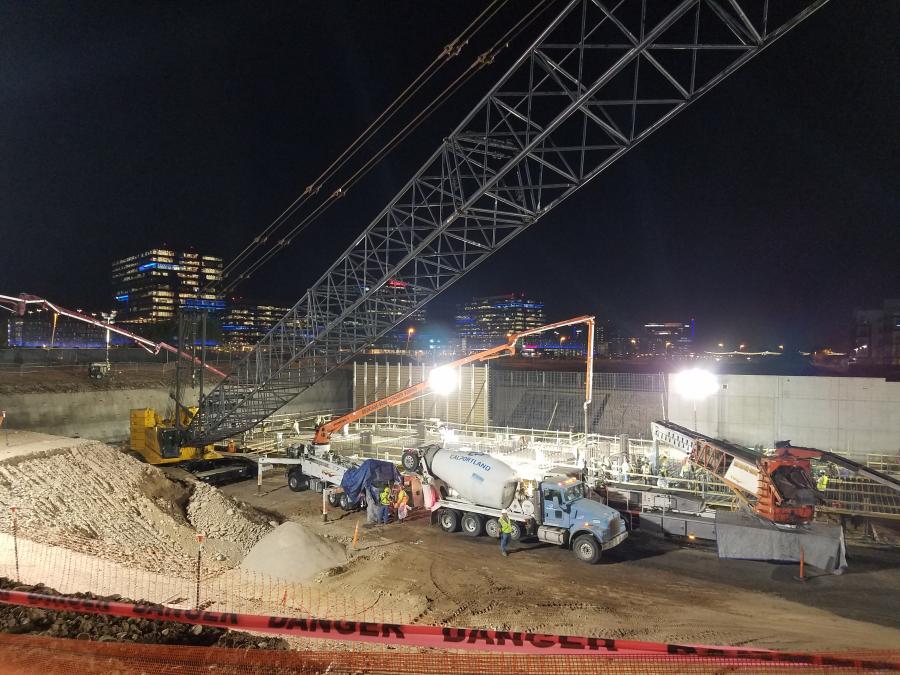 First phase construction valued at $126 million and covering 1.9 million sq. ft. will be rising skyward at the site of the Tempe Town Lake Watermark mixed-use development in Arizona.

The project is on the lake's north side at Scottsdale Road and Loop 2002. The project will take the concept of “mixed use” to a new level in Tempe.

“Fenix Development is scheduled to deliver Phase 1 in fall of 2018,” said Mike Loretz, project manager of Fenix Development. The first building, a 15-story office tower, will sit on top of seven levels of parking and include a penthouse on the 15th floor.

Higher up at level eight will be a sky lobby that will connect to a north parking structure by a 90-ft. skywalk. The Skywalk stands 80 ft. above ground floor retail shops totaling 18,250 sq. ft.

The office building's street level retail shops overlook Watermark Plaza and splash pad water feature, which is the center and focal point of the property. Target retailers will be mid-to-high-end food and beverage operators.

Floors nine through 15 of the office building will provide about 31,000 sq. ft. of office space. The 15th floor penthouse will feature 360-degree unobstructed views.

The office building will include more than 569,000 sq. ft. of overall building area. It will contain office space starting on the eighth floor that extends to the penthouse.

Second Building Is an Eight-Story Structure

The second Watermark building will span a total of 244,000 sq. ft. and stands eight stories or 104 ft. tall. It will include an additional seven-level parking structure and 25,656 sq. ft. of street level retail.

“Given the site's lake-frontage, easy access, abundant parking and proximity to the 202 freeway, we hope Watermark will become Tempe's new gathering place,” said David Norouzi, president of Fenix Development, after ground was broken for the project back in June of this year.

Okland Construction expects to eventually have 40 to 50 subcontractors at the project site. At full operation, the company expects to have 150 to 250 workers on site each day.

Mat-slab foundations distribute heavy column and wall loads across the entire building area, to lower the contact pressure compared to conventional spread footings. The foundations can be constructed near the ground surface, or at the bottom of basements.

In high-rise buildings, mat-slab foundations can be more than 6 ft. thick, with extensive reinforcing to ensure relatively uniform load transfer.

Also, because Tempe's Class A vacancy rate is among the lowest in the Greater Phoenix Metropolitan Area, Watermark office space will likely be in demand. The Watermark development is expected to serve tech companies, corporate offices and finance firms. That in turn adds to Tempe's employment growth.

Loretz also pointed out that the hotel, planned for Phase 2, will promote tourism and business in Tempe.

The entire Watermark project will be constructed in two phases.

A timeline has not yet been set for the second phase. Fenix is seeking partners for the hotel component.

Plans for the Watermark development have appeared in various forms dating back more than six years ago.