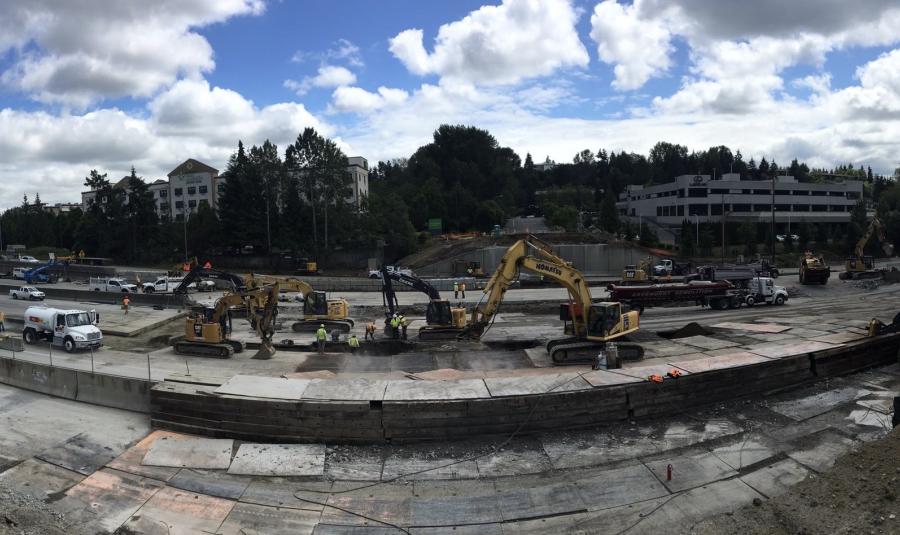 The joint venture of Flatiron and Lane Construction recently demolished the Main Street Bridge in Bellevue, Wash., a major component of the $705 million I-405, Renton to Bellevue Widening and Express Toll Lanes Project. This marks one of the largest ever design-build projects for the Washington State Department of Transportation. (WSDOT photo)

The joint venture of Flatiron and Lane Construction have made considerable progress on one of the largest construction projects in the Puget Sound region.

Crews demolished the Main Street Bridge in Bellevue, Wash., across Interstate 405, over the weekend of June 17 as part of the $705 million I-405, Renton to Bellevue Widening and Express Toll Lanes Project. 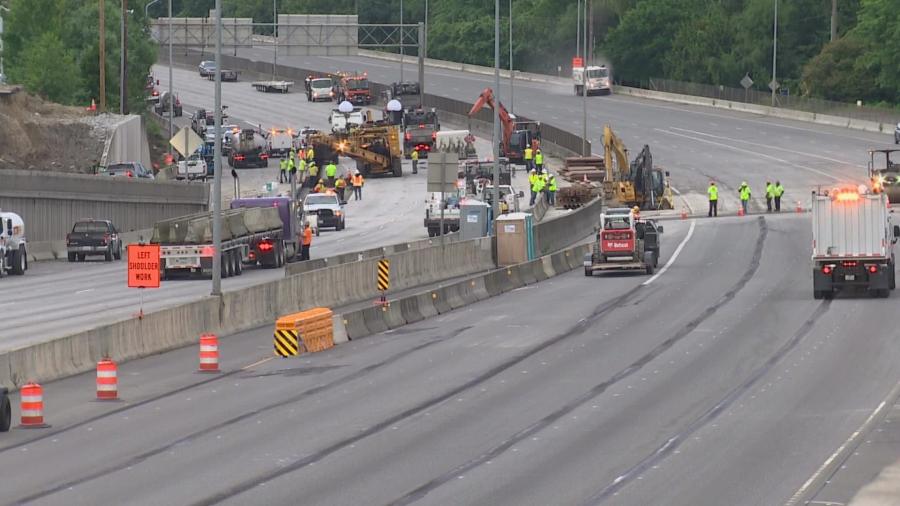 "One of the largest ever design-build projects for the Washington State Department of Transportation, this project will reduce congestion for drivers on Interstate 405, a main artery for Seattle's eastern suburbs," Flatiron said in a statement.

On top of the Main Street Bridge, more than 40 bridges also will be replaced, widened or undergo rehabilitation as part of the project. Plans have been developed to avoid completely replacing certain bridges, reducing cost and traffic impact on the busy 405 and surrounding roadways. Existing bridges along project will be brought up to current seismic standards.

The project also will be beneficial to area wildlife as well, with culverts being replaced with more environmentally beneficial fish passages.

As part of the Renton to Bellevue project, the Washington State Department of Transportation identified the need for the demolition and replacement of the bridge to make room for the additional lanes on I-405.

Once complete, the Renton to Bellevue project will add one new lane in each direction of I-405 between State Route 167 in Renton and Northeast Sixth Street in Bellevue.

The I-405 express lanes, along with a few general-traffic exit lanes at clogged interchanges, are scheduled to be completed by late 2024, a WSDOT project description said.

Aside from the Main Street Bridge demolition, key parts of the project include constructing 12 mi. of express toll lanes on the interstate between State Route 167 in Renton and Northeast 6th Street in Bellevue. It connects into a 40-mi. system of express toll lanes and supports the new I-405 Bus Rapid Transit System. Drivers will see a significant reduction in traffic congestion as a result of the new toll lanes.

Sound Transit is scheduled to inaugurate its Stride bus-rapid transit line there by 2026, reaching freeway stations from Burien to Renton and Bellevue.

The WSDOT-led I-405 program will include a 2.5-mile segment of the 42-mi. Eastrail where several projects are underway. By 2024, a paved walk-bike trail is scheduled to open on the wood-supported Wilburton train trestle, overlooking the freeway in Bellevue.

Overseeing the massive endeavor is Project Engineer Amy Moore, who was just recently selected as the recipient of the "Young Engineer of the Year" Award by Puget Sound Engineering Council (PSEC) for the year 2022.

"Amy was recognized for her excellent work as a project engineer responsible for supervising construction work on several major infrastructure projects, her leadership roles in the American Society of Civil Engineers (ASCE) Younger Member Forum and her services as an instructor for the Fundamentals of Engineering Review Course," Flatiron said.

Graduated from University of Washington with a Bachelor of Science degree in Civil Engineering, Amy has been a very active member with the Seattle Chapter of American Society of Civil Engineers (ASCE) Younger Member's Forum (YMF), where she is currently serving as president-elect.