Road closures and traffic disruptions caused by frequent flooding annoying thousands of south metro drivers of the Twin Cities of St. Paul and Minneapolis for years should no longer be a challenge. 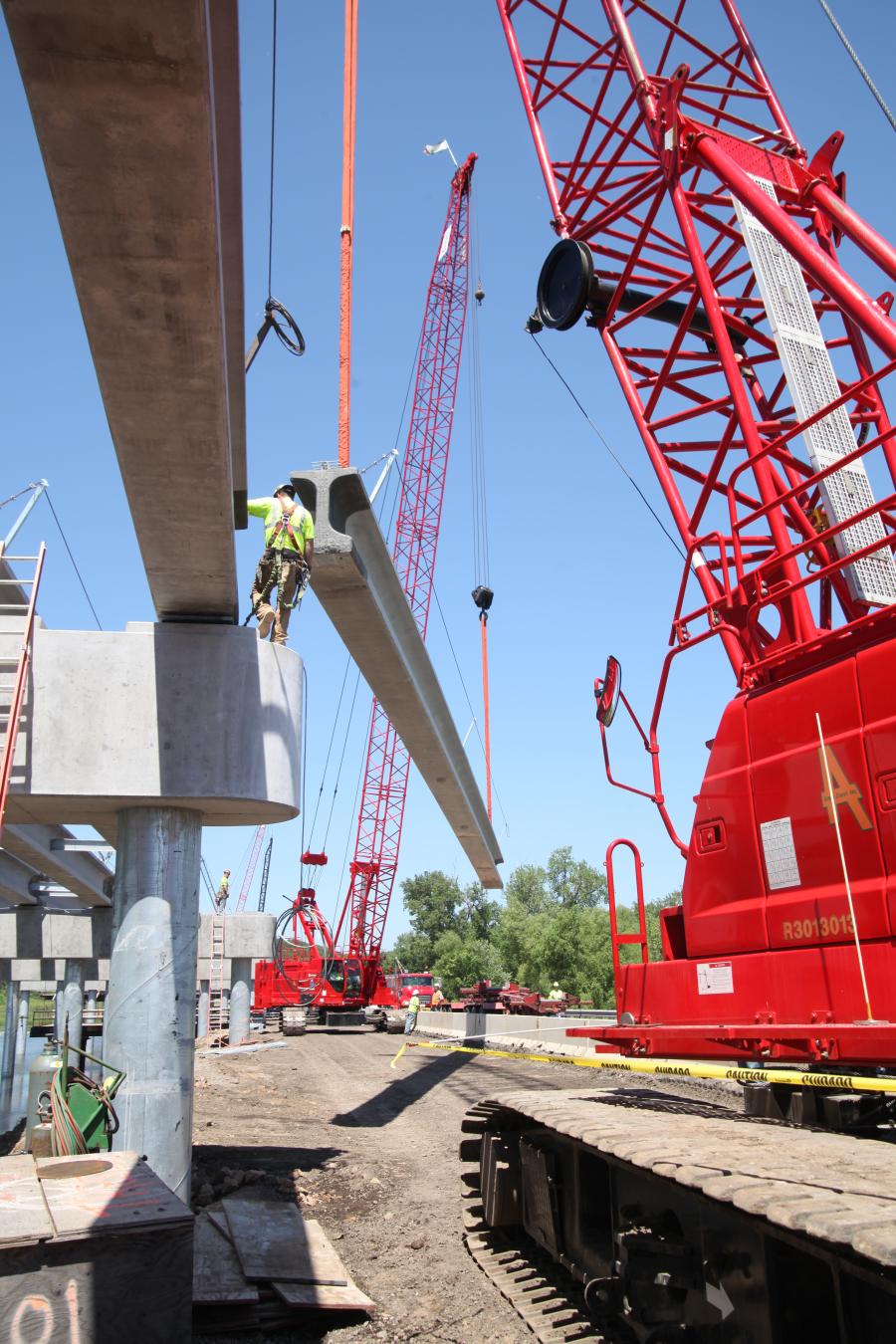 Crane operators run the controls of a pair of Manitowoc cranes for a girder pick while iron workers gently juggle them into place on the piers. Most of the pre-cast concrete girders weighed in at 80,000 lb. (36,000 kg) or more.

Road closures and traffic disruptions caused by frequent flooding annoying thousands of south metro drivers of the Twin Cities of St. Paul and Minneapolis for years should no longer be a challenge. After two years of digging, picking girders and pouring concrete, crews recently completed a 4,225 ft. (1,268 m) long bridge built to fend off 100-year flood episodes of the Minnesota River Valley.

The bridge replaces a low slung causeway crossing the river valley near water level. It carried TH 101, a popular commuter and trucking route for local motorists heading out of Shakopee, Minn., towards the Twin Cities 30 mi. (48 km) further north.

Complementary to the bridge work, crews constructed safety and capacity improvements to 2,700 ft. (810 m) of County State Aid Highway 61 (CSAH 61) at its intersection with TH 101 just north of the new bridge. This work included the construction of a large, 200 ft. (60 m) diameter, two lane round-a-bout to replace the existing “Wye” intersection.

Carver County and the Minnesota Department of Transportation (MnDOT) opened the bridge after a brief ceremony on November 24th, just in time for the Thanksgiving holiday travel season.

Ames Construction took on the project with a contract bid of $4.9 million. Founded in 1962, Ames began as a small, family-run earthwork contractor that served a community. Today, it has grown into a full-service, heavy civil and industrial general contractor that serves customers throughout North America. With corporate offices in Minnesota, its regional offices are located in multiple geographic areas in the United States and in Canada.

Sitting on 40 piers, the bridge deck is approximately 24 ft. (7.2m) above the old road at its highest point and the four traffic lanes double the capacity of the old road. It includes a 10 ft. (3 m) bike and pedestrian lane as opposed to paved, narrow shoulders on the original crossing. Like the bridge deck, CSAH 61 was widened to four lanes to better handle traffic volume with its connection at TH 101.

Carver County is the owner and lead agency on the project. The county partnered with (MnDOT) to provide management and project delivery, funding assistance, bridge design and contract administration services.

Over the two year construction schedule with the inevitable weather delays and site challenges “there have been hurdles to cross like any other construction project,” said Ben Hoefer, MnDOT project engineer. Yet, “it's been going well. Though at one point in the project, we decided to accelerate the project because we were behind schedule doing the pile operations.”

Located on the banks of the Minnesota River, Shakopee and its surrounding communities are home to Valley Fair, a 125-acre amusement park, the Canterbury Race Track and the Renaissance Fair. All three attractions bring in millions of visitors each year to this rural area of the Twin Cities.

Major, seasonal flooding of the Minnesota River Valley, which is characterized by a large expanse of flat, forested wetlands and grasslands made this project a priority for state, county and local officials.

Just over the last 20 years, flooding of the river valley has become more frequent. Since 2010, high waters flowing over the causeway closed the highway four times. In the early spring of 2011, significant flooding closed the causeway for 43 days, according to a MnDOT report.

The record flood crest for Shakopee occurred in the spring of 1965 when flood waters rose close to 15 ft. (4.5 m) above the causeway. Even if the river hits this mark again, the bridge will be able to remain open.

At the north end of the project site, crews graded out a bypass at the TH 101 and CSAH 61 connection to maintain traffic and make room for a large muck excavation.

Along the length of the causeway, traffic crews shifted the two lanes of traffic to its east edge to prepare a 20 ft. (6 m) wide work zone and access lane for equipment and deliveries to build the bridge. Here, pile driving operations began.

From the time the first bucket dug into the ground to the last concrete pour, it has been a project filled with site challenges and modern technology.

At the excavation site, a Cat 374D backhoe began scooping out bucket after bucket of muck in the area of the TH 101 and CSAH 61 connection at the north end of the project.

Dipping the bucket down as much as 20 ft. (6 m) and below the water table stirred up a muddy slurry making a visual inspection impossible, said Hoefer.

“From a quality control standpoint, the backhoe was equipped with GPS and onboard monitoring equipment so that the operator was able to determine the depth to which they needed to excavate, in real time,” Hoefer said.

Quality assurance was achieved through the collection of GPS data which allowed project surveyors to generate a 3D model.

“By visually checking for spikes and valleys of the model excavation bottom, we knew we had to remove more material here, or there, the muck was cleaned out really well,” Hoefer said. “Soil borings were then performed to confirm the validity of the process.”

The muck excavation became a project in itself as it ran early into the 2015 winter season. Digging ceased as winter took hold but started up early in March 2015. Working non-stop, the final buckets of muck came out in July of 2015 while the super structure of the bridge took shape, said Brian Siekmann, chief inspector of MnDOT.

With Manitowac and Terex cranes stationed on the causeway, pile driving operations soon hit a snag shortly after the July, 2014 start date.

“Despite everyone's best efforts, scoping, staging, phasing; we did not have adequate bearing capacity for the piles to support the design loads. So, a lot of the piling was driven much deeper than originally planned,” Hoefer said.

This had a huge ripple effect in terms of staff time, cost and schedule.

“At one point, a static load test (SLT) was performed to determine “actual” load capacity of the pile. This turned out to be quite the endeavor,” Hoefer said.

He ticked off a litany of added costs including labor, materials, equipment and sub-contractors.

“There are a lot of technical aspects to performing a SLT, including sub-contractors who specialize in hydraulic jacking and monitoring the loading and displacement of the pile. It was a concerted, very coordinated effort by all parties, with the prime contractor being the key player in building the test structure to very tight requirements. It was successful.”

At the administration level, “MnDOT was tasked with a tall order in that the contract change for the SLT was administered using force account methods; meaning that any resource applied to the work needed to be strictly documented. Every single piece of equipment, material and man hour was accounted for,” Hoefer said.

The static load testing also forced a change in the schedule and phasing of the bridge work.

“We had to build the bridge out of sequence,” said Gerritt Bangma, construction superintendent of Ames Construction. To get back on track, “we worked more hours and put more people and equipment on the job.”

The limited work zone set aside on the causeway also affected pile driving operations for the five piers built on the water.

“If we were able to close the entire road we could have used a large enough crane to drive the pile on the far side of the bridge,” Bangma said. By keeping the road open, “we were limited to a 110 ton crane for the most part. We built work trestles at each of these piers to get access to the far side of the bridge which were designed based on construction sequencing under Ames direction.”

Despite the scramble to get caught up on schedule and open the bridge before winter set in “overall girder lifting operations went well,” Bangma said. “We had 369 girders that were set on that bridge and most of them weighed about 80,000 pounds or more.”

Two, Manitowac cranes worked in tandem to lift the girders. During the girder picks, flagmen stopped traffic on the causeway completely for safety reasons, said Bangma.

By early April of 2015, all the separate pieces of the project moved forward.

Muck excavation continued as the bridge piers rose above the water surface and the first set of pre-stressed concrete girders were trucked in and hoisted into placed. Grading and sewer work on CCSAH 61 continued.

Even though the existing causeway was used for equipment stationing, lay down areas and deliveries, traffic flow, though slower and more congested, kept moving in each direction.

During the construction of the false work and girder picks, “we had flagmen out here continuously,” Siekmann said.

There were exceptions though.

During the concrete deck pours, crews shut down TH 101 and detoured traffic to another crossing approximately 5 mi. (8 km) away. Yet, traffic disruption was not as painful because the pours occurred through the night-time hours.

To keep the concrete pours progressing at a certain rate and not be disrupted by traffic congestion, “we poured at night to avoid supply issues,” Siekmann said. At the same time, “we had the advantage that we didn't have to fight the elements. The heat and wind are killers on concrete. Pouring in the night makes the concrete set-up faster.”

The deck pours began in the early evening hours and continued until 6 a.m. before the morning rush hour began.

Though the bridge and new highway are open to traffic, Ames crews will be removing the existing causeway through the winter months.

“We're looking at approximately 90,000 cubic yards of dirt to remove within 30 to 40 days with the winter weather playing a role in the schedule,” said Bangma.

With the higher and wider bridge now open, there is no doubt commuters are happy with the end result. Even though work will continue on the causeway through the winter of 2016, it will not affect traffic on the bridge. Minor punch item work will continue into the spring time.