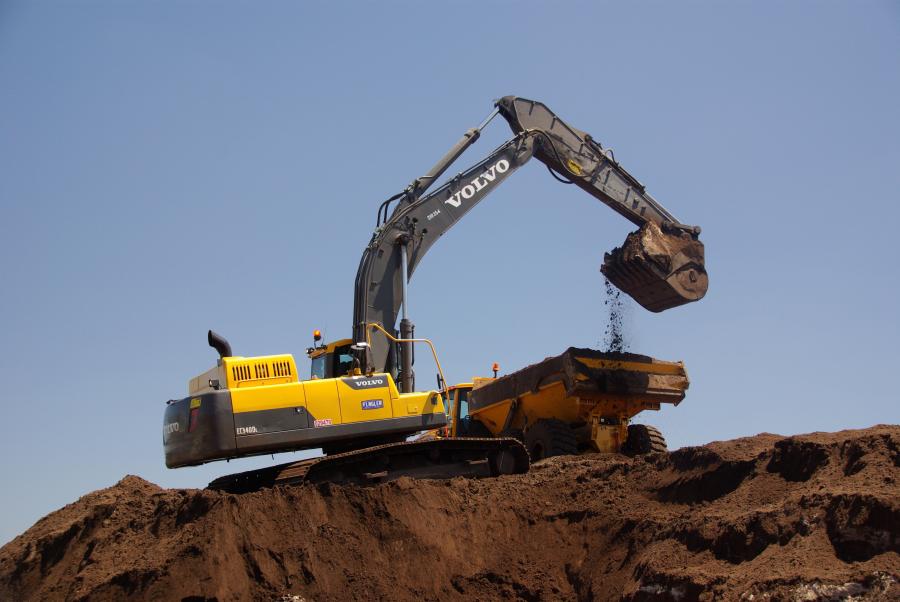 FDOT photo. The dirt from the mound is being placed in a nearby field on the $2.32 billion I-4 Ultimate in Orlando.

Because of its tropical climate and the most beachfront and coastline in the continental United States, the Sunshine State has always been heavily dependent on tourism for its revenue. In addition, people migrate to the state from all over North and South America to live and work, a major driver behind Florida's historically robust real estate industry.

So when the Recession exploded the housing bubble in Florida's most desirable communities, while also discouraging the normal flocks of tourists from visiting its beaches and theme parks, the Sunshine State was draped in one big, dark cloud.

What all that meant for the construction industry wasscores of delayed or cancelled projects. Thousands of jobs were lost and the money to pay for building projects largely dried up.

Almost eight years later, though, the state is in the middle of an economic comeback that many observers see as something just short of miraculous.

One of the architects of that comeback is Republican Gov. Rick Scott, a former businessman who came into office in 2010 with a promise to run the state like a business, while cutting taxes to encourage business development. In addition, he has increased funding for education, health care and the transportation infrastructure, while promising to add 700,000 new jobs in seven years.

The fact that the governor is attempting all of this in a state without an income tax is being scrutinized closely not only by Florida residents, but by national policy makers and government leaders as well.

While the fine points of Scott's initiatives are fiercely debated between Sunshine State liberals and conservatives, there is no question that transportation needs are getting a large share of attention from Tallahassee.

To illustrate that, the governor's 2016 to 17 state budget includes almost $10 billion to improve or build airports and seaports, with the vast majority of the spending set aside for roads and bridges. More than $3 billion is for new construction.

Bob Burleson, the president of the Florida Transportation Builders Association, which works as a liaison between the state and the construction industry, characterizes road building in the state in 2016 to be in “terrific shape”, which he added was obviously due in large measure to the rebound in the state's economy.

“Our contract volume is as much as it has ever been and I think that is even adjusting for inflation,” he said recently while driving from Tallahassee to Tampa. “With no income tax in Florida, we are highly dependent on sales tax, which means when the economy heads south and people don't come down here, we suffer.

“Our sales-tax collections are back up and we have a governor who, since 2010, has adopted the theme of 'jobs, jobs, jobs.' We have added a lot of new work and he is a really strong advocate of infrastructure spending, so not only has highway construction benefited, but airport and seaport construction as well.”

One look on the Florida Department of Transportation's (FDOT) website confirms that construction activity is currently on fire in the state as there are approximately 1,200 active contracts underway this summer.

Scott appointed Jim Boxold to serve as Florida's Secretary of Transportation in December 2014 to upgrade the transportation system and help find funding solutions for it.

Boxold said that number of active building contracts is a big increase from the previous several years when the recession had Florida in an iron grip.

“I think that you can go back to two or three DOT secretaries before me and see they were actually pushing out and delaying many, many projects,” he said. “I would say that about 1,200 active projects is about right, but there are 5,000 to 6,000 different things that we are working on developing.”

The result of all this is that now, as the state is welcoming its annual huge influx of vacationers, vehicle drivers in particular cannot fail to notice all the road and bridge work going on.

Although there are a few very-high-profile highway projects happening in the urban centers of Florida, with the biggest being the $2.32 billion I-4 Ultimate in Orlando, Burleson said that road and bridge work can be found in all parts of the state from Miami northwest to Tampa and Pensacola (where a $500 million bridge job is preparing to bid), then east to Jacksonville and back south again along heavily traveled I-95 on the east coast and I-75 further inland.

Burleson said that most of the interstate work involves improving, rehabbing and widening the existing highway, with some express-lane addition, all of which he considers normal maintenance.

“Florida is maybe a little unusual in that state law requires that before the FDOT can spend money on capacity they have to meet certain standards on all the roads and that is particularly those measurements that have to do with bridge safety and pavement conditions,” he said. “Back during the recession, FDOT was really just the Department of Maintenance, but now the rehab includes a lot of capacity improvement.”

Even with 350,000 new residents coming into Florida last year and an estimated overall 2016 population of 20.2 million, Burleson said that he didn't foresee many new-location roads being built in the state, other than streets for new subdivisions. Rather, there will be an abundance of new lanes added to the current highway system.

Within the FDOT budget, safety projects and priority maintenance construction jobs are funded off the top, Boxold said, but after that a formula is employed to distribute funds to different regions of the state for road work. That formula takes into consideration population and gas-tax revenue that reflects where people are and where they are driving, he said.

“On top of that, we have a significant amount of money in what we call our Strategic Intermodal System for projects that have a statewide benefit,” Boxold said. “That is money that we move around to different parts of the state to get priority projects done. We also utilize the public-private partnership (P3) model pretty extensively. We're trying to being very strategic about where we use those investments.”

But just how is Florida able to budget $10 billion for its transportation improvements, not just for the 2016-17 fiscal year, but for the last three years in a row, without an income tax to fall back on?

Although many are skeptical Florida's method can be sustainable over a long period, Boxold is more than happy to explain how it can be done.

“We have a very diversified revenue stream for FDOT's trust fund in that we rely on gas taxes, motor vehicle registration fees and, until recently, some documentary stamp taxes, which are taxes on real estate transactions,” he said. “Part of the reason our trust fund is so healthy, sort of like a well-planned retirement, is we are not stuck with only one source of funding and don't have to rely on the rise and fall of the gas tax. But a lot of it, too, is powered by Florida's economic turnaround.”

Just a few years ago, Boxold said, Florida was plagued with an unemployment figure at more than 11 percent.

“Today, we are down around 5 percent unemployed,” Boxold said. “We have record tourism now, too. I think we had around 100 million visitors last year and that adds up to a significant amount of revenue and tourism dollars coming into the state.

“We also do very well in construction, and I think that Florida has been outperforming most other states and probably the national average in terms of that growth, so the rebound has been quite significant.”

Just this past April, the FDOT's efforts got another boost when Scott signed into law HB 7027, a piece of legislation designed to deliver transportation improvements quicker and more efficiently.

The bill is made up of two main initiatives. The first gives FDOT the authority to assume duties generally held by the federal government to get state transportation projects going under the National Environmental Policy Act (NEPA). The upshot of that is Florida would be able to use what was federal authority to review or approve any highway project within its borders under any federal environmental law.

The second initiative in HB 7027 created the FDOT Financing Corporation, which means to keep costs low on large-scale projects by encouraging more competitive bidding and doing so through lower interest rates.

With respect to the NEPA portion of the bill, Boxold said that all of the state's road projects have had to go through a NEPA review, coordinated by the Federal Highway Administration (FHA), “so we spend an awful lot of time coordinating with FHA,” which, he said, slows down the development process.

“California and Texas have similar legislation in place and because of that have been able to get through project development a third quicker, which is pretty outstanding,” he said. “Time is money everywhere and particularly here since we rely on consultants on a significant amount of project development, so in the first two years after the delegation is in place we expect to save $44 million, monies that can be reinvested in other projects. It sort of double-downs on itself.”

Boxold said that, like other states, Florida has bonds for various types of projects such as right-of-way acquisition and bridge construction, but it doesn't have an easy way to finance what he termed an individual “priority project.”

“To do that, we have relied on the private sector, so what the finance corporation would do is allow us to get short-term bank loans and commercial paper or bonds in order to deliver a specific project. If you look at the I-4 Ultimate in Orlando or the I-395 project down in South Florida where we have got them four or five years out in our work program, the effectiveness of having this initiative is apparent. Again, you save time and money because the estimate is that material and labor costs will rise in the next few years. With this measure, we are getting these projects done at today's cost and getting them out for the traveling public quicker.

“This is what HB 7027 wants to do: get projects done better, faster and cheaper.”

Boxold said that Florida is fortunate to have Gov. Scott as its top executive because he understands the value of sound transportation infrastructure.

“It doesn't matter if you are talking about jobs, education or health care, you can have the best in the world but if you don't have a way to get to those things easily they do you little good.”