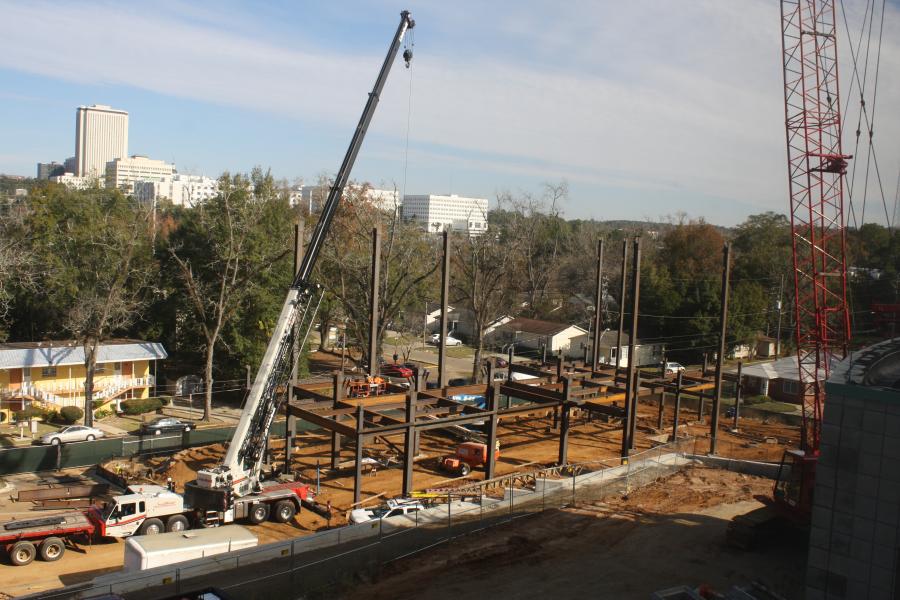 Anthony E. Norton, FAMU photo As part of an effort to elevate higher education in the state, Skanska USA is working to complete a multi-million dollar phase two expansion of Florida A&M University’s College of Pharmacy and Pharmaceutical Sciences in Tall

As part of an effort to elevate higher education in the state, Skanska USA is working to complete a multi-million dollar phase two expansion of Florida A&M University's College of Pharmacy and Pharmaceutical Sciences in Tallahassee. The five-story building is a more than 81,000 sq. ft. (7,525 sq m) addition to the existing structure.

“This project is important because the College of Pharmacy has secured a record number of grants, and has become a leader in securing research grants and conducting research on campus,” said Michael D. Thompson, who serves as the dean of FAMU's college of pharmacy.

“Currently, funding from the National Institute of Health has allowed the college to reach new funding levels that rival other colleges of pharmacy. Moreover, the college has more than $29 million in research and contracts for various health-related services.”

Building the research enterprise is a major focus of the dean's office, and is part of a ten-year plan known as Vision 2013-2023.

“The project is extremely important because it will accommodate researchers in one common space focused on research, rather than being divided among three buildings that we are housed in currently,” Thompson said. “The new building will help us in our plight to attract well-funded researchers and help build this program.”

The project has been in the works for at least five years and will have a lasting effect, said Thompson.

“New laboratories will allow us to remain current with state-of-the-art equipment and facilities needed to study more complex cases, as it relates to these disciplines. We have a strong research program in oncology, neuroscience and other areas, which require expansion if we are to remain competitive with other research programs across the country.

“The cost of the project has exceeded funds available at present. When funds are available, two of the floors will be retrofitted at that time. Meanwhile, we will make the absolute best of the space that we have on the remaining floors.”

Thompson said those spending time in the new building will be able to conduct research in one place, which will allow for greater collaboration with fellow graduate students and other investigators.

“Research faculty have been looking forward to this structure being completed for more than a decade. We are excited and we look forward to the kind of groundbreaking research that will take place in this long- awaited facility.”

Skanska, one of the world's leading project development and construction groups, is serving as construction manager. The first phase of the project included clearing/grading of the site, underground utilities, retention ponds/walls, parking lot and miscellaneous ground improvements.

“Since day one, we created a logistics plan that would allow us to complete all the tasks ahead, while ensuring the safety of the nearby pharmacy school building, situated in close proximity to the site for the second phase. Among the measures we have taken are setting up pedestrian safety signage along the entire perimeter of the work site. Also, we arrange for workers to come in and out of the site during the least busy hours on campus to avoid interruptions to daily school activities.

“At the project site, we are currently working on finishing the College of Pharmacy's building envelope. The tasks it involves include placing bricks on the building's west elevation, as well as installing the aluminum window frames and glass. While the framing work is in progress, we are also in the process of completing all the electrical and mechanical work on the project.”

The base sheet of the building's roof has been completed, as well as getting all of the mechanical equipment on the penthouse level. In addition, crews have started to place the stair rails, and are close to completing the installation of the elevators, with one of the two elevators already operational.

“As we continue with construction of FAMU's pharmacy school expansion, the next task we will focus on completing is the finishes on the building,” said Abou-Jaoude. “This phase will include the drywall and flooring inside the building structure, painting all the walls, placing the acoustical ceiling tile and completing work on the laboratories.”

At the start of construction, the project site required minimal excavation and removal of dirt because much of the underground infrastructure was already in place. The equipment at the FAMU construction project includes a 100-ton (90.7 t) crane that was used for the building's steel frame.

“We are also utilizing several smaller cranes to stage the bricks and set the materials and equipment on the roof's penthouse, a structure that houses the building's electrical and mechanical equipment,” Abou-Jaoude said. “Additionally, we've used boom lifts to complete the metal panels and joint sealant installation.”

The main materials being used on the FAMU pharmacy school expansion include 62,000 concrete masonry units and more than 320,000 bricks.

The project team has not experienced any setbacks since construction began and, to date, the elements haven't been a factor.

“Since we are in the process of completing the building envelope now, by the time the rainy season starts, the building structure will be fully enclosed and wet weather shouldn't affect the remainder of our construction work. During the winter months, Tallahassee gets cool weather, providing a moderate temperature that makes it ideal for building.

“The construction site was previously a retention pond and part of it was a surface parking lot, so we had to fill in the small pond with dirt and clear some of the asphalt, which required minimal site work. Since the site for the expansion is adjacent to the existing College of Pharmacy building, we will work on connecting the new building with the original structure as part of the project.”

Completing the building's steel structure has been one of the most time-consuming parts of the project.

“We needed to make sure the 100-ton crane that was used to build the steel structure was positioned in a strategic location to accommodate all ends of the building, since the size of the work site was limited and the pharmacy school's first building is within close proximity, creating some restrictions for the crane's movement,” said Abou-Jaoude.

“Additionally, the construction site was located in a slope, requiring us to build a construction pad to have a more horizontal surface that would allow the construction team to freely and safely move the equipment, such as concrete mixers, material transfer vehicles and booms, from one side of the project area to the other.”

The site sits on an occupied campus, making erosion control very important to ensure the pharmacy school could continue conducting business as usual. Crews installed the designed L-shaped concrete retaining wall early on in the project, as the first measure to protect any existing soil and foundation of the standing pharmacy building.

“Our Skanska team is proud to be making a positive difference on the campus and student body with the completion of this project. After several years of working together on FAMU's campus, Skanska continues to build what matters to FAMU, bringing cutting-edge technology and innovative features that will directly benefit the next generation of pharmacists.”

Florida Agricultural and Mechanical University is a public, historically black university founded in 1887. One of the nation's largest historically black universities by enrollment, FAMU is a member institution of the State University System of Florida, as well as one of the state's land grant universities, and is accredited to award baccalaureate, master's and doctoral degrees by the Commission on Colleges of the Southern Association of Colleges and Schools. The university is a member-school of the Thurgood Marshall College Fund.

Completion of the pharmacy expansion is expected by June 2016.