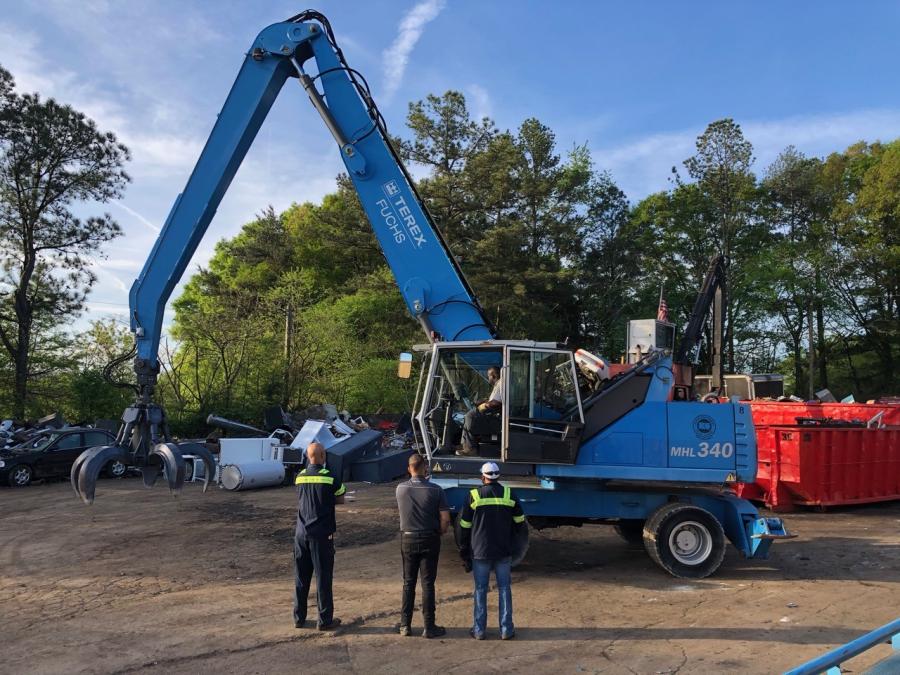 “It came down to just changing my mindset about buying a newer piece, really, and it was a move I am glad that I made,” ABC Recycling’s Adam Blank said of his recent purchase of a 2011 Terex Fuchs MHL340 material handler.

Adam Blank had used an old forestry crane for years to move scrap metal around his business northwest of Atlanta. Using the log-loader worked well enough, he said, and kept him from having to invest a lot of money on a newer machine.

Eventually, though, as ABC Recycling in Marietta, Ga., grew in volume, Blank began to weigh the pros and cons of acquiring a more up-to-date piece of equipment — one that was designed specifically for lifting and placing heavy steel scrap.

"We were running an old crane, something a lot of scrap yards use, so it was just a matter of me deciding between wanting to go with a loader designed for moving trees, rather than scrap, but with lower price points and efficiency, versus spending a couple hundred thousand dollars on a newer piece of equipment," he explained. "I also could have spent $30,000 on another old log-loader like this one, but even with two of these machines on hand I still wouldn't be getting the efficiency I really needed."

Instead, Blank contacted Mike Schulz at Kuhn Equipment, located in Summerville, S.C., just outside Charleston, about buying a newer machine that would easily handle the tons of scrap metal moving in and out of his yard, as well as significantly boost ABC Recycling's overall production.

"He needed to upgrade to a material handler, so I sent him three options on a quote and then I called him and said, ‘Look these over and then let's talk about your yard, your volume and your expectations," Schulz said.

As a result, Blank decided to forge ahead in buying a 2011 Terex Fuchs MHL340 material handler, a machine renowned for being among the top recycling and scrap-handling models in the world. With its substantial reach and high-load capacity, the MHL340 is built with rock-solid stability and a tough boom designed to ensure operator safety.

The well-made Fuchs MHL340D looks pretty imposing when its arm and cab are each extended to their full height — something akin to a Transformer from the movies. Weighing in between 60,000-64,000 pounds, depending upon the attachments being used, the machine also stands out with its distinctive blue color. 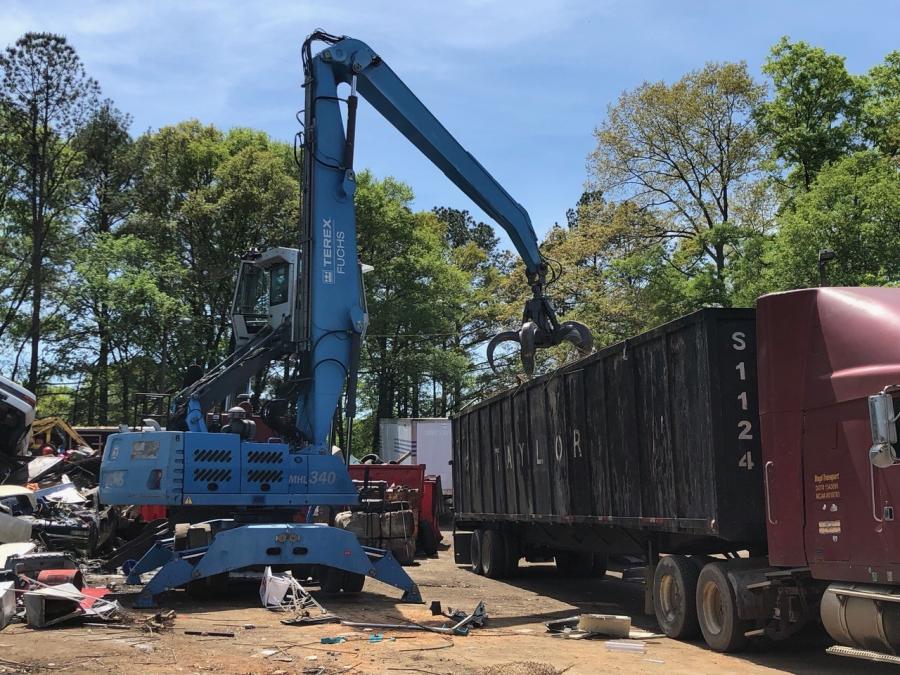 "It came down to just changing my mindset about buying a newer piece, really, and it was a move I am glad that I made," Blank added. "I have to tell you, too, Mike was just a fantastic guy to work with —a real straight shooter. He and a technician came over here, gave us a tutorial and made sure everything was good. The customer service was through the roof. They were only going to stay one night but decided to extend their visit another day when Mike said, ‘We're not leaving until you are comfortable with this machine.' You don't see things like that from many people and I thought it was just terrific on their part."

Before transporting it to Marietta, Kuhn Equipment ran the Fuchs material handler through its refurbishment shop to make any needed fixes and to fine-tune the machine to make sure it worked like new.

"ABC Recycling had never operated a material handler, so I brought my best mechanic with me to Marietta when the company took delivery," Schulz explained. "I knew if I didn't, I would be doing both companies a disservice because his people would not know how to work it, which would have blown back on me because they would think the machine didn't work properly."

A Machine Perfect for Scrap Yards

Instead, Blank said the Fuchs was much easier to operate than he thought and after only two months of using the machine on his three-acre scrap yard, Blank is effusive in his praise of the equipment.

"This machine is bigger than anything we have had before in that it has a massive, 6,000-pound, five-finger grapple," he explained. "We were using a two-finger grapple before, but we made the best of it. This Fuchs is a mobile machine and the lift is great, too. The cab can hydraulically-elevate up to 18 feet high so we can see what we are loading inside a container, whereas before we didn't have that ability. It also has air-conditioning and a nice stereo inside it, too, which just makes the working conditions for my guys so much better. 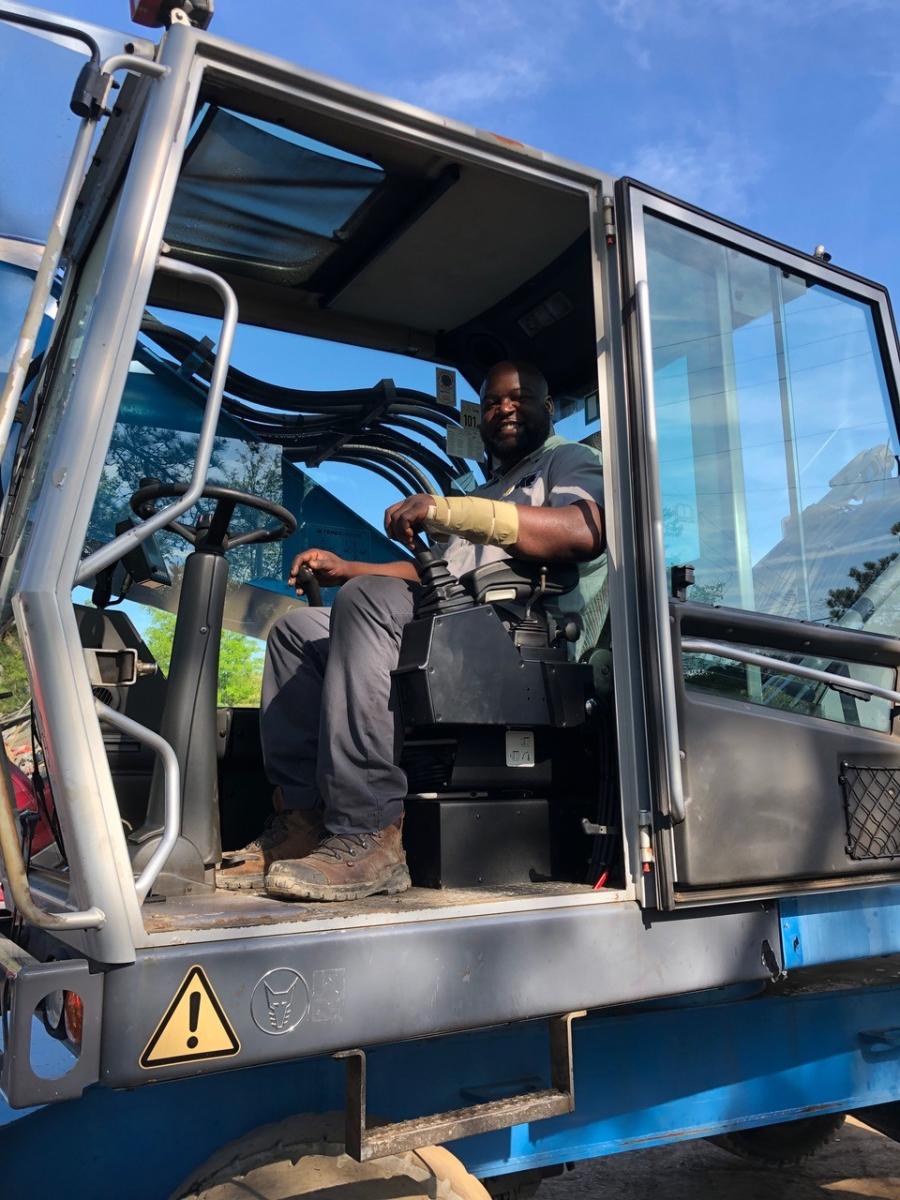 "Quite honestly, the technology will tell you if there are errors during its use, which makes it so much easier on the operator because he doesn't have to listen for problems."

Blank said that beyond increasing the efficiency of his scrap operation, having the material handler on the job has instilled pride into everybody using it while becoming a staple tool in the yard.

ABC Recycling also sees a huge benefit from the Fuchs MHL340's arm reach. The old machine in the scrapyard only had a sweep of about 22 feet, according to Blank, while the Fuchs reaches more than 40 feet out, a fact that obviously increases his company's productivity.

It also gives the scrap-metal recycler much better lift capacity than in the past. Depending on the needed reach, the four-point ground stabilizers on the wheeled Fuchs allows the machine to pick up around 30,000 pounds, Blank said. In comparison, the old log-loader maxed out at about 7,000 pounds.

"The Fuchs is very stable with the four outriggers on it but, as a mobile unit, it is constantly moving and working for us," he added. "We move on average about 120,000 pounds of steel scrap a day now with this machine and it is so much easier to accomplish."

A Lifetime as a Scrap Dealer

Although he is a "third-generation scrap guy," Blank proudly noted that he founded and nourished ABC Recycling himself in 1995. The facility handles ferrous metals (those containing iron, such as alloy steel, carbon steel, cast iron and wrought iron) and non-ferrous metals – the latter including aluminum, copper and brass. Blank's operation is a feeder yard for ferrous metals to be collected and shredded, while all non-ferrous metals are sent directly to scrap mills. To perform these jobs, ABC Recycling employs 16 people.

The company is well-known in the area for its handling of demolition and industrial scrap, and offers a wide range of industrial services ranging from drop-off, unloading and returning of its roll-off containers, as well as providing custom containers and actual demolition services. Automobile scrap metal, electronics, appliances, car batteries and lead-acid batteries also are processed at ABC Recycling. Blank owns another company, Atlanta Polymers, that takes in and recycles plastics.

He credits a big part of his recycling business' success with being located in the dynamic greater Atlanta area.

"We are on a small parcel of land but one that is on a major thoroughfare, Cobb Parkway in Marietta, making it a wonderful location," he continued. "We do a tremendous amount of what we call ‘peddler business,' which is getting scrap from people coming to us. Plus, we have a whole industrial side, too, where we have a couple hundred roll-off containers so trucks can move scrap in and out from demolition sites and manufacturers."

When wrestling with the decision as to whether he should buy the Fuchs MHL340D, Blank said his many years in business gave him the clarity to weigh his options logically.

"I realized that at times you take baby steps in buying equipment. You try to save money by buying older equipment, but sometimes that's not the wisest thing to do. In the end, it was a good move to buy this newer Fuchs material handler – what I would call a ‘big boy' move for us."