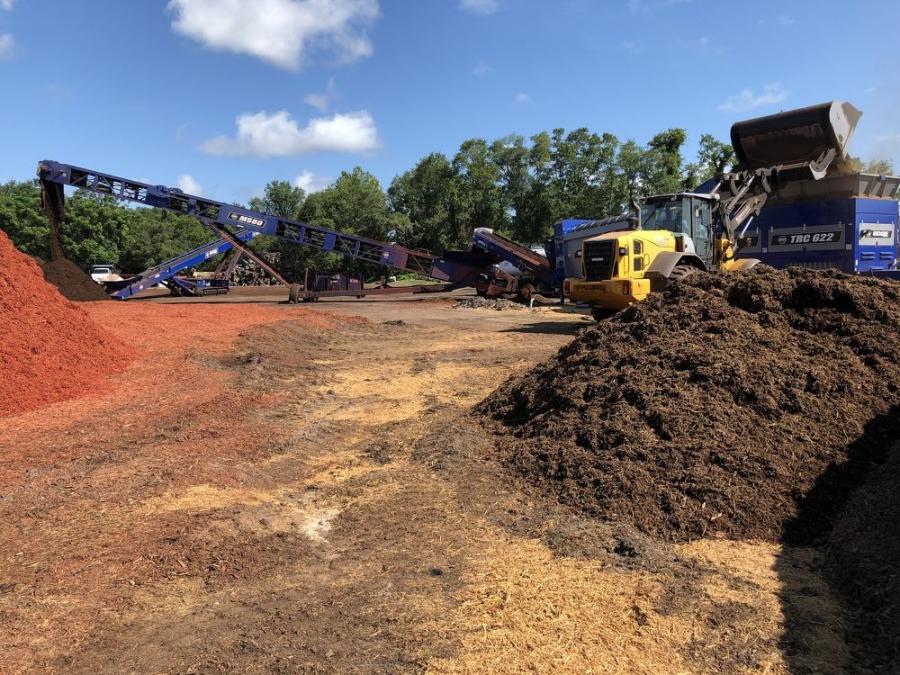 With the Edge TRC622 trommel the company went from producing 250 to 300 yds. of colored mulch an hour to more than doubling production with the machine.

One might be surprised to know a 25-acre recycling yard in an industrial area of Wilmington, N.C., filled with big equipment processing giant piles of old trees and vegetation, also is a model of neatness and efficiency. 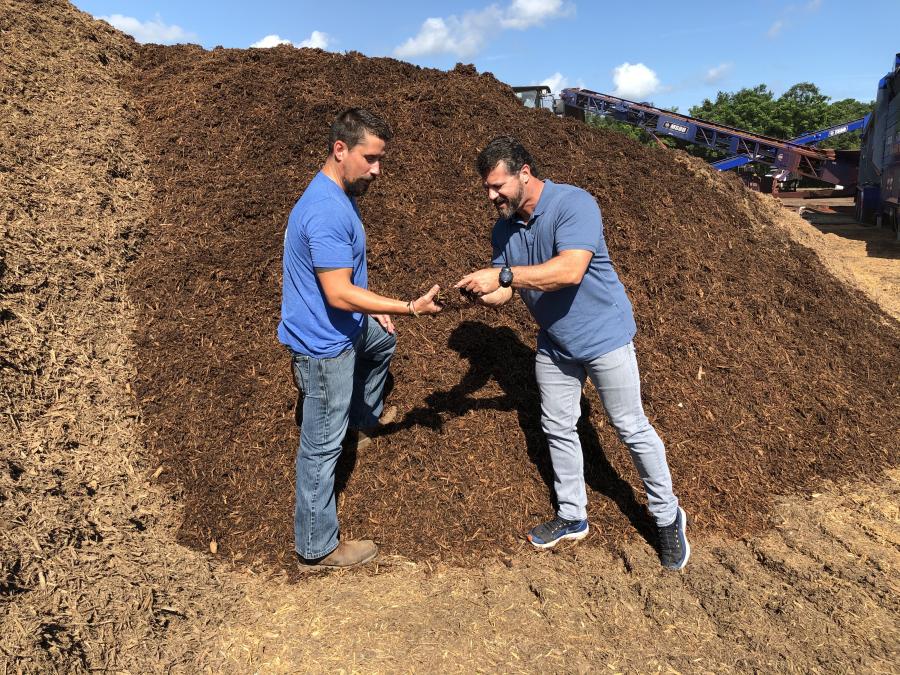 In the case of Wilmington's American Property Experts (APE), all the equipment not in use at the recycling business is clean and lined up perfectly. Even the huge piles of unprocessed plant waste are smartly arranged.

That's due to APE being owned by Jason Thompson, a former Marine given to crisp efficiency and orderliness that he believes is one factor in the success of his dynamic company. His agile business sense has fashioned APE into one of North Carolina's largest wood debris recycling companies.

The business employs 22 people across two locations in the coastal city, from which it provides a variety of services, including processing vegetative debris for fuel, creating bulk mulches and soils and recycling old concrete into stone and gravel. Additionally, Thompson said APE also performs land clearing and grinds the debris on site for projects like a new Lowe's Home Improvement complex or a Super Wal-Mart.

The larger APE site and main office is situated just south of downtown Wilmington near the Cape Fear River. On the north side of town, a smaller, eight-acre site is located near the airport. Each yard has a variety of trucks and equipment, including excavators, skid steers, haulers, trailers, screeners, grinders and specialty pieces, such as Thompson's new Edge color trommel that allows his crews to dye tons of mulch into different colors.

At its core, APE takes in huge amounts of vegetative waste from landscapers and construction site clearances before processing the raw material using its stable of machinery. At APE's south Wilmington location alone, Thompson said, the company gets 150 to 200 trucks full of tree and plant waste per day. 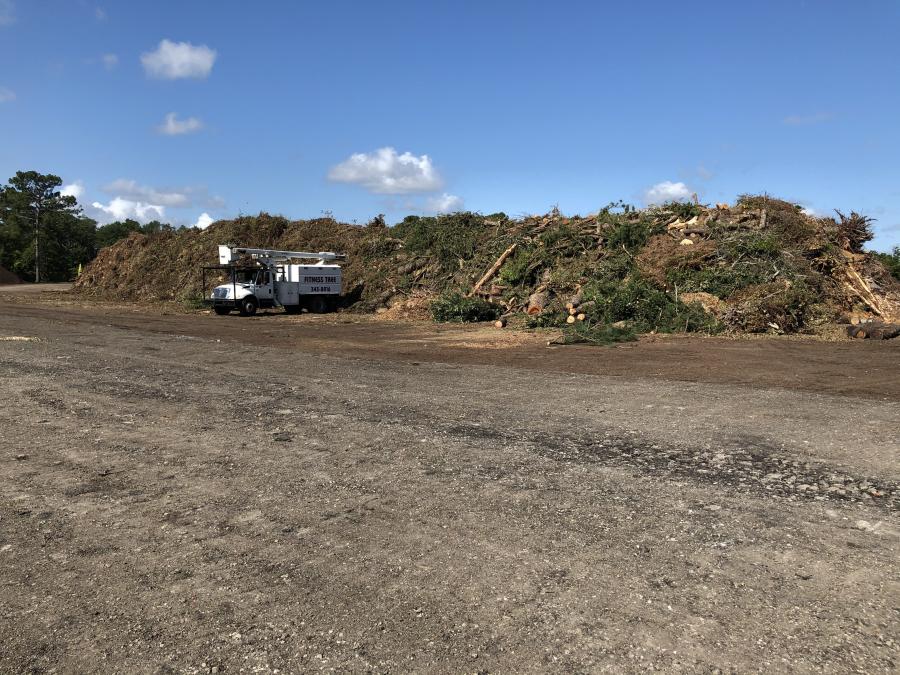 "Then, we sort it, grind it and sell it either as a boiler fuel, which was my main business for 20 years, or into colored mulches, which has been our secondary product for the last several years," he explained. "We call ourselves a comprehensive vegetative recycling facility."

Besides the plant waste collected through state, county and local municipal contracts, APE also takes in storm debris, too.

"Every year for the past 20 years we have been the preferred Federal Emergency Management Agency [FEMA] site for storms in this area and, unfortunately for this region, hurricanes have been a common occurrence," he said. "But they also generate big business for me."

After opening APE in 1997, Thompson's business concentrated on turning plant debris into boiler fuel and selling it to corporations that operate cogeneration plants to produce their products, such as paper mills. Cogeneration facilities use boiler fuel to generate electricity and heat, making them self-sustaining.

"There are several of these plants within a 300-mile radius that we sell to, such as International Paper, Georgia-Pacific and Green Power EMC," Thompson said. "We make what they would call ‘hog fuel' and then we haul it off to them with our trucks. They will blend it with natural gas infusion, crude oil and coal to get the highest BTUs at the lowest cost per ton."

But a conversation with a client several years ago spurred Thompson to diversify his business and offer a new product that has proved to be most beneficial to APE.

"One of my largest boiler fuel customers, somebody who was doing well over a million dollars per year with us, called and said, ‘Hey, in two years, we're phasing out boiler fuel use and going straight to crude and natural gas.' And I was supplying them with 1,500 tons of fuel a year," he recalled. "Obviously, I had to figure out something to do. I had worked a little bit with colored mulch because I saw the market potential, but we soon began producing much more of it and, in that first year, I think we did 25,000 to 30,000 yards of the product. This year we will sell 150,000 yards of colored mulch."

APE Chose Hills Machinery to Get an Edge

To process the tremendous amount of raw vegetative material APE takes in to make mulch, Thompson carefully selects the equipment he believes will create products that meet his specifications.

Besides the excavators and dozers to stack and sort the piles of old plant debris, he runs, among other pieces, three Morbark grinders and a McCloskey 621 trommel.

"Then, I bought the most impressive mulch coloring machine I have ever seen in my life, the Edge TRC622 trommel," he said. "We bought it a few months ago from Hills Machinery and went from producing 250 to 300 yards of colored mulch an hour to now being able to make 750 yards with that machine." 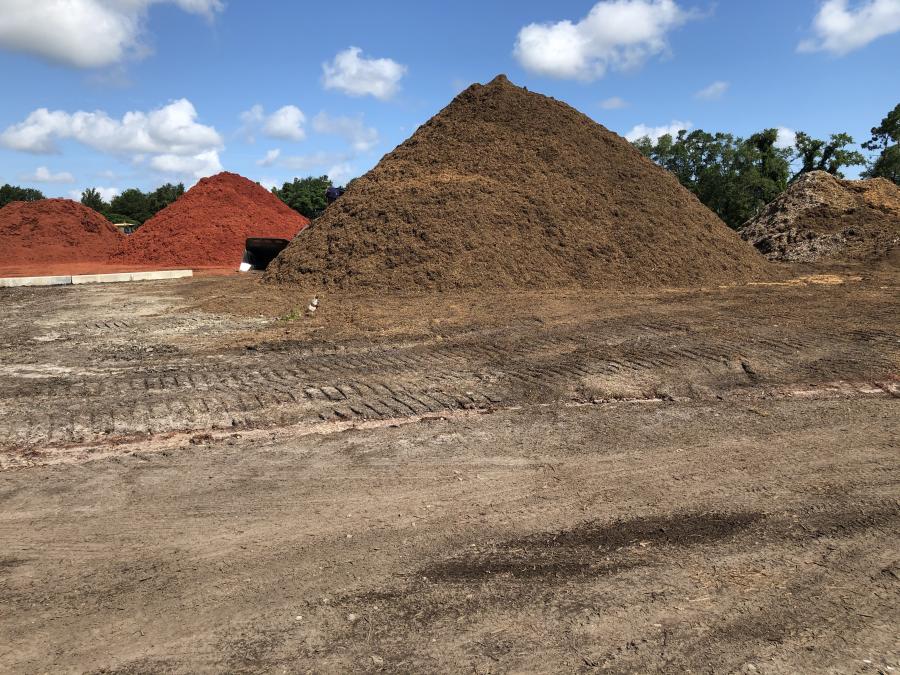 After the grinding process is complete, APE trucks move the material to a processing area where it moves through the Edge trommel and comes out as either black, chocolate or red mulch.

The quickness and efficiency of the Edge is boosted because Thompson invested in a huge, 5,000-gal. water tank and buried it in the ground next to the trommel so it could operate with an unlimited water supply. To get the large amount of production APE wants from the Edge, having the underground reservoir "makes all the difference in the world," he said.

"I looked at a lot of different machines in five years and I am a big believer that the best technology and the best efficiency gives you the best results," Thompson continued.

The Edge was purchased by Thompson through Hills Machinery's newest service, Hills Environmental, a division specifically designed to meet the needs of crushing, recycling and organic material handling customers.

"The service and support that I got from Ralph Cotterman at Hills Environmental was outstanding," Thompson said, "and I pay a premium to get the best."

Indeed, Cotterman and Hills Environmental went above and beyond to get the Edge trommel into Thompson's hands.

"It was terrible timing that I needed my machine delivered and set up during the earlier part of the coronavirus, but Ralph made that work for us," he said. "He spent days with us because due to the travel ban, Ralph couldn't get people to fly in to help us figure out how to use the Edge. It was a little dicey in the beginning, but he stuck with it and together we learned how to make it work."

Thompson said APE now has a high market share of the wholesale mulch business within 175 mi. of Wilmington.

That high level of success is directly attributed to Thompson's business savvy and high standards. But he also makes a point of carefully listening to and learning from his customers.

For instance, he acquired his secondary Wilmington location by purchasing a competitor's business, one that also sold colored mulches. Included in the deal was the former owner's customer list. 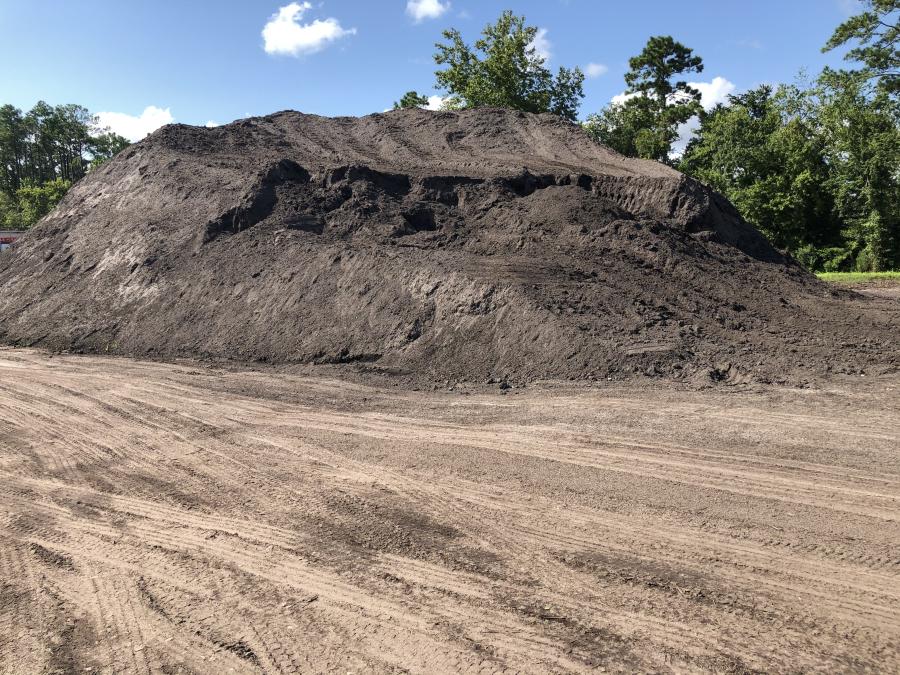 "So, I just went out to meet his customers and talk to them," Thompson said. "I learned that my biggest competitor was overpromising and under-delivering. I heard ‘Yeah, I placed my order and they would say it would be there in four to five days and it might show up in 10 to 12 days.' Hearing that, I enacted a rule that states when a customer places an order, APE guarantees delivery in 72 hours, and in five years I have never missed that guarantee. Even though I may be a little bit more expensive per yard, every company switched to me because I made sure their bins were full, and they never missed a sale."

Thompson also vows that APE sells 100 percent recycled mulch, rather than what he calls "tree-killer" mulch sold by some vendors.

"We won't sell virgin wood — ours is all reused and repurposed. When environmentally and economically conscious customers come in, they can buy recycled mulch rather than the alternative. And I focus on that fact in my advertising through TV spots and YouTube videos."

To make certain APE remains among the top recycling companies in the Southeast, Thompson has a clear-eyed vision of how he intends to navigate through the unpredictable economic future.

"Well, I'm going to continue to focus on the dual markets so that I don't caught with all my eggs in one basket like I did five years ago with just boiler fuel," he disclosed. "Now, colored mulches and boiler fuel account for roughly the same as revenue sources."

While giving a tour of APE's Sunnyvale Drive location, Thompson proudly pointed out how his sense of organization, no doubt sharpened during his time in an elite branch of the military, has helped to make his company more efficient and ready for the unexpected.

"You can see my Marine Corps background and all my uniformity — every truck is the same, every trailer. That way everything is nice, neat and squared away. We are totally self-enclosed here — our own fuel, diesel and gas — so if a hurricane hits, we have enough to sustain us."

Hills Machinery (and its environmental division) has eight locations across North and South Carolina, including branches in Charlotte, Raleigh, Greensboro, Asheville and Greenville in the Tarheel State. In the Palmetto State, Hills Machinery operates stores in Charleston, Columbia and Greenville. The full-service equipment dealership's website is www.hillsmachinery.com. CEG